Supplies of a Rare Cancer-Killing Compound Were Dwindling...Not Anymore 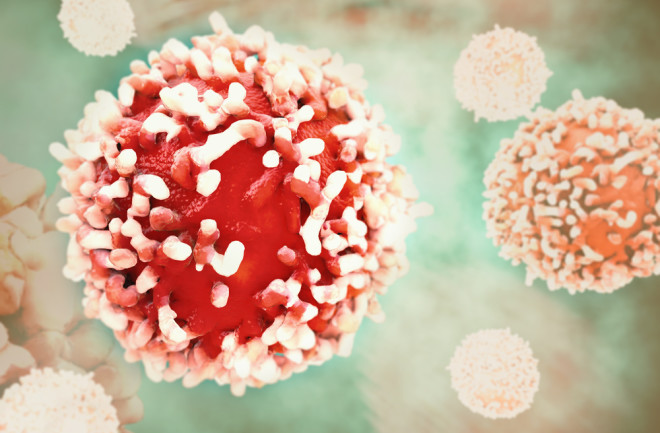 Artist's interpretation of a cancer cell. (Credit: Shutterstock)Bugula neritina is a rather inconspicuous marine organism. It looks like purplish seaweed, but it’s actually a branching colony of individual, tentacled zooids (the technical term for individuals in a colonial invertebrate) that resemble badminton shuttlecocks. It’s abundant, invasive and widely viewed as a pest as it accumulates on ships, dock sides, buoys and intake valves. It might also contain a cure to some of humanity’s most devastating diseases: cancer, HIV, Alzheimer’s. That’s why, 30 years ago, the National Cancer Institute led a massive effort to harvest these creatures from shallow waters off the coast of southern California. You see, B. neritina is the natural source of bryostatins, and scientists had discovered that these compounds, namely bryostatin 1, could be potent weapons in the fight against cancer.

An up-close view of a mature section of B. neritina. (Credit: California Academy of Sciences) In all, NCI harvested 14 tons of B. neritina specimens and sent them to labs where they were grinded, filtered, distilled, and refined into just 18 grams of powder that was pure bryostatin 1—a yield of 0.00014 percent, if you’re keeping count. The entirety of the harvest could barely fill a miniature salt shaker, and for the next three decades researchers the world over would rely on this inventory for their work. Bryostatin 1 is incredibly potent: a single gram can treat 1,000 cancer patients or 2,000 Alzheimer’s patients, according to current clinical dosing levels. For basic research, labs only need a milligram or two—which can cost tens of thousands of dollars. But over the years a little here and a little there has eaten away at the bryostatin 1 inventory, and we’re running out. And replenishing that supply has proven difficult (more on that later), but Paul Wender and his team at Stanford University may have found the solution. They developed a process to synthesize bryostatin 1 in just 29 steps, and, most importantly, it yields two grams of the compound. That’s 10 percent of the total supply we started with 30 years ago, and it can all be done with equipment you’d find in any university chemistry lab. “We certainly have shown that we can produce, through total synthesis, a solution to a clinical supply problem in real time. That’s a rarity for molecules of this complexity,” says Wender, who is also a science advisor for Neurotrope, a pharmaceutical company with a monetary interest in bryostatins. Wender and company published their findings Thursday in the journal Science. Bryostatin Problem Here’s why it’s been so difficult to replenish bryostatin inventories: B. neritina doesn’t actually produce the compound. Rather, according to the leading hypothesis, a symbiotic bacteria in the gut of B. neritina makes it. How, and why, this unknown bacteria species produces it is still unclear, but in the wild, bryostatin protects B. neritina larvae from predators. Fish are repelled by the substance.

Bryostatin 1 Over the years, various labs and companies have attempted to farm B. neritina in tanks, or even collect more. But the zooids and bacterium don't always cooperate. Aquaculture attempts failed because B. neritina didn’t produce bryostatin in captivity. Missions to harvest more from the ocean have been hit-and-miss because B. neritina doesn’t continually produce bryostatin. It only does it when when a narrow range of conditions call for it. Moreover, collecting actual specimens is costly, the yield is too low and the process disturbs already fragile ecosystems in the sea. “You pull one organism out of its ecosystem it won’t produce in the same way. Remove that and they become unresponsive,” says Wender. Splicing bryostatin-producing genes into a known bacteria like E. coli is one route, but the genetic hardware required for such a feat is still unknown. So, with other options proving elusive, synthesizing it from scratch has been the most viable solution. But it's been a bit of a Mt. Everest for chemists. The only reported successful synthesis of bryostatin 1 required 57 steps, and it only yielded a few milligrams of the stuff; many other groups have tried with varying levels of success. Wender’s team scaled that down to 29, and produced a high enough yield that the process can easily be scaled to supply all the needs of future researchers. In other words, the supply issue is solved. And now the fun really begins. Like Flying Bryostatins are so appealing to medical researchers because they are activators of protein kinase C (PKC), a family of enzymes that control the function of other proteins. To keep it simple, PKC enzymes play a crucial role in the way cells signal information. The allure, therefore, is using bryostatins to help the immune system target harmful cells like cancer. Earlier research into the efficacy of bryostatin 1 as a cancer treatment yielded mediocre results, but scientists likely haven't explored the true potential of these compounds due to supply constraints. A 2009 study, for example, halted further study of bryostatin 1 for treatment of non-Hodgkin lymphoma to await the development of newer analogs. To find them, we need more raw material.

Paul Wender (Credit: Stanford University News) “The future of bryostatin is going to be in its ability to make cancer cells more visible,” says Wender. “It activates these cells, brings them out into the open, and allows the immune system to target them and kill them. HIV eradication, cancer therapies...that’s where the promise is. Bryostatins are also correlated with enhanced neural function and the formation of new synapses. Animals that are treated with bryostatin learn behaviors faster, are conditioned more rapidly and they remember what they've learned for a longer period of time. As such, bryostatins are also showing promise treating Alzheimer’s. But now that Wender’s team has discovered a solution to the supply problem, there’s no telling where researchers will go next. For example, Wender’s team created a few bryostatin analogs, or bryologs, by altering a few of the steps during synthesis. These new compounds could yield other, unknown, benefits. Wender compares the bryostatin-synthesizing revolution to harnessing the forces involved in flight. “If you learn how to create heavier-than-air aircraft, you can create gliders, 747s, helicopters and everything in between. You have the wherewithal to solve new problems wherever they might be,” says Wender. “These analogs might have very special optimized uses for things we have yet to uncover. The availability of material was key factor holding this back.”