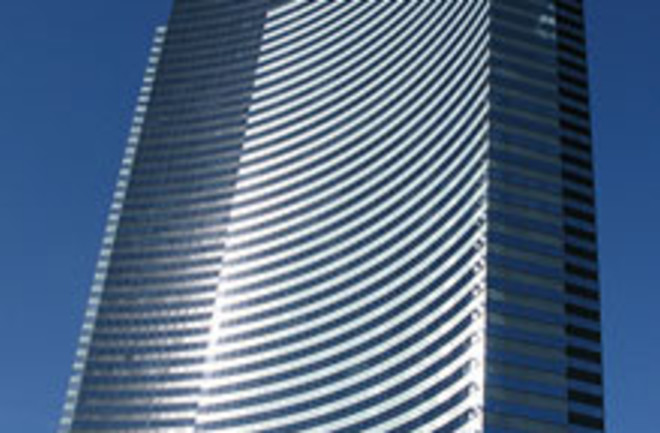 Poolside at Las Vegas's Vdara hotel is a dangerous place to be. That's according to one tourist who claims he almost had his hair singed off by a "death ray"—the term used by some hotel employees—reflected from hotel's shiny facade. The hotel's spokesperson would understandably prefer to use the term "hot spot" or "solar convergence" to describe the spot near the pool where the sunlight reflects off the building's side. Hotel guests say they have seen plastic cups and bags melt from the heat of the ray. The Review-Journal was tipped off to the problem by the story of a poolside lounger named Bill Pintas from Chicago:

[Pintas] became so uncomfortably hot that he leaped up to move. He tried to put on his flip-flop sandals but, inexplicably, they were too hot to touch. So he ran barefoot to the shade. "I was effectively being cooked," Pintas said. "I started running as fast as I could without looking like a lunatic." Then he smelled an odor, and realized it was coming from his head, where a bit of hair had been scorched.

After hearing Pintas' story, the Review-Journal sent reporters undercover to ask the employees and patrons about the phenomenon:

The "hot spot" was visible during one of the visits, but no guests were in its reach. An employee pointed out the zone and said it was "like a magnifying glass that shines down" over a space about 10 feet by 15 feet, which moves as the Earth rotates. At this time of year, the bright reflection is present for about an hour and a half, both before noon and after, according to the young man.

The hotel has previously battled the problem, which they've known about since building the structure, by putting up a special film that blocks about 70 percent of the reflection from the southern-facing part of the building, but it hasn't stopped the pool patrons from complaining. AOL News

talked to hotel spokesperson Gordon Absher about the issue:

"Hotel management is dealing with our corporate designers to find ways to create a little more consistent shade, but pools are tricky," Absher said. "Building a huge shade structure is not the answer because some people want the sun. And the sun is constantly moving. It's quite literally an astronomical challenge."

Astronomical it is, as AOLnews

has discovered that some quotes to fix the problem have run up to millions of dollars. And this isn't the first time a building has attacked people with its reflected rays, the Review-Journal

In Los Angeles, the Disney Concert Hall -- by noted architect Frank Gehry -- had to tone down its reflectivity by sanding some of its curving exterior metal surfaces. Initially, its reflections were raising temperatures in nearby buildings and impairing the vision of passers-by. In 2004, the Los Angeles Times ran a story about the hall, below the headline, "Disney venue reflects badly on downtown."

80beats: NASA’s Next Observatory Will Stare at the Sun; Predict Solar Storms