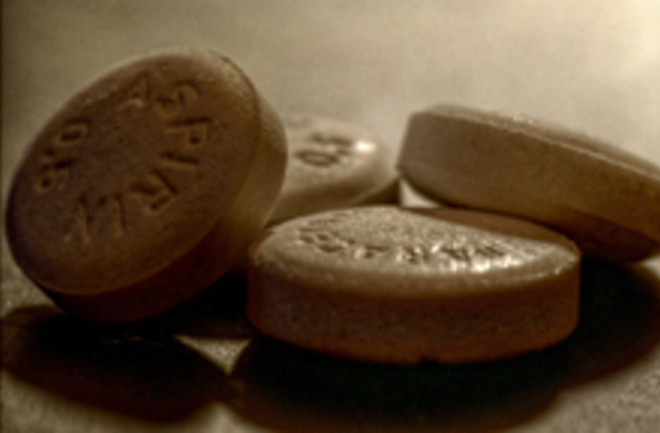 Is plain old aspirin the best medicine to ward off cancer? A new study in The Lancet says that it could definitely help, but researchers urge caution before anybody goes on a low-dose aspirin regimen for this reason. The study, led by Oxford's Peter Rothwell, is actually a review of eight previous studies that compared people on regular doses of low-dose aspirin to those on a placebo. The researchers who initially performed the studies were investigating questions like whether the aspirin regimen was effective in lowering the risk of heart disease. But in doing so, they kept detailed records on the more than 25,000 people who were involved in the studies—including their causes of death.

Aspirin's anti-inflammatory effects, which some research had already connected to benefits against cancer

, would seem to be at play here. And according to Rothwell, those cancer reduction numbers represent a more profound effect than the one aspirin has on heart disease and stroke, which are the main reasons lots of people now take a low-dose aspirin regimen.

"So I think in the fullness of time, preventing cancer will be seen to be the main reason for taking aspirin in healthy individuals," Rothwell says.... Rothwell says the "sensible time" to start taking aspirin "would be before the risk of cancer starts to rise, at about 45." He says prophylactic aspirin is "worth thinking about" for people with a family history of early cancers. [NPR]

But aspirin carries some risk, too, including a small one of stomach bleeding. So some doctors want to be more sure about this effect before they go recommending aspirin to everyone of a certain age. Cancer docs Derek Raghavan and Neal Meropol, for instance, told the Cleveland Plain Dealer

that acting on the Lancet study would be premature, especially because this was a review study.

The biggest drawback to the Lancet paper, both doctors say, is that it pulled data from eight studies that were not designed to look at cancer deaths as a primary outcome. Most of these studies examined the effects of aspirin use on cardiovascular disease. Data about death from cancer was gathered after the fact -- what is called a post-hoc analysis. "If you suddenly go back 20 years later and look at the data, it's tempting to say the result is because of the drug," says Raghavan. [Cleveland Plain Dealer]

Nevertheless, they say, while the aspirin-cancer question requires more direct study, it certainly makes sense. Chronic inflammation is thought to be a risk factor

for some cancers, because inflammation is a signal from the immune system that encourages cells to divide and repair themselves. The long-term increase in cell division also increases the chance that cells will accumulate genetic mistakes and turn cancerous. By reducing chronic inflammation, the thinking goes, aspirin could help stave off cancer. Another study out this week also praises aspirin's cancer-related effects: Researchers say in the Journal of the American Medical Association

that the test for colon cancer was actually more accurate on patients who took a low-dose aspirin regimen than those who didn't.

The study, from German researchers, examined 1,979 patients for the accuracy of fecal occult blood testing. Researchers found the test's sensitivity -- the correct identification of positive results -- was 70.8% for low-dose aspirin users compared with 35.9% for nonusers. Test specificity -- the correct identification of negative results -- was slightly lower among users of low-dose aspirin. It appears that low-dose aspirin use increases the likelihood of bleeding from a colorectal tumor, thus increasing the odds that the test will detect blood. [Los Angeles Times]

Related Content: DISCOVER: Why Scientific Studies Are So Often Wrong: The Streetlight Effect