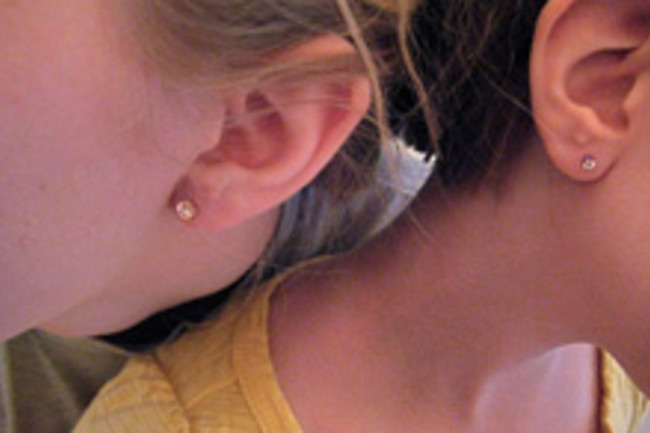 Stem cells may one day provide a cure for deafness, if scientists can build on recent experiments in which a British research team grew the very delicate hair cells of the inner ear from fetal stem cells. These inner ear cells are crucial for hearing but are also irreplaceable and extremely frail. The new study marks the first time they've been grown in a laboratory. The use of stem cells is promising because they can become any kind of cell in the body, and could thus not only be used to replace the lost hair cells, but also any damaged nerve cells along which the signals generated by the hair cells are transmitted to the brain [BBC]. The researchers grew the hair cells from cochlear stem cells they'd isolated from fetuses, cells which are only produced from 9 to 11 weeks into a pregnancy. "That's why deafness is permanent, because we don't have the stem cells to replace damaged cells in the ear" [New Scientist], says Marcelo Rivolta, lead researcher of the study published in the journal Stem Cells. The stem cells were taken from aborted fetuses, with full consent of the women involved. After exposing the cells to various recipes of nutrients and growth factors, the team found one cocktail that changed the stem cells into human auditory hair-like cells. When mature, these grow fine hairs that bend in response to sound energy, generating electrical signals. A second recipe turned the stem cells into auditory neurons, the cells which receive signals from the hair cells and transmit them to the brain, which translates the messages into recognisable sound [New Scientist]. The scientists hope they will eventually be able to use the cells to perform cell transplants in deaf patients to replace the hair cells and neurons that are damaged in a form of deafness known as sensorineural hearing loss [The Telegraph]. Patients who would benefit would most likely include people who have lost hair cells because of noise damage, and some who inherited hearing problems at birth. Related Content: 80beats: Forget the Hearing Aid: Why Not Regrow Inner Ear Cells? 80beats: UK Aims to Create “Unlimited” Supply of Synthetic Blood from Stem Cells 80beats: One Step Closer to Embryo-Free (and Controversy-Free) Stem Cells 80beats: Revealed: The Genetic Root of Seeing Sounds and Tasting Colors