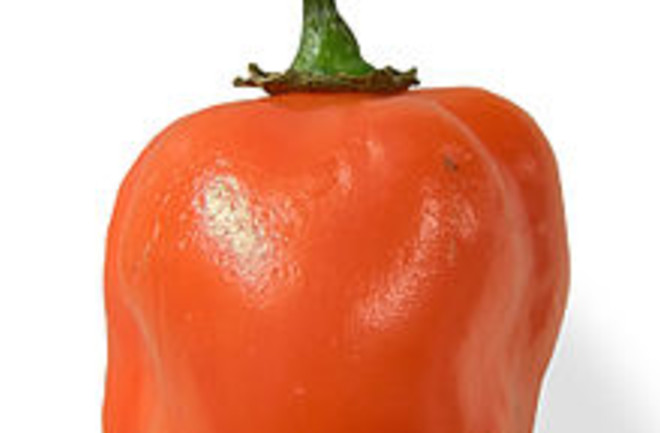 Those who have dined with me in "real life" know that when I eat savory foods, with the occasional exception of salads, I tend to enjoy a great deal of spice. By "great deal," I am someone who can down eight habaneros in 15 minutes while eating potato bread, even if I'm going to regret it later (true incident from June of 2010). Now, I understand for my long term sanity I need to be a bit more moderate, so I usually limit myself to two habaneros per sitting. Additionally, I'm always on the look out for habanero sauces which can combine spice with a richer flavor. Dave's Insanity hits the spice spot, but unfortunately it lacks the fresh and subtle flavor which can be imparted by Thai peppers.

So today I was curious when I saw a habanero sauce from an outfit called The Cultured Kitchen. It was more than $5.00 for a small container, but I decided to get it. I was very disappointed, as it was basically spice flavored carrot juice. Instead of putting it on my salad, as was my intention, I just drank it down like an energy drink so as not to waste it. The Cultured Kitchen seems to market itself as the true "symbiosis of flavor and nutrition." If so, why may I ask do you have to make your habanero sauces so insipid? I have a nice little pitch for the habanero sauces which The Culture Kitchen produces: hot sauce so bland that even a W.A.S.P. will retain their composure and grace!

If you are a small company which produces spicy and delicious hot sauces, feel free to contact me. I'll send you a mailing address, and if I like your stuff I'll be happy to tell everyone that it's great. Of course to be frank I doubt that the market for my level of spice is going to be very large, but there are always suckers out there who want to impress their girlfriends!