Sons of the farmers, the story of Japan 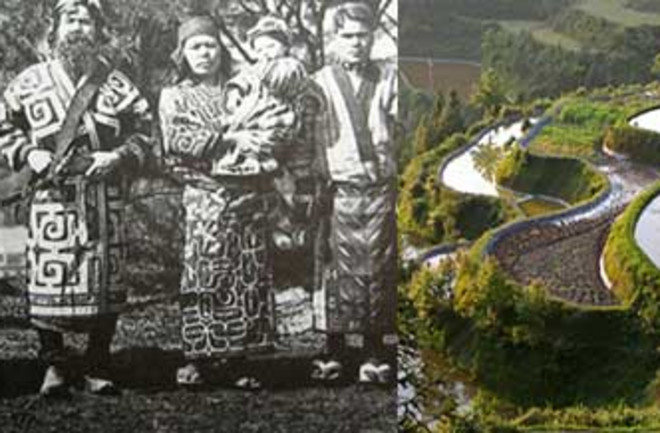 Unlike some islands Japan has a long history of human habitation. More interestingly, under the Jomon culture the Japanese archipelago was home to one of the earliest, if not the earliest, societies which used pottery. The Jomon do not seem to have been intensive agriculturalists. Rather, with a widespread marine littoral they likely maintained extremely high population densities, and at least semi-sedentary habitation patterns, simply through a hunting & gathering mode of production. Pacific Northwest Amerindians are likely a good analogy. They also relied on a dense stock of marine life to maintain population densities of a high level and a sedentary lifestyle. About 2,000 years ago the Yayoi people arrived in Japan. The first Yayoi settlements are in northern Kyushu. These people brought intensive agriculture, in particular rice agriculture, to the Japanese archipelago. The general assumption is that the Yayoi are the precursors of the Japanese who entered into the international system of East Asia during the Tang dynasty in the second half of the first millennium. The Ainu of Hokkaido are presumed to be the descendants of the remaining Jomon people, maintaining a hold in the northern island because of its ecological unsuitability to Japanese agriculture. The question is: what proportion of the ancestry of modern Japanese is Jomon/Ainu, and what proportion is Yayoi? The dynamics here are nicely constrained by the fact that Japan is a relatively isolated island system. The Yayoi seem to have arrived at one discrete moment in history, and rapidly expanded in ~1,000 years to all the main islands of Japan, though the full settlement of Hokkaido commenced in the 19th century. Interestingly, parts of northern Honshu seem to have had a distinct post-Jomon culture down to ~1000 AD. Conveniently the HapMap has both Japanese and Chinese samples, but often there hasn't been too much focus on the differences between these two groups because they're very close in a global context when compared to the Yoruba or Europeans. In more recent analyses of East Asian groups the coverage seems to be better with various Chinese ethnic groups, but relatively few samples from Siberian populations. The latter are critical because the supposition is that these are the groups which would have the most affinities with the Jomon, due to the culture and contacts of the Ainu which evident during the modern period. Dienekes most recent post on K = 15 ancestral components in ADMIXTURE clarifies some issues in this regard. There are multiple Han Chinese and Japanese samples, as well as a wide range of East Asian and Siberian groups. I've reedited and formatted K = 15 a bit, with the aim of focusing on the relationships of the Japanese in particular.

First, it is reasonable that the Denver and Singapore Chinese sample would have a greater proportion of the orange "Southeast Asian" component, Han in the United States are mostly from southern regions of China. Notice that the Japanese don't have this component at all. The Japanese have more of the light gray component, which is modal among the Nganassan of the Arctic coast of Central Siberia. Unlike the Chinese the Japanese also have the blue component which is modal in Eastern Siberia, and also found in many North American groups (many omitted). Finally, it is interesting that the Japanese have the light yellow component in both of the samples Dienekes ran through ADMIXTURE. Going through his spread sheet, here's are some of the populations sorted by this component (number 13):

This is basically Melanesian. Strangely, though at low proportions, the Japanese have much more of this than mainland Chinese, or most East Asians period. They're in the same range as Cambodians, and topped only by maritime Southeast Asians and Indians. I find this interesting because Japanese Y chromosomes are often of haplogroup D, also common among the Ainu. This lineage spans various isolated regions of eastern Eurasia, such as the Andaman Islands. The implication is that D is a relict of a large set of populations which have slowly been absorbed by expansions of other groups. Additionally, some physical anthropologists have observed similarities in the morphology of the remains of the Jomon people and Australian Aborigines. I am inclined to chalk that up to the general robustness of non-farming populations, but it is something to consider. But my primary point about writing this post was to offer some judgment as to the provenance of the modern Japanese. I think that looking at these results, and also keeping in mind other results on East Asian genetics, I'm of the mind that Japan looks to be a classic case where farmers totally marginalized hunter-gatherers.

In other words, the modern Japanese are predominantly descendants of farmers from the Korean peninsula who arrived ~2,000 years ago

. The alternative is that the Jomon were more similar to mainland East Asians in Korea and China than they were to Siberian peoples, which seems unlikely if the Ainu give us any clue as to the culture of the Jomon. This seems more implausible in light of the fact that the Japanese do seem to have some affinities to Siberian people, to a greater extent than the northern Chinese of Beijing (Beijing is a large city, so likely this sample has people who are descendants of 'reverse colonists' from the South as well). If this inference is correct then it is an amazing instance of demographic expansion and replacement. In much of the civilized world intensive farmers replaced extensive farmers in fertile regions in prehistoric times. Or at least during periods when textual evidence is thin on the ground. In contrast, in Japan the process persisted right up until the margins of written history. Additionally, we can peg the arrival of the Yayoi culture very well chronologically because of the discontinuity. Assuming 25 years per generation, in 40 generations the Yayoi had totally extirpated the post-Jomon cultures across all of the Japanese islands except Hokkaido. And, it is notable that the Jomon are generally judged to have been a relatively numerous for hunter-gatherers. Their longevity in Japan as a continuous culture also attests to their success. This narrow specific case may have larger implications for the demographic-genetic patterns we see in the rest of the world.