Something Fishy in the Food Chain

The Pacific broad tapeworm thrives in the guts of the sea lions that frolic in the waves of the Pacific Ocean, has been identified in the preserved poop of Peruvians mummified some five millennia ago, and is now making its way to seafood-loving Europeans through the briny conduits of the world-wide commercial fish trade.

This particularly large parasitic tapeworm, Adenocephalus pacificus, belongs to the genus Diphyllobothrium, an intriguing crew of biological phenomena. These hearty parasites can reach lengths of up to 15 meters and can grow at an an astonishing rate of a centimeter an hour, a feat all the more remarkable for being accomplished while coiled discreetly away in the cozy wet loops of the mammalian small intestines (1). All in all, there are fourteen species of broad tapeworm that infect humans and they are distributed around the world, with each favoring a specific climate and geography (2). 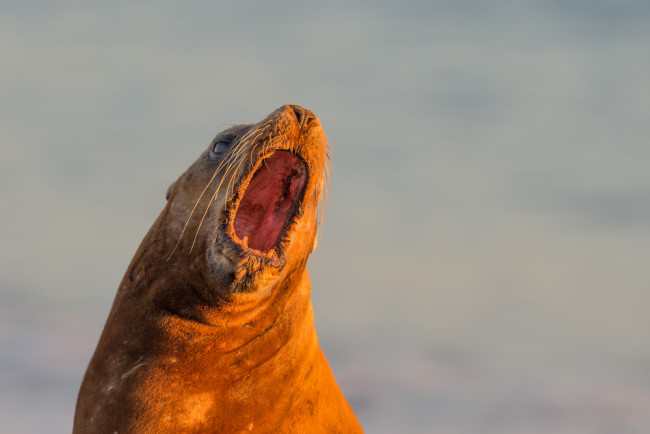 A Patagonian sea lion. These animals are the definitive hosts for the parasitic tapeworm Adenocephalus pacificus. Image: Andrea Izzotti. Click for source. A. pacificus is most at home in South America and in the waters off its western coast. It is one of the least grotesquely-sized of the Diphyllobothrium cousins, ranging in length from only a measly meter to a still-modest four (3). It was first identified in 1931 in a sea lion living near the Juan Fernández Islands off the coast of Chile. Since then, researchers have identified this tapeworm in nine other species of sea lions as well as in a few species of fur seals in the Southern Hemisphere, and though A. pacificus is concentrated in the ocean that gives it its name, it is the most widely-distributed parasitic worm in seals, surfacing in pinniped residents of the South Atlantic and South Indian Oceans as well (4). The high incidence of Pacific broad tapeworm infection in these predatory animals, however, is the result of its prevalence in a previous link in the food chain.The life cycle of A. pacificus remains to be fully elucidated as many of its intermediate hosts are unknown, but its cycle relies on swapping between the viscera of fish and the guts of seals, its definite host. Inside the intestines of seals, a worm will mature and produce its eggs - as many as one million of the little buggers - which are then excreted along with the mammal’s feces. These eggs are then thought to be consumed by small, ubiquitous aquatic crustaceans known as copepods, the worm’s first intermediate host. The parasite makes itself at home and continues to mature until such time as the parasite-and-hapless-copepod duo are devoured by the second intermediate host, a fish. There, the tapeworm digs in its heels and encapsulates in the fish’s visceral organs and tissues, forming pearly white oval cysts only a few millimeters in diameter. We know little about which particular species of fish are most susceptible to infection by A. pacificus, but species of bonito, drum, and mackerel have all been identified with embedded parasitic cysts. The life cycle of the tapeworm comes full circle when a sea lion makes a snack of an unluckily infected fish. Seals, however, are not the only predators that A. pacificus afflicts, and any species that consumes fish infected with these cysts is also at risk. In fact, A. pacificus

has been infecting humans along the Pacific coast of South America for thousands of years and its eggs have been found in human mummies and their fossilized feces from as early as 4000 BCE at Neolithic archaeological sites throughout coastal Peru and northern Chile (5). An examination of coprolites from pre-Incan and Incan settlements shows both fish bones and tapeworm eggs, pointing to human parasite infection via fish consumption. The prevalence of the parasite also appears to have increased substantially when the Incas expanded into the region around 1400 AD, increasing the trade of foods between the coast and regions where fish were previously rarely consumed (6). 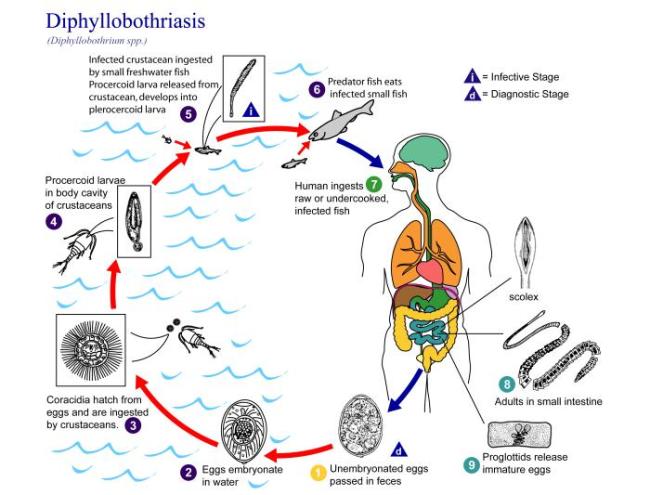 The life cycle of the broad tapeworm parasite. Image: CDC, Alexander J. da Silva, Melanie Moser In case no alarm bells are sounding yet, dear reader, the scope and scale of trade routes has only expanded since the golden days of the Inca Empire. Though A. pacificus

today has a remarkably large global distribution, covering vast stretches of ocean, cases of human infection beyond a sweep of the South American Pacific coast are either rare or simply seldom reported. Of the thousand or so cases that have been reported in the past sixty years, the majority of these infections are recorded in people that live in or visit coastal Peru, Chile, and Ecuador and are associated with the consumption of local dishes of raw fish, including ceviche, tiradito

. The infection typically causes abdominal pain and diarrhea, though heavy infections may cause vitamin B12 deficiency that can in turn result in a certain form of anemia.

Globally, the incidence of tapeworm infection, beyond just that of A. pacificus, is on the rise, especially in urban areas of South Korea, Japan, South America, and certain parts of Europe. This slow rise of a relatively rare form of parasitic infection is a natural result of an increased worldwide demand for seafood as well as the introduction and increasing popularity of raw fish dishes like sushi, sashimi and carpaccio (2).

Although infections with A. pacificus have historically only been reported along the Pacific coast of South America, four cases have recently been reported in Spain, thought to be associated with the commercial import of fresh chilled fish from Chile or Ecuador (7). One patient, a 52-year old woman with no history of travel beyond Spain’s borders, reported regularly eating raw fish that she had purchased from local markets and which had been imported from the Pacific ocean. All patients afflicted reported a similar history of consuming dishes of undercooked fish. 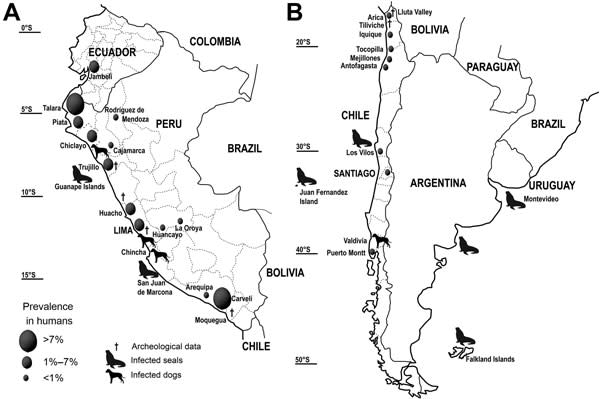 The distribution of the Pacific broad tapeworm Adenocephalus pacificus among humans and wild animals on both the A) northern and B) southern Pacific coast of South America. Image: CDC, R Kuchta et al. Click for source. Spain is currently the third largest importer of fish and seafood in the world, importing more than 200,000 tons of fish from over 100 countries every year (8). Ecuador is Spain’s fourth largest fish importer, with Chile and Peru its sixth and seventh, respectively. When tapeworm-infected fish are merely chilled and not frozen during the importation process, the encysted larvae survive and can remain infective for several days. The risk of tapeworm infection from consumption of these parasite-ridden fish further increases when they are eaten in raw form. These four Spanish cases of a South American tapeworm infection are strongly presumed to come from these few missteps in the importation and consumption of fish caught from the Pacific ocean. Although the numbers of people infected with A. pacificus are small, the implications of the spread of Pacific broad tapeworm from one side of the globe to the other are fascinating. These

parasites, previously relegated to specific regions with diets rich in raw and undercooked fish, are increasing in prevalence and developing new foci of disease among novel populations due to evolving culinary habits and the globalized food market.

ancient parasite that once haunted the bowels of the Incans five-thousand years ago, is now the third most common cause of fish-borne tapeworm infection in humans. From the expansion of the Incan empire along a thin stretch of South America to the ongoing boom in the international fish import and export business, trade routes continue to play an important role in a large tapeworm of seals.

From the Body Horrors Archives