Some Imported Shrimp on Grocery Store Shelves are Contaminated with Antibiotics 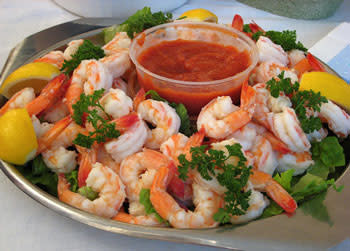 Most of us assume that by the time food arrives at the grocery store, it's been checked for any chemicals that might harm us. That's not necessarily the case: food manufacturers and federal employees test for some known culprits in some foods, but the search isn't exhaustive, especially when it comes to imported items. Recently, scientists working with ABC News checked to see whether imported farmed shrimp bought from grocery stores had any potentially dangerous antibiotic residue, left over from the antibiotic-filled ponds in which they are raised. It turns out, a few of them did

. Out of 30 samples taken from grocery stores around the US, 3 turned up positive on tests for antibiotics that are banned from food for health reasons. Two of the samples, one imported from Thailand and one from India, had levels of carcinogenic antibiotic nitrofuranzone

that were nearly 30 times higher than the amount allowed by the FDA. The other antibiotics the team discovered were enroflaxin, part of a class of compounds that can cause severe reactions in people and promote the growth of drug-resistant bacteria

, an antibiotic that is also a suspected carcinogen. These findings aren't entirely surprising. Last year, the US Government Accountability Office warned

that imported farmed shrimp might be contaminated with dangerous drugs: they are raised in dirty, crowded pond operations that involve heavy use of antibiotics. And since foreign fish farms are not held to US regulatory standards, those antibiotics might include those that US fish farmers aren't allowed to use, like nitrofuranzone, enroflaxin, and chloramphenicol. But the findings are nonetheless a little worrying, as 90% of the shrimp Americans eat comes from such operations, and only 2% of imported shrimp is inspected by the FDA. Clearly, even heavily contaminated shrimp can make it to grocery store shelves, though how frequently this happens is not known. It's worth pointing that this was a very small sample, and no conclusions can be drawn from it other than that, yes, sometimes contaminated shrimp are bought from grocery stores. But it's jarring to be reminded that the health impacts of giving animals antibiotics instead of keeping them clean aren't limited to breeding drug-resistant bacteria. The antibiotics can indeed make their way into us, perhaps bringing health risks you don't normally associate with shrimp cocktail.