Over the past few months more and more articles like this one in the The New York Times are coming out, Two Classes, Divided by ‘I Do’:

Jessica Schairer has so much in common with her boss, Chris Faulkner, that a visitor to the day care center they run might get them confused. They are both friendly white women from modest Midwestern backgrounds who left for college with conventional hopes of marriage, motherhood and career. They both have children in elementary school. They pass their days in similar ways: juggling toddlers, coaching teachers and swapping small secrets that mark them as friends. They even got tattoos together. Though Ms. Faulkner, as the boss, earns more money, the difference is a gap, not a chasm. But a friendship that evokes parity by day becomes a study of inequality at night and a testament to the way family structure deepens class divides. Ms. Faulkner is married and living on two paychecks, while Ms. Schairer is raising her children by herself. That gives the Faulkner family a profound advantage in income and nurturing time, and makes their children statistically more likely to finish college, find good jobs and form stable marriages.

The story is set up to illustrate the importance of contingency. Two women with very similar backgrounds, and presumably aptitudes, make two very different decisions early on in their lives, and that sets their life path via the constraints or options that that choice enables. We've come a long way from the early 1990s when there was a debate, at least at the higher cultural strata, about the necessary value of marriage. But this part jumped out at me:

They stayed with Ms. Schairer’s brother, [the single mother -Razib] visited SeaWorld and Gatorland, and brought back happy memories. But the trip soon began to seem long ago, more a break from their life than an embodiment of it.

I have a dream that in the near future with widespread genotyping that social scientists will look at sets of siblings from a wide range of backgrounds, and compare their realized relatednes and their life outcomes. Remember, though the expected relatedness of siblings is ~0.50, there is variation around this (two of my siblings are related at ~0.41). We can use this information to gain more precisely a sense of the magnitude of genuine random contingency. My own suspicion is that a non-trivial component of the dynamics which are of such grave concern, that is, the suboptimal outcomes of children from single parent households in relation to married households, will be found to be heritable in a genetic sense. On the other hand, if sibling relatedness has no relationship to outcomes of the siblings, then perhaps the genetic component is trivial. So either way, we'll know. One can make an analogy to what I think might be happening via religion. In many societies in the past, and today, religious identification was or is obligatory as a social norm. Variation in religion identification in the society explained very little because there was not much variation. For most of American history the norm was to marry if you were in the top 3/4th of the socioeconomic distribution (with an ideal of a nuclear family, though this was realized by a smaller proportion because of divorce and death). Today that norm is receding up the class ladder. With strong social constraints removed it may be that personal dispositions, with a heritable basis, may be more predictive of marriage than was the case in the past. In other words, some component of the deleterious long-term effects of lack of marriage on children may be due to the correlation between not being married and particular personality types, with the latter being heritable. As I suggest above the basic tools for these sorts of analyses are already there. We don't need to rely on older behavior genetic designs which open themselves up for standard critiques. Rather, just look at the real genetic variation among full-siblings, and assess the outcomes of the full-siblings as a function of that genetic variation. 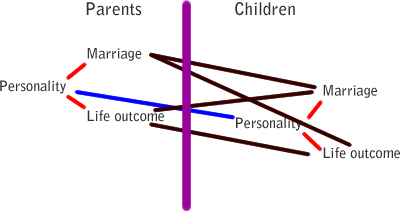 The explicit model of what I'm talking about is straightforward. People often look at parents and children, and look at the correlations between the marriages and life outcomes across the generations. These are real dynamics, in particular life outcomes (e.g., no debt graduating from university vs. lots of debt makes a huge difference in path dependency). But, people often don't recall that personal dispositions impact marriage and life outcomes, and those dispositions are somewhat heritable! This does not mean that traits are genetic & fixed, look up what heritability means. But public policy responses are often neglectful of the heritable component. I would argue that this may make sense insofar as in the recent past the heritable component was less salient than it is today. In concrete terms the sociological version of H. economicus may be the problem, where all individuals can serve as substitutes in the models, even if the same social conditions result in radically different outcomes due to different dispositions (or, perhaps, a release of constraint of social conditions!).