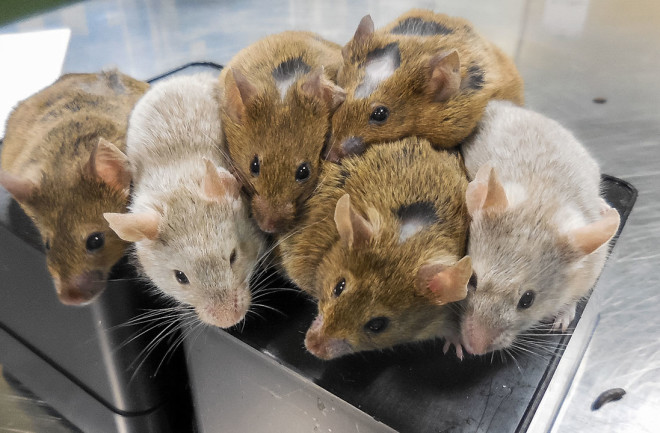 Healthy mice grown using the new technique. (Credit: Hayashi et al./Nature) Japanese researchers announced Monday that they used stem cells to create viable mouse egg cells entirely in the lab. Scientists from the University of Kyoto coaxed skin cells into egg cells, which they then fertilized and implanted into female mice to successfully breed a new generation of mice. The technique had a low success rate, but it's the first time lab-grown egg cells have been used to produce healthy offspring. Previously, members of the same team had created mature egg cells from induced pluripotent stem cells, but this was a more difficult phase of the process: nurturing egg cell precursors to maturity and then successfully fertilizing them. They accomplished this by adding mouse ovary cells to the lab dishes and using them to foster the developing egg cells. Once they had grown into fully-fledged eggs, the researchers fertilized them and implanted them into wombs, where they went on to become baby mice. The technique is not without its shortcomings, however. Chromosome abnormalities were more common in lab-grown eggs than would occur in nature. In addition, of the 300 eggs that were successfully fertilized, only 3 percent went on to become pups, reports Science. That's compared to 62 percent of normal eggs taken from mice and fertilized via in-vitro fertilization.

Eggs created from stem cells in the lab. (Credit: Hayashi et al./Nature) The mice that were born appeared to be fertile and healthy, however. Researchers say that they could also derive embryonic stem cells from the lab-grown eggs, allowing them to complete this cycle over and over in a dish. They published their research Monday in Nature. The breakthrough, which Nature is calling a "tour de force of reproductive biology", comes in the same year that Chinese researchers grew rudimentary, yet functional, mouse sperm cells in a dish. The technique is far from ready to be implemented in humans though. This technique, in the short-term, will aid in egg development research. Creating human eggs from stem cells in the same way presents a range of technical and ethical problems that are yet to be addressed. The presence of chromosomal flaws in some embryos, for example, could lead to potentially fatal complications in embryos, making it too risky to experiment with human cells. Still, there's some hope that as this research progresses it could offer new hope to infertile women.