With the recent huge furor over the utility of kin selection I've been keeping a closer eye on the literature on inclusive fitness. The reason W. D. Hamilton's original papers in The Journal of Theoretical Biology are highly cited is not some conspiracy, rather, they're a powerful framework in which one can understand the evolution of social behavior. They are a logic whose basis is firmly rooted in the world of how inheritance and behavior play out concretely. But because of their formality and spareness inclusiveness fitness has also given rise to a large literature derived from simulations "in silico," that is, evolutionary experiments in the digital domain.

One can elucidate inclusive fitness through Hamilton's Rule, but it is also rather easy to exposit verbally via a "gene's eye view." Imagine for example a dominant mutation in a diploid organism which produces the behavior of altruism toward near kin. Initially the altruist will have offspring whose probability of carrying the dominant mutation is 50%, because there is also the probability that they will carry the ancestral non-altruistic variant. Imagine an altruistic behavior which incurs a small, but not trivial, cost to the individual performing the behavior, and a large gain to the individual who is on the receiving end of the altruism. The logic of favoring near kin is such that in the initial generation the parent which behaves altruistically toward near kin is increasing their own "inclusive fitness" because their offspring share 50% of their genes identical-by-descent (in the case of a diploid sexually reproducing organism).

. So inclusive fitness operates by modulating the parameters of costs and gains to focal individuals as a function of their relatedness, but it is the genes, the "replicators," which persist immortally across the generations. We "vehicles" are just the ocean through which genes sail. But like Darwin's theory of evolution through natural selection the fruit of these logics are in the details. A new paper in The Proceedings of the Royal Society puts the focus on different means by which inclusive fitness may be maximized. In particular, the paper offers up a reason for why what Richard Dawkins termed the "green-beard effect" is not more common. Selective pressures for accurate altruism targeting: evidence from digital evolution for difficult-to-test aspects of inclusive fitness theory:

Using the Avida software platform the researchers ran trials of the evolution of populations of artificial life which varied in fitness, coefficient of relatedness, as well as their phenotypes. In one set of trials the organisms operated through conventional means of kin selection, whereby the heuristic was to favor those to whom an individual was closely related. This will result in a fair amount of "false positives," as everyone knows that near kin can be selfish and "cheat." Remember that in the toy example above 50% of the offspring who will gain from altruism will themselves lack the altruism gene. A second set of organisms look to total genetic similarity. This is the sort of thing which humans could engage in if they had immediate knowledge of the genomic sequences of those around them. Even among near relatives genetic similarity is only correlated with, not perfectly correspondent with, coefficients of relatedness. Some full siblings may share more identity-by-descent than others. This is trivially obvious in the initial illustration, as there will be a great deal of intra-familial variance on the gene which produces altruism. To focus on the dynamics of the specific gene, the authors also looked at a green-beard effect, whereby a there is a correlation between altruism, a gene, and a visible phenotype. In other words, you know altruists by a correlated physical trait. If the correlation between a phenotype and a genotype is close enough you don't need do a typing of their genome because you know the state of their genotype, and so have expectations as to whether they're truly altruists or not. Presumably using the green-beard effect one could side-step the usage of kinship or relatedness as a proxy. In many cases those more distantly related could be more phenotypically similar on the traits of interest than those who are genetically closer. What did they find? Figure 1 shows the outcomes of various sets of trials: 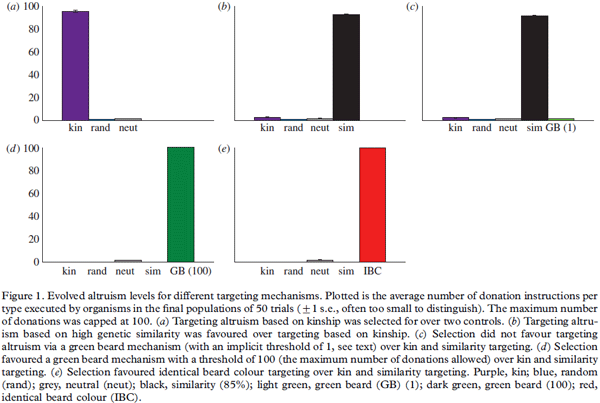 Their expectations were that in regards to the evolution of altruism kin selection should be inferior to genetic similarity which should be inferior to the green-beard effect. The reasoning is straightforward, as you progress across these sequence of dynamics the false positive rate of aiding those without the altruism conferring gene should decrease. That is not what they found, at least not initially. What was happening is that they were focusing on the wrong parameters in framing their expectations. That's why you run the model: human intuition often fails. Green-bearding is very precise as a dichotomous indicator of whether an individual carries a particular gene identical-by-descent, but mutation could produce variation in levels of altruism. What they found was that when green-bearding was dichotomous the levels of altruism tended to converge upon a lower equilibrium as individuals were focused on being just altruistic enough to count as real altruists and so gain advantages from those who were more generous. A concrete example of this would be an "affinity con". An individual is a member of a group, and they leverage the trust which comes from being a member of the group to exploit the group. Baked into the cake of the original model is that altruists who also had a green-beard had to have donated at least once, and that is the target which green-beards converged upon. In contrast the strategy of genetic similarity resulted in greater donations, and because the model had non-zero sum dynamics (altruism increased everyone's fitness greatly, though cheaters could exploit this to "free-ride") the strategy which maximized donations was more successful. The researchers made green-bearding more competitive by simply increasing the donation threshold to match the equilibrium which emerged with the other strategies. So making all things equal the intuition about green-bearding was then vindicated. Instead of setting a specific threshold there was another way that green-bearding could beat the other strategies to maximize inclusive fitness: vary the green-bearding trait and altruism continuously in a correlated fashion. In other words, the greener the beard, the more altruistic. This is a classic way that one could beat the cheaters: develop detection and discernment mechanisms. Why doesn't this matter for the two other more "primitive" techniques? Kin selection and genetic similarity are more robust because they're not fine-tuned, organisms with similar genome content are likely to have similar altruism levels. The genetic relatedness of altruists in green-bearding populations is going to be lower because they're looking for a very specific genotype and its correlation with a phenotype. Green-bearding is more precise, but it's also somewhat more complicated, and as a more precisely engineered solution it may not always be as robust. And that necessity of fine-tuned intelligence in design may be why green-bearding is not more common. The authors note that in theory one could imagine mutations leading to concomitant variations of the magnitude of green-bearding and altruism in the same direction, but in a real evolutionary genetic context with normal parameters of mutation and effective population sizes this may not be plausible. Many people would argue that evolution is littered with kludges because natural selection makes recourse to "quick and dirty" solutions which are simple but effective, and kin selection and genetic similarity are closer to that than green-bearding. In theory selection may lead to a world of green-beards with infinite population sizes and generations, and persistent and consistent selection, but the world may be too protean for this optimal equilibrium to ever arise. So until then, we'll make do with social evolution's duct-tape: "I against my brother; my brother and I against my cousin; I, my brother, and my cousin against the stranger." Citation: