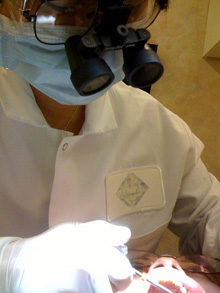 For certain people, there's one sound above all others that strikes fear into their hearts and makes them want to run screaming for sanctuary: the high-pitched whine of a dentist's drill. Presumably dentist-phobes fear the noise because it's associated with the rotten part of a tooth being drilled away, but experts say the noise itself triggers a strong reaction. According to ABC News:

"It's been demonstrated that people's blood pressures rise as soon as they hear the sound, even if they're not sitting in the chair yet," said Dr. Mark Wolff, professor and chair of the Department of Cariology and Comprehensive Care at the New York University College of Dentistry.

So how to help these unfortunate souls? Researchers have come up with an idea: cancel out the shriek of a drill to cancel out the fear. After ten years of development, dental engineers now have a prototype device ready, and they're looking for investors to bring the invention to a dentist office near you. The system starts with a microphone positioned near the drill, which converts its distinctive whine to a digital signal. A digital signal processor then analyzes the sound and produces a sound wave that is its exact opposite. From ABC

"The way that technology works is it listens to the sound, then takes that sound and puts the exact opposite wave around it and if you put two sound waves together with one going in and another going in the opposite direction, there's no sound that comes out," said Wolff.

The fear-canceling sound could be fed into a patient's iPod or other MP3 player, and the patient could continue listening to music at the same time, the inventors say. And since the dentist's voice wouldn't be canceled out, the patient could still follow instructions. In tests, the prototype quelled anxiety more effectively than simple noise-reduction devices.

that the device is the brainchild of Professor Brian Millar of King's Dental Institute:

He was inspired initially by the efforts of car-maker Lotus who were trying to develop a system that removed unpleasant road noise, while still allowing drivers to hear emergency sirens.