Should Patients Be Given Experimental Ebola Drugs? 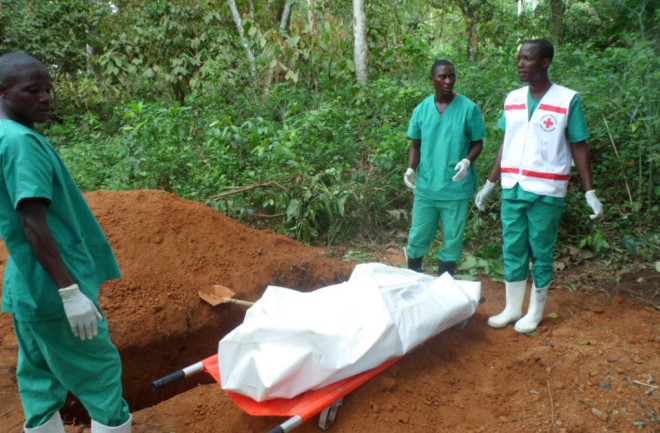 An Ebola victim is buried by the Guinea Red Cross in May 2014. ©EC/ECHO/Jean-Louis Mosser Official response to the Ebola outbreak reached new heights today, as the World Health Organization declared the Ebola outbreak a Public Health Emergency of International Concern – a status that allows them to issue recommendations for travel restrictions. “We’re going to see death tolls in numbers that we can’t imagine now,” Ken Isaacs, a vice president at the NGO Samaritan’s Purse, told a congressional hearing yesterday. The attention on Ebola, and the urgent need for solutions, has focused attention on experimental treatments waiting in the wings – and ignited an ethical debate about whether giving untested drugs to patients is the best course of action.

Based on the most recent official reports, 1,712 people have been infected in the current outbreak. Nearly all of these cases have been in Sierra Leone, Liberia, and Guinea, but another West African country, Nigeria, reports 9 infected people, one of whom died after flying from Liberia. Also, Saudi Arabia reported a likely case after a Saudi man died following a trip to Sierra Leone. And now, the two infected Americans, both stricken with the virus while helping victims in affected areas, have been flown to Atlanta to receive treatment. This will be achieved under special quarantine conditions at Emory University Hospital, where their body fluids will be handled using biohazard level 4 laboratory precautions in which scientists wear outfits resembling spacesuits. It’s got lots of the trappings of similar science fiction plotlines, such as TNT’s The Last Ship, the topic of my previous post. On that series a viral pandemic, whose symptom profile looks eerily similar to that of Ebola, has killed off 80 percent of humanity. The fictional virus has managed this because it’s 100 percent contagious, nearly 100 fatal, and because the fictional scientists and physicians on the series have insufficient knowledge of the virus and no way to treat or even slow the disease. Such extreme situations facilitate nail-biting drama.

UNICEF workers hang posters about Ebola on an island off the coast of Guinea. But none of these things is true of Ebola virus disease. While there is no specific cure, people can and have recovered, plus there are some very promising experimental treatments, including one that may have saved the lives of the two American patients now at Emory. The virus does not aerosolize like measles or influenza, and thus, you cannot get it simply from being in the same room, subway car, or aircraft cabin as an infected person who coughs or sneezes. Instead, it spreads in body fluids like blood and sweat, probably saliva and tears, and possibly semen. The incubation period (time from infection to the onset of symptoms) ranges from 2-21 days, but – unlike measles, influenza, and The Last Ship fictional virus– infected people are not contagious until they are symptomatic. But there is one thing that Ebola virus disease certainly does have in common with the fictional pandemic of The Last Ship: the potential to cause panic on a planetary scale. In the words of Admiral Konstantin Nicolayevitch Ruskov, the series villain, “The fear spread[s] even quicker than the virus itself.” And based on a series of headlines, such as “Ebola is already in the US”, followed by a string of tweets from Donald Trump saying that people who travel to Ebola-endemic areas to help must “suffer the consequences” to prevent “spread inside our borders”, Ebola panic is already mounting. In terms of human behavior, the science fiction writers have scored a bull’s eye.

Estimates on the fatality rate of EBOV are based on the outbreaks occurring since 1976, and fortunately there have been only a handful. In outbreaks before the current one, the fatality rate reached as high as 90 percent. The number of deaths vs. total cases reported in the current outbreak (932/1,712 as of this writing) yields a mortality rate of 54.4 percent. But since we don’t know how many of the infected people will survive, we really can’t have a precise number for the fatality rate. All that we can say for sure is that the death rate is appallingly high, yet there’s a realistic chance of recovery. Furthermore, survival will depend on how early in the course of the disease treatment begins, where the patient is treated, and knowledge and experience of the medical team. Atlanta is home to the CDC, with a concentration of experts and one of a small number of biohazard level 4 lab facilities in the United States, and that’s why the American Ebola patients were taken there.

Liberian laboratory technicians wear personal protective equipment while handling Ebola samples. Currently, the only treatment listed as available for Ebola infection is supportive care, which means giving fluids intravenously, and blood products, such as platelets, when appropriate. In other words, physicians manage the life-threatening effects of disease until the infection has run its course. While supportive care is the only listed treatment, various experimental treatments wait in the wings, having shown promise in laboratory animals. One tactic is to take blood from recovered patients (human or non-human) and use those antibodies in newly infected patients. One such drug is ZMapp, the experimental drug that was given to the two Ebola-infected Americans, produced initially by the immune system of a mouse. The resulting serum was then screened to find its most effective components, called “monoclonal antibodies.” To make these molecules in bulk, researchers would usually insert the corresponding genes into a bacterium. However in an interesting story twist, ZMapp is on the cutting edge of a new approach: using tobacco plants as drug factories, allowing more drug to be produced faster while reducing production costs. But ZMapp is in such an experimental stage that it hasn’t even been tested for safety, let alone for efficacy against Ebola in human trials. After receiving the new drug, both American patients are still alive, suggesting that the treatment may have worked, but further trials are needed.

Another experimental drug, TKM-Ebola, also has promise for the current outbreak. Studies of the drug in monkeys have been promising, and the drug’s manufacturer announced yesterday that the FDA is allowing the company to resume human trials in an expedited approval process – but only on infected patients and not on healthy volunteers. Still, these experimental medicines are in short supply. By the time more drugs are produced in the next few months, the epidemic may have run its course. And it’s an open question whether, if supplies come through, treating infected Africans with experimental drugs is a good idea. Many in the health community endorse the treatment of the two infected Americans with ZMapp. But African patients may be wary of an experimental treatment, and furthermore the drugs could have unknown harms. “As doctors, trying an untested drug on patients is a very difficult choice since our first priority is to do no harm,” NGO Doctors Without Borders said in a statement earlier this week. The World Health Organization plans to convene a panel of medical ethicists early next week to provide guidance on the right way forward in such a tricky, tragic situation.