Dienekes points me to a new paper, Demographic history of Canary Islands male gene-pool: replacement of native lineages by European (PDF). Here are the results:

Autochthonous (E-M81) and prominent (E-M78 and J-M267) Berber Y-chromosome lineages were detected in the indigenous remains, confirming a North West African origin for their ancestors which confirms previous mitochondrial DNA results. However, in contrast with their female lineages, which have survived in the present-day population since the conquest with only a moderate decline, the male indigenous lineages have dropped constantly being substituted by European lineages. Male and female sub-Saharan African genetic inputs were also detected in the Canary population, but their frequencies were higher during the 17th-18th centuries than today.

Remember, mtDNA is following the line of females in one's ancestry, mother to mother to mother to mother, etc. In contrast Y-chromosomal lineages are following the patrilineage. For technical reasons mtDNA phylogenetics has a long history (there's a lot of mtDNA because there are lots of mitochondria in cells), and only in the last decade have Y-chromosomal and autosomal studies caught up to flesh out the full picture. Today with various lines of evidence the differences between the phylogenies of these loci are often informative of historical processes. For example, among African Americans and mestizos looking at Y-chromosomal lineages tends to give one a much higher frequency of European ancestry than total genome content, which is often higher than the proportion adduced from mtDNA studies. Why? We have historical records which offers a plausible model for what happened, European men tended to pair up with indigenous or African women to a far greater extent than the inverse. But this is not the end of the story. Among many mestizo populations ~90% of the mtDNA may be indigenous, and ~90% of the Y-chromosomal lineages are European, while total genome content is about 50/50 in proportion (often with a minority quanta of African ancestry). In contrast, Argentina offers a somewhat different case, the mtDNA is far more Amerindian than both the total genome content or Y-chromosomal lineages. Why? Argentina is a nation of mass immigration, and it seems that repeated waves of male-biased migration resulted in an overwhelming preponderance of European ancestry. But, many of these males took wives from the native-born populace, whose maternal roots generations back may have been indigenous. For example, if somewhat who was 7/8 Swedish and 1/8 Chinese was Chinese through their mother's mother's mother, then the mtDNA would be Chinese. This particular study is interesting because it used ancient DNA to supplement the utilization of North African Berbers as proxies for the indigenous peoples of the Canary Islands. Here's the table which shows admixture estimates as a function of time: 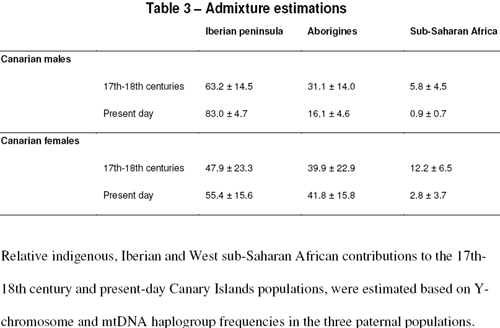 There is sex-biased decline in indigenous ancestry as a function of time. It seems likely that an Argentine dynamic might be at work; Spain has a much larger population than the Canary Islands so exogenous gene flow has a strong possibility of overwhelming the natives. On the other hand male-biased gene flow would result in far less diminution of mtDNA than the total genome, because mtDNA is passed along females, who are far less likely to be immigrants. In other words women are the repositories of the most ancient or deepest lineages in this region. A similar dynamic is at work in South Asia from what I can tell. Obviously the Canary Islands is a totally different situation from the Indian subcontinent, but it might be that there were reason for a long term bias in male migration from the Northwest of the subcontinent which eventually replaced most of the distinctive native genetic material. But because of the male-mediated nature of this gene flow the mtDNA remains as a witness to the earlier genetic history of the region. But it needs to be emphasized that this very speculative, and some research would have us be skeptical of such a model on a priori grounds. These findings have show that females are more likely to be the primary mediators of gene-flow because of the dominance of patrilocality on a world-wide level. In contrast male gene-flow takes the character of discontinuous jumps or drastic total replacements which are less common. Cite:BMC Evolutionary Biology 2009, 9:181 doi:10.1186/1471-2148-9-181