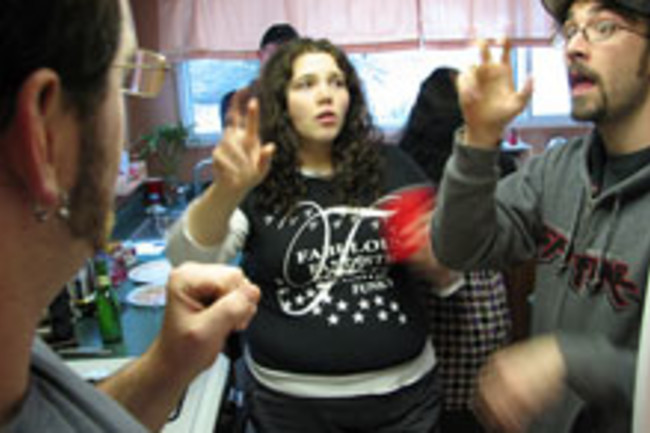 It's easy to see how something like tugging on cow udders or yanking the bones out of chickens all day could wreak havoc on your wrists and cause repetitive strain injuries (RSI). But it turns out sign-language interpreters are actually at a higher risk of ergonomic injuries than people doing many other tougher-sounding jobs—dairy hands and chicken-factory workers included. In a recent experiment, Rochester Institute of Technology researchers had the professional interpreters interpret a 30-minute lecture while wearing nifty devices called electrogoniometers (just saying this word a few times can cause RSI of the jaw) that measured how quickly they flexed and extended their wrists. The interpreters had more complex and repetitive wrist movements than your average udder-milker, chicken-deboner, or computer graphics designer. The scientists, led by engineering professor Mathew Marshall, suggested this is why interpreters suffer from high rates of carpel tunnel syndrome and tendonitis. The results may also explain the profession’s high burnout rate and the nationwide shortage of sign-language interpreters. On top of that, the researchers also found that when the interpreters were under stress, their hand movements became even more injurious. They figured this out by deliberately stressing out some of the interpreters—half were told they were being filmed and that the video would later be shown to a large audience. The stressed interpreters performed more vigorous movements than the non-stressed group (although oddly, only in their non-dominant hands). Translation: Talking with your hands is tough work.