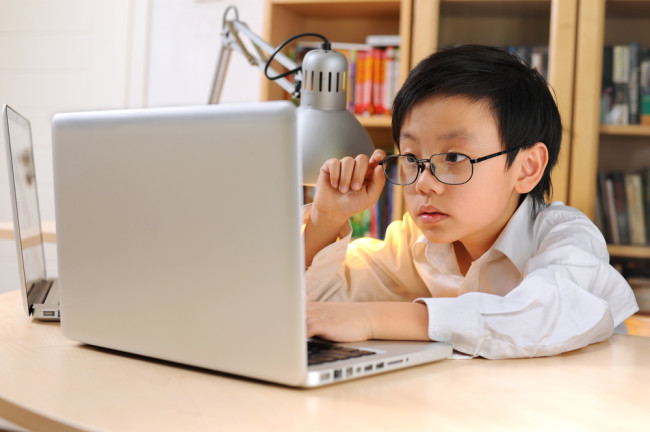 In China, some students are probably finding it a lot more difficult to pay attention: Their classroom has essentially been transformed into a giant cube of windows. The decision to bathe students in sunlight at one particular school in China isn’t some new-age teaching methodology, though. It’s an experimental attempt to preserve children’s’ vision. In the last few decades there's been a dramatic increase in the global rates of myopia, or nearsightedness. In South Korea, for example, 96 percent of 19-year-old males are nearsighted — up from just 18 percent in 1955. By some estimates, one-third of the world’s population will be nearsighted by the end of the decade. So what’s at the center of this global myopia epidemic? Scientists say kids aren’t getting enough sun, and it’s making their worlds blurry as a result. To counter the trend, at least in China, the Yanxi Experimental School is bringing the outdoors inside with a see-through classroom and brighter lighting.

No Longer a Bookworm’s Bane

Myopia was long believed to be the plight of the bookworm. Studious individuals who spent their time buried in books were, it seemed, more susceptible to the condition. The theory seemed to fit, because myopia rates were higher in Asian countries where students spend nearly twice the amount of time doing homework than in the U.S. But recent studies are showing books may not be the culprits. Rather, it’s whether those books are read indoors or outdoors. Studies in animals and humans have shown a link between exposure to bright, natural light and the onset of myopia. In chicks, for example, researchers reduced the incidence of myopia by 60 percent by simply exposing them to high illumination levels. In a study of 2,000 children that’s under review for publication, myopia rates dropped 23 percent by simply giving kids an additional 40 minutes outside each day. Researchers believe the key is dopamine. The sun’s rays are thought to stimulate the release of dopamine, discouraging deformation of the eye. When scientists injected chicks' eyes with a dopamine inhibitor, it canceled out the protective effects of sunlight.

Experts estimate that children need to spend at least three hours a day under light levels that are equivalent to sitting under a shady tree on a summer day, according to Nature. But in Chinese culture, scientists have found it difficult to convince parents to let their kids spend a few idle hours away from the books to enjoy the sunshine. So researchers worked with Yanxi Experimental School in Yangjiang to replace walls with windows in order to flood a classroom with sunlight. Researchers plan to rotate students into the 50-seat classroom for several hours each day starting this fall. The hope is the increased exposure to sunlight will show a dent in myopia rates there, and the approach could be rolled out to other schools. If scientists turn out to be correct, see-through classrooms could catch on. But another solution could be much easier, and 100 percent of children will approve: longer outdoor recess.