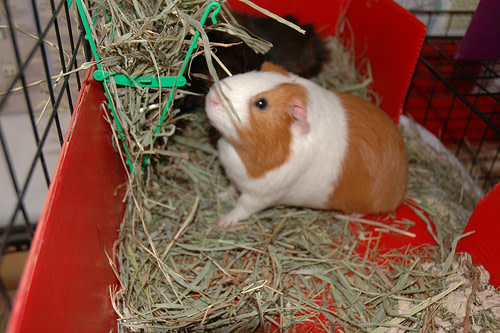 Listen to this: Scientists, experimenting with guinea pigs, have used the electrical potential of the inner ear to power a 1-nanowatt wireless radio transmitter. The cochlea, or inner ear, converts the mechanical energy of sound into electrical signals to the brain. The electrical potential in the ear comes from the difference in concentration of potassium ions in fluid separated by membranes in the inner ear, creating the equivalent of positive and negative poles of a battery. To this cochlear battery, researchers hooked up a wireless radio transmitter, with a power of one nanowatt, one billionth of a watt (for reference, a typical lightbulb is 60 watts), which radioed a measurement of the ear's electrical potential to the researchers, according to their report in Nature Biotechnology

. The inner ear battery was not strong enough to power the radio continuously; instead, they had to let charge build up over time---40 seconds to several minutes---before the radio could send out its signal. They also had to use a radio signal to jumpstart the device in the beginning. Eventually, they hope that the power of the inner ear could fuel cochlear implants

, or other hearing devices, reducing the bulk of these devices by shrinking the batteries needed to run them or extending the life of those batteries so that it would not need to be replaced as often. They may have to make improvements to implants, though, before the inner ear can power its own hearing aid: the potential of a typical hearing aid or cochlear implant battery is about 1.4 volts

; the potential of the inner ear is 70 to 100 millivolts. Generating electricity from biological processes is an appealing idea that many scientists have explored in different systems. Other biological batteries have included harvesting electrical potential from the haemolymph of a snails

, so that the bugs might be able to gather information in places humans cannot crawl. And scientists are also working on a pacemaker that could harness the energy

of the heart itself. In short, a battery of possibilities for harnessing the electrical potential of living things.