Scientists Made a Microbe-Boosting Diet to Help Malnourished Kids Grow 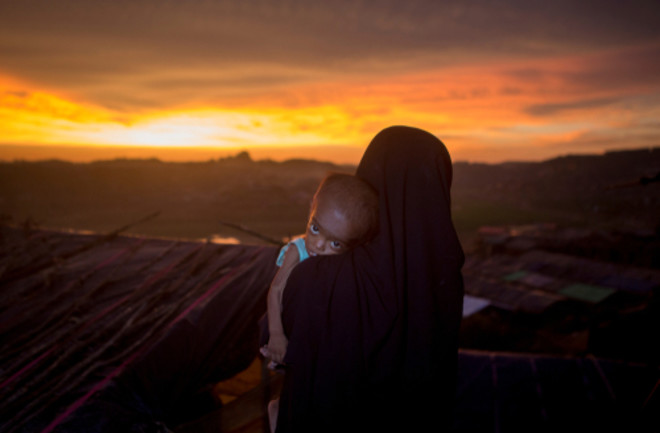 A malnourished child at a camp in Bangladesh. (Credit: Pahari Himu/Shutterstock)

One in four children will never grow to a normal height. In developing countries, the number can be as high as one in three. The problem? Malnutrition.

Now scientists have developed a diet that can boost key colonies of gut bacteria in malnourished kids. The finding is important because past research has shown these bacteria are essential for healthy growth and development. The study paves the way for a new wave of food therapy focused on tackling malnutrition from a gut bacteria perspective.

Lack of proper nutrition accounts for nearly half of all infant deaths before age 5. And while therapeutic diets can help malnourished kids survive, they struggle to counteract the long-lasting consequences — surviving kids fail to develop normally and ultimately experience health complications throughout life.

For a few years now, scientists have suspected that gut bacteria could be behind the lingering effects of malnutrition. They had shown evidence for it but hadn’t come up with a solution yet. Now, an international collaboration appears to have cracked the dietary code to repair the damage caused by childhood starvation on gut bacteria. They suggest the fix could potentially erase the long-lasting effects of malnutrition.

The results of the study were published Thursday in the journal Science.

Back in 2014, researchers identified bacterial strains that change during the first two years of the life of babies. By looking at fecal bacteria, they noticed starving children were missing strains found in healthy kids of the same age — their poop bacteria looked as if it was coming from much younger babies, they reported. The finding implied that kids with severe malnutrition were not developing their microbiome — the bacteria in the gut — properly.

“You can basically think of it as a developmental abnormality affecting a microbial community,” says Jeffrey Gordon, a microbiome scientist at Washington University in St. Louis, Missouri, who led the investigation. “Most people think about human development from the perspective of our human organs or human cells. But there’s another dimension to our development, and that is the assembly of these microbial communities.”

The challenge with studying gut bacteria is that there are way too many species of them and they all interact with each other differently. So it’s nearly impossible to follow them all and measure the effects of therapeutic interventions, say via food ingestion. To circumvent this issue, Gordon used advanced computational models to identify a signature cluster of bacterial strains associated with healthy development that they could just focus on.

This computational undertaking was published in a different article that appeared Thursday in Science. The identified bacterial cluster, which they called “ecogroup,” served as a tool to assess the effect of food therapies on gut microbiota.

Gordon used both mice and piglets to test changes in gut bacteria after eating foods commonly consumed in Dhaka, Bangladesh. There he has a multi-year-long collaboration sponsored by the Bill & Melinda Gates Foundation with the International Centre for Diarrhoeal Disease Research.

The lab results showed chickpeas, banana, and tilapia were most closely tied to an increase in good bacteria. But due to technical difficulties and cost limitations associated with including tilapia in a therapeutic food supplement, the researchers tried out alternative plant-based sources of protein. Ultimately, they chose soy and peanut flours as a replacement for tilapia.

Armed with the identified microbe-enhancing ingredients, Gordon developed therapeutic formulations — a paste that mothers could just spoon-feed to their children — using various combinations. He designed the supplements in such a way that they all had similar levels of proteins, calories, and fat contents.

Meanwhile, other members of the team in Bangladesh enrolled moderately malnourished toddlers — meaning they were ill, but not close to death — in a clinical study to test the food therapy.

The Far-Reaching Effects of Microbes

The study only lasted a month, which is too short to observe actual changes in growth. However, researchers measured over a thousand different blood parameters to build a picture of the kids’ health status. One of the newly developed formulations caused notable changes in the patients’ blood. The diet boosted dozens of proteins involved in bone growth, brain development, immune function and metabolism. No other group experienced these changes, not even those with standard treatment.

At the end of the study, patients taking the promising formulation had their gut microbes turn more like those found in their healthy counterparts — a shift no other diet produced.

Gordon’s study highlights the role microbes play far-beyond the walls of the gut. He is now working on a much larger study to confirm that the effects he observed in blood translate to gains in height and long-lasting health improvement.

“It’s important that we be the best possible custodians that we can be of the healthy development of our infants and children’s gut microbial community,” Gordon says. “There are precious microbial resources [in the gut], and we want to nurture them, so that our children can, you know, be as healthy as possible.”