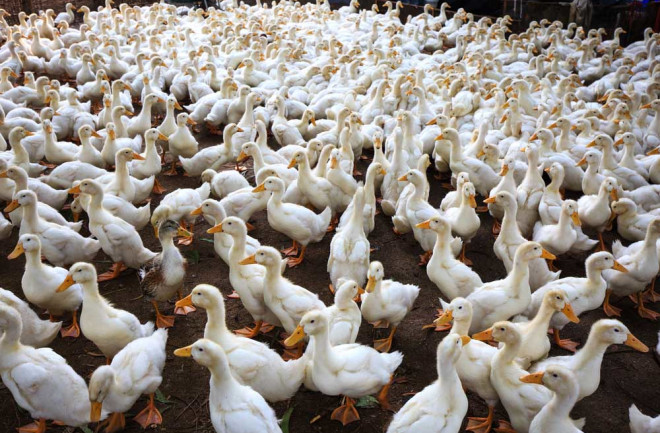 Researchers studying how bird flu vaccinations have worked in poultry find troubling signs in ducks. (Credit: Quang nguyen vinh/shutterstock) When researchers created a vaccine, they largely put an end to the 2013 bird flu pandemics in chickens, capping a worldwide health scare. But now, scientists have found new versions of the viruses in ducks. Researchers recommend vaccinating the nearly 3 billion ducks produced in China each year straightaway.

Back in 2013, authorities detected H7N9, a version of the flu that infects birds, in Chinese poultry markets. Soon after, they found the viruses in chicken farms. The chicken industry suffered major losses. Then the bird flu spread to humans. The World Health Organization has confirmed nearly 1,000 cases of H7N9 in people since 2013. And controlling and eradicating the virus has been a high priority for Chinese authorities. They slaughtered millions of infected chickens and introduced a vaccine in September 2017. Hualan Chen, an animal virologist at the Harbin Veterinary Research Institute in Heilongjiang, China, and colleagues wanted to know how well the vaccine worked. So, the researchers surveyed poultry markets and farms before and after the vaccination program took place. Altogether the team collected close to 54,000 poultry samples across China. They found that the vaccine was indeed effective against H7N9. Before implementation of the vaccines, the researchers detected 306 H7N9 viruses, but only 15 afterward. In a follow-up analysis to the survey, the researchers found the vaccine was able to produce an immune response in chickens that protected them against the virus. All the chickens they tested remained healthy and survived the infection. “Our data show that vaccination of chickens successfully prevented the spread of the H7N9 virus in China,” Chen said in a statement. “The fact that human infection has not been detected since February 2018 indicates that consumers of poultry have also been well-protected from H7N9 infection.”

Although the H7N9 pandemics mostly affected chickens, the scientists discovered some of the viruses in ducks during their survey. They also came across another highly pathogenic virus in the ducks, H7N2. To find out how severely these viruses affected the waterfowl, the researchers infected ducks with the viruses. Of the eight viruses they tested, the H7N2 virus and one of the H7N9 viruses were lethal in ducks. When the team analyzed the viruses’ genetics, they found both had picked up parts of the chicken H7N9 viruses and some unknown duck viruses. They suspect these additions are what made the flu so severe in the ducks. When the researchers tested how well the vaccine protected against the H7N2 virus, they found that all the ducks remained healthy and survived. Ducks that were infected with the virus but did not receive the vaccine died within eight days, the scientists report today in the journal Cell Host & Microbe. “Fortunately, our study indicates that the current vaccine will work well in ducks, so we do not need to develop a new one,” Chen said. “We suggest applying the ... vaccine in ducks immediately.”