When a young athlete arrives in the ER dangerously short of breath, a surgeon must improvise to save his life. 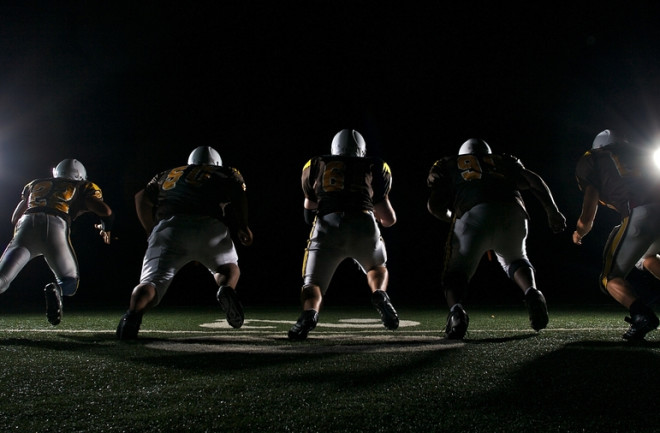 College football has 8,000 injuries a year, but that's not the only reason players visit the ER. | Evan Cate / shutterstock

Early in my career, I was the resident on call one night in the cardiothoracic intensive care unit when an emergency room doctor called and asked me to come down and see a patient. “Young guy,” he said. “He has some sort of an airway problem.”

Those were worrisome words, because airway problems can be immediately life-threatening. I rushed to the patient’s examining room, where two men were supporting a third, younger man. One of the two supporting him was grasping his upper arm so tightly that his own arms were visibly shaking. He looked very scared.

“I’m Steve’s dad, doc.” He looked at the man on the other side of the patient. “And this is Coach Alexander.”

I walked around to the other side of the bed so I could see the patient. Steve was about 20. His forearms, biceps, and triceps, under stress as he leaned forward on the bed, were well developed and defined. His hands were large, with abrasions on his knuckles. He was wearing a white and blue athletic shirt and a matching cap with the logo of a local college. He was sweating, despite the fact that it was cool in the ER. He was extremely short of breath, and his shoulder and upper-back muscles, evidently called into play to supplement the usual ones, were heaving in concert with the movements of his chest.

He replied without looking up at me, gasping between words. “I felt a little…weird…the last couple of days…and then got…a cold or something…really…hard to breathe…now.”

“What happened to your knuckles?” I asked.

He looked up, managing a crooked grin on his red, sweaty face, and replied, “Linebacker.”

At that moment, the emergency room resident walked in. “We have the CT scan,” he said.

We walked over and looked at the scan on a monitor. I was stunned. There was a huge mass, the size and shape of a small cantaloupe, in Steve’s upper chest. It was compressing the area where the trachea splits into two smaller tubes, called the main-stem bronchi. The right main-stem bronchus was obliterated, and the left was only about half its normal diameter.

“This explains why he wants to lean forward,” I said. “It takes pressure off his airway.”

“What do you think it is?” the emergency room resident asked.

“I don’t know,” I said, “but a lymphoma has to be high on the list.” A tumor originating from the white blood cells of the immune system, lymphoma represents almost 15 percent of all cancer diagnoses in young adults. Steve’s symptoms had come on quickly, and of the tumors that can occur in this area of the chest, lymphoma is one of the fastest.

We took Steve to the operating room to biopsy the mass. The staff surgeon asked me to have the anesthesiologist insert the breathing tube into the patient’s airway while he was awake and sitting upright. Although patients are usually sedated and paralyzed during this procedure, the surgeon worried that if Steve were relaxed and lying down, the tumor could press on the airway so firmly that the anesthesiologist would be unable to pass the breathing tube at all—what we term “losing the airway.”

As I walked into the OR, the anesthesiologist was lowering Steve from a sitting to a lying position, counter to the surgeon’s instructions.

“We think you should intubate him awake and upright,” I said hurriedly, “due to the tumor’s location.”

“I don’t think that is necessary,” he replied, and immediately injected Steve with the intravenous anesthetic.

Over the next several seconds, I watched in horror as the anesthesiologist tried five times to pass the tube, only to have it stop halfway down: The tumor had slammed the trachea shut.

“Dammit!” the anesthesiologist said, “it won’t go!” His face was red, and his hands trembled from anxiety.

I ran over to the bedside and barked at the circulating nurse: “Get the rigid bronchoscope, stat!”

Unlike the thinner and flexible breathing tube, the rigid bronchoscope is not much more than a metal tube about half an inch in diameter with a lighted fiber optic shaft. We occasionally use this device to remove foreign bodies or to biopsy airway tumors. It can also be used to ventilate a patient when the more flexible breathing tube cannot be inserted.

As the nurse ran out of the room, I looked over at Steve’s oxygen saturation monitor, which displays the amount of oxygen being carried by the red blood cells to the tissues of the body. The monitor both displays a number and beeps with each heartbeat; the beeping tone gets lower as the numbers go down.

Over the next several seconds, I watched in horror as the anesthesiologist tried five times to pass the tube, only to have it stop halfway down.

A normal blood saturation level is between 95 and 100 percent. Anything lower than 80 percent for more than a few minutes can damage the brain and other organs and possibly result in death. With no oxygen reaching Steve’s lungs, I listened and watched helplessly as the numbers got smaller and the beeping tone went lower: 90… 70… 52… Steve’s heartbeat began to slow and became irregular.

“We’re losing him!” I yelled. I knew that CPR would be futile—it pushes oxygen through the airway, and the airway was closed.

The nurse wheeled a cart into the room. I grabbed a rigid bronchoscope and attached the light cord as the anesthesiologist moved out of the way. I placed the scope in Steve’s mouth, identified the larynx, and shoved the metal scope past the vocal cords. I felt a bump as it slid past the tumor and down the left main-stem bronchus. I heaved a sigh of relief. We could deliver enough oxygen to one side to sustain him. Now I just needed tubing to hook the bronchoscope to the ventilator.

“Hand me the ventilator tubing,” I told the anesthesiologist.

“Thank God!” he said, handing me the tubing.

I froze. The tubing, retrieved in haste by the nurse, was the wrong size and lacked the connective hardware the device required. “Get me a connector!” I yelled. The nurse ran out of the room again.

All of the alarms on the machine were now going off. Steve’s oxygen saturation was 25 percent, and his heartbeat was erratic.

We were out of time and had to do something immediately or Steve was going to suffocate right in front of us. I suddenly flashed back to the way I had been taught as a medical student to do mouth-to-mouth resuscitation, and it triggered an idea. Desperate, I began to blow into the tube—something that isn’t part of any standard medical procedure.

“What the hell are you doing?” the anesthesiologist shouted. But within seconds the saturation was up to 50, then 65, then the low 80s. Steve’s heartbeat normalized.

The air we exhale has lower oxygen content than what we normally breathe in, but it is close, and much better than nothing. I was acting like a human ventilator, delivering enough oxygen to sustain Steve’s life.

As the operating staff looked on, dumbfounded, I continued breathing through the tube. Eventually the nurse found a fitting, and we hooked Steve to a proper ventilator, from which 100 percent oxygen could be delivered. I was finally able to make an incision above his breastbone and biopsy the tumor. We sent a piece of the mass to the pathology lab down the hall. A few minutes later the pathologist called. It was probable lymphoma.

We were out of time and had to do something immediately or Steve was going to suffocate right in front of us.

The best treatment for lymphoma in the airway is chemotherapy, not surgery, so we called in an oncologist who was able to administer chemotherapy in the operating room. We then transferred Steve to the ICU with the rigid scope still in his airway. The plan was to try to shrink the tumor with the tube in place, protecting his airway from collapsing again.

The pathologic examination showed that Steve’s cancer was related to acute lymphoblastic leukemia, which can spread very rapidly. But the prognosis in young adults is much better than in older age groups. Some 75 percent of cases in young patients are curable.

Steve underwent more chemotherapy while still on the ventilator. Luckily, despite the size and dangerous location of his tumor, Steve was a fighter and was soon breathing on his own. The tumor shrank, and he got more good news when we found the cancer had not spread to his bone marrow. On his tenth day in the hospital, he was transferred out of intensive care.

A week later, as I was walking across the hospital lobby, I encountered a gratifying sight: two men supporting a third as they walked toward the front door. Steve’s father and coach were taking him home.

More From Discover
Health
A Blood Test That Screens For Multiple Cancers At Once Promises To Boost Early Detection
Health
Feeling Sleepy After a Thanksgiving Meal? It Might Not Be the Turkey
Health
There's a New Group of Blood Types — Here's Why it’s Important
Mind
3 Unique Ways We Can Remember The Past
The Sciences
5 Amazing Things About The Human Body
Health
Deadly Beauty: The Poisons Used In Makeup Through The Ages
Recommendations From Our Store
My Science ShopDiscover STEM Kits
My Science ShopDiscover 2022 Calendar
My Science ShopStrange Science
My Science ShopElements Flashcards
Shop Now
Stay Curious
Join
Our List