Revisiting the architecture of evolution 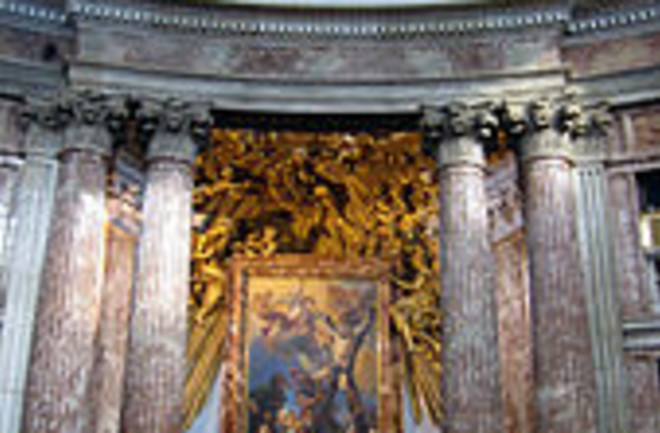 Baroque? An old argument going back to the origins of theoretical population genetics has to do with the nature of the genetic effects which control traits and are subject to change in allele frequency due to adaptation. Often these are bracketed as part of the controversies between R. A. Fisher and Sewall Wright (see Sewall Wright and Evolutionary Biology). In short, Fisher contended that most evolution through adaptation was driven by selection operating upon additive genetic variation. That is, variation due to alleles across the genome, each having independent and additive effects on the trait. One might think of these as linear effects. In contrast Wright's views were more complex or confused, depending upon your perspective on the sum totality of his theories. In the domain of genetic architecture he presented a model where gene-gene interactions, epistasis, played an important role in the evolutionary trajectory of populations, which traversed 'adaptive landscapes' in a contingent fashion. The point is not to revisit old and somewhat stale controversies. It is to suggest that filaments of these nearly century old debates persist down to the present in a vividly relevant manner. Evolutionary biology is a progressive science, but the arc of the initial narrative initiated by the fusion of biometrics, Darwinism, and Mendelism, has not concluded. Last year a group suggested that much of the "missing heritability" may actually be found in the interaction term across genes. In many quantitative genetic treatments this component may be collapsed into the "environmental" component, as opposed to the "narrow-sense" heritability, which is defined by additive genetic variance. If this epistatic component can be thought to be more complex and non-linear it stands to reason that biologists would focus on the additive component of variance first. But, there is the possibility that additive genetic variation is somewhat like looking under the lamp post, because that is where the light is. A new paper in PLoS Genetics takes the argument even further, An Evolutionary Perspective on Epistasis and the Missing Heritability. Let me jump to the first paragraph of the discussion:

The architecture of genetic variation must be understood if we are to make progress in fields such as disease risk prediction, personalised medicine, and animal and crop breeding. This study sought to examine the potential for epistasis to maintain genetic variation under selection, and thus to inform GWA strategies based on these results.

Though the paper seemed to shift between a broad evolutionary perspective and salient within biomedically focused GWAS studies, I found the treatment of the former rather elliptical. Using a range of gene-gene interaction models they concluded that deleterious genetic variation could be maintained to a far greater extent than with an additive paradigm. Ergo, the extant genetic variation across many traits which may seem to violate the fundamentals of evolutionary process (fitness maximization and erasure of genetic variation). This makes some sense, in that additive genetic variation should be effective in purging deleterious variants, and fixing advantageous ones. In contrast, interaction effects are such that benefits and demerits may be more conditional, at least in regards to their magnitude (from what I recall this was one reason for Fisher's dismissal of their important to the overall evolutionary arc of a population; see R.A. Fisher: The Life of a Scientist). One technical aspect that concerns me about the arguments outlined in the above paper is the emphasis on overdominance and heterozygote advantage. Though they are aware of the problem of segregation load multiplied across loci, where homozygotes are generated in a context where heterozygotes are most fit, the authors still emphasize scenarios in their two-locus models where this is critical. Intuitively I have difficultly believing that this can be any major part of explaining "missing heritability." But the broader issue in regards to epistasis is well taken, and it is a reality that epistatic and additive variance can emerge from the same loci conditional upon the overall genetic architecture. On the evolutionary canvas the two may be interchangeable as a function of time. Their treatment of problems with GWAS was more straightforward. This is the method whereby associations are found between traits/diseases and particular genetic variants by looking at differences between discrete populations with differences in traits/diseases of interest. It seems that their models illustrate that the power to detect epistatic variance, and its impact on trait value, is masked by the fact that linkage disequilibrium between markers and causal variants must be very high for it to be detected. In contrast additive effects are less sensitive to decay in linkage disequilibrium, which measures the association of alleles across genes, so that one marker may serve as a signal for the presence of another variant down or up the genome. Part of the answer is probably here. But how much? Though no "letter" to Nature I felt that this paper could be fleshed out somewhat, as some of the inferences seem to be rather underdeveloped. They have demonstrated complexity and lack of generality. But what now? I suppose we'll see. Citation: Hemani G, Knott S, Haley C (2013) An Evolutionary Perspective on Epistasis and the Missing Heritability. PLoS Genet 9(2): e1003295. doi:10.1371/journal.pgen.1003295 Addendum: For those curious about epistasis and evolution, see if your college library has Epistasis and the Evolutionary Process.