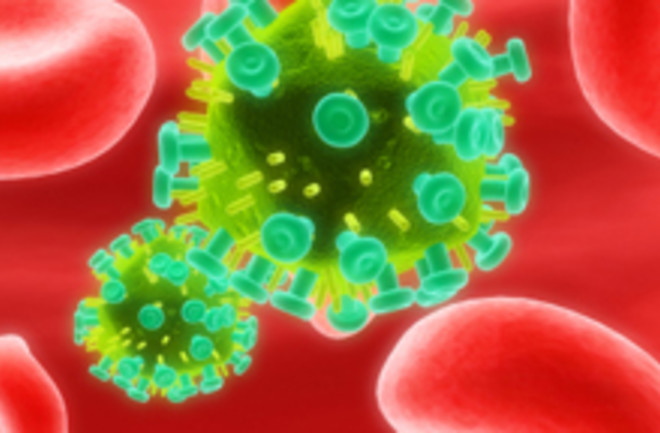 For a study this week in the journal Nature Medicine, Kathleen Collins and her team have uncovered another of HIV's dirty tricks: the virus can hide out in bone marrow cells and lie in wait for the right time to strike.

In recent years, drugs have reduced AIDS deaths sharply, but patients need to keep taking the medicines for life or the infection comes back, she said. That's an indication that while the drugs battle the active virus, some of the disease remains hidden away to flare up once the therapy is stopped [AP]

. One place the researchers already knew HIV could hide was inside resting T cells. However, Collins says, she thought T cells alone didn't offer a complete picture of the virus' ability to play hide-and-seek. So she and her team took hematopoietic progenitor cells (HPCs) from bone marrow cells—so called because they eventually turn into blood cells—and exposed them to HIV. The infection killed some cells right away. But when the team forced the others to differentiate, becoming blood cells, they say, they saw a dramatic increase in viral activity triggered by the differentiation.

In short, HPCs represented another HIV reservoir. "To my knowledge, we are the first to find another real reservoir beyond the resting T cell," Collins said [The Scientist]

. When the scientists then studied HIV patients who'd had undetectable viral loads for six months or more, they found HIV infecting the bone marrow of about 40 percent. The study is an important step for scientists trying to track how HIV behaves over an infected person's lifetime, and why it's able to come back with a vengeance even after a long latent period.

However, "maybe we could find ways of targeting only the latently infected bone marrow cells," she added [BusinessWeek]

. Related Content: 80beats: S. African HIV Plan: Universal Testing & Treatment Could End the Epidemic 80beats: If Everyone Got An Annual AIDS Test, Could We Beat Back the Epidemic? 80beats: HIV/AIDS Patients in Papua May Be Tracked with Microchips 80beats: Beware of Hype: AIDS “Cure” is Good Science, But Won’t Halt the Epidemic DISCOVER: Hope For HIV VaccineImage: iStockphoto