Researchers Switch Off Gene in Mice to Switch on Endurance 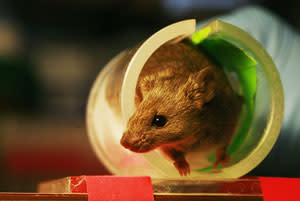 What’s the News: By knocking out a single gene, scientists at the University of Pennsylvania have significantly increased the physical endurance of lab mice

, as explained in their recent paper in the Journal of Clinical Investigation. The researchers also found that certain variants of the same gene may be linked to greater endurance in humans. How the Heck:

Not So Fast: While it seems clear that knocking out the IL-15Rα can improve endurance, the research doesn’t explain why the engineered mice voluntarily ran more than the normal mice. There may be an undiscovered psychological component at work, Evans told Science NOW

. The Future Holds: The researchers suggest that scientists could someday develop drugs to block IL-15Rα to enhance endurance. Specifically, this would be useful for diabetics and the elderly, whose health is often negatively impacted by fatigue. (via Science NOW