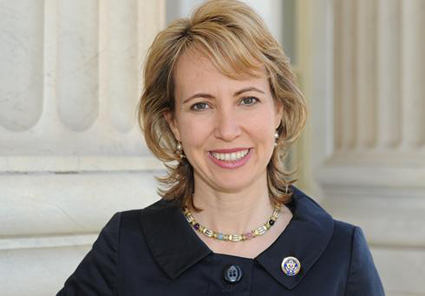 Contrary to the erroneous early reports that U.S. Representative Gabrielle Giffords was killed during the attack on her campaign event Saturday, the Congresswoman survived the attempt on her life. She's considered lucky to be alive--gunman Jared Loughner shot her in the head at close range. Now, as she enters the long, unpredictable journey back from serious brain injury, there are at least good signs.

The optimism expressed Sunday was based on Ms. Giffords’s ability to communicate by responding nonverbally to the doctors’ simple commands, like squeezing a hand, wiggling toes and holding up two fingers. The tests are part of a standard neurological examination after head injuries. In Ms. Giffords’s case, the doctors were encouraged because the simple tests showed that she could hear and respond appropriately, indicating that key brain circuits were working. [The New York Times]

This morning, the news remained positive

—reportedly the swelling in Giffords' brain is not getting any worse. That swelling is the real danger in the immediate aftermath of injury if the person survives the initial shock, as Giffords did. Fortunately, she found herself in the care of Dr. Peter Rhee, who was a Navy doctor for 24 years

, tending to Marines and soldiers and learning emergency response to brain injury. Dr. Michael Lemole, chief of neurosurgery at the University Medical Center in Tucson, explains that a large piece of Giffords' skull has been removed to prevent the swollen brain from pressing against the rigid skull, which would cause further damage.

"The key is making a wide opening in the skull so that the brain can relax into it. Decompression has allowed us to save soldiers with horrible blast injuries," said Lemole, who removed a wedge from the left side of Giffords' skull, above the area pierced by a bullet. After the swelling subsides, he said, the bone will be put back into place, closing the gap in her skull. [USA Today]

The attacker's bullet pierced the left side of Giffords' brain

, entering the back of her skull and exiting the front. It most likely passed through brain regions that affect speaking and speech recognition, though reportedly the Congresswoman's family has asked the doctors not to be too specific about which parts of the brain are particularly affected. However, the fact that she at least can respond is a positive sign, according to neurosurgeon Eugene Flamm of Montefiore Medical Center in the Bronx.

“It sounds simple to raise fingers and squeeze hands,” he said, “but the ability to do it is a very good sign in a brain-injured patient because it shows that the dominant hemisphere was not knocked out.” [The New York Times]

Furthermore, the Tucson doctors say the bullet did not pass between the left and right hemispheres of her brain--those injuries are usually more disruptive. Even if we did know all the specifics about Giffords' brain injury, though, predicting the course of her recovery would be mere speculation.

While most people who are shot in the head or suffer other severe head trauma do not survive, there have been remarkable cases of victims who have come back--such as Jim Brady, President Ronald Reagan's press secretary, who survived a gunshot wound to the head during the 1981 assassination attempt. Brady lost the use of his left arm and leg, but largely recovered otherwise. [Washington Post]

Reportedly, Giffords' injury is less severe than Brady's was, though factors like scarring on the brain could also leave her vulnerable to seizures. But Dr. Rhee says Giffords has been lucky so far, and we can only hope that this continues. There's no guarantee that Giffords will make a significant recovery, but she absolutely has the chance to do so.

“This is about as good as it is going to get,” Rhee said yesterday in discussing Giffords’s wound. “When you get shot in the head and the bullet goes through your brain, the chance of you living is very small and the chances of you waking up and actually following commands is even much smaller than that. Hopefully it will stay that way.” [Bloomberg]

DISCOVER: The Brain: What Happens to a Linebacker’s Neurons?

DISCOVER: Reviews: One Man’s Quest to Heal the Brain