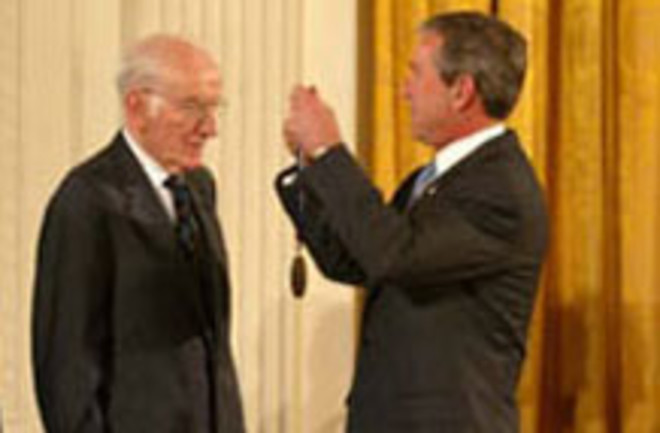 Victor McKusick, the visionary researcher who is often called the father of medical genetics, died on Tuesday at the age of 86, from complications from cancer. “Today we have lost a giant,” said Johns Hopkins Medicine dean… Edward D. Miller. “He spent virtually all of his incredible career at Hopkins, but his influence and legacy reach around the world” [AP].

McKusick began his career as a cardiologist, but in the early 1950s he shifted focus. While examining a patient with Peutz-Jeghers syndrome, a rare inherited disease that puts patients at high risk of developing intestinal cancer and causes odd skin pigmentation, Dr. McKusick became curious about how a single genetic mutation led to problems in various organs…. In the late 1950s, just a few years after DNA was discovered, he decided to devote his career to medical genetics [Baltimore Sun].

As sophisticated genetic analyses were not possible when McKusick embarked on his new path, he gathered evidence by conducting surveys within insular communities like the Amish of Pennsylvania, where small gene pools had increased the incidence of some rare, inherited diseases. Some of McKusick’s colleagues viewed his research as the medical equivalent of stamp collecting. A few wondered if it was even science. But McKusick perceived that the future of medicine — and immense insight into the molecular gears and switches that are the science of life — lay in the direction he was heading. If getting there required going house to house, examining babies, asking about grandparents… he was more than happy to do it [The Washington Post].

Based on such studies, McKusick began building the first database of gene function, and in 1966 he published the first edition of his now-classic book “Mendelian Inheritance in Man,” which included 1,800 genes. By the time the 12th and last printed version of the book appeared in 1998, it had grown to three volumes and about 12,000 genes [Los Angeles Times]. McKusick was also one of the first to suggest sequencing the entire human genome in 1969, when many of his colleagues dismissed the idea as impossibly difficult. But McKusick didn’t give up on the proposal, and was instrumental in starting the Human Genome Project, which completed the task in 2001.