Rat Pants and Goatman, the 2016 Ig Nobels Were Wacky As Ever 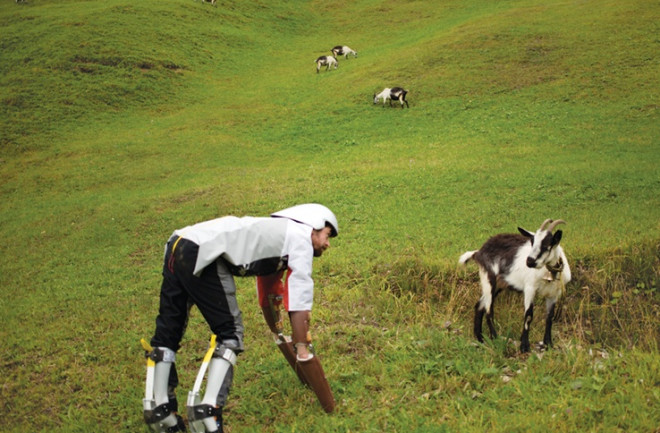 (Credit: Tim Bowditch) The 2016 Ig Nobel prizes were awarded last night, and the honorees included, as always, the best, brightest and wackiest minds in science. The Ig Nobel prize tradition began in 1991 as a way to honor research that "could not, or should not, be reproduced," and has since grown into both a fond celebration of bizarre science and an opportunity for esteemed researchers to sing operas about coffee. Actual Nobel Prize winners serve as the presenters during the ceremony, which takes place at Harvard University's Sanders Theater.

Nobel laureates Wolfgang Ketterle (left), Orhan Pamuk (center), and Paul Krugman (right) put bras on their face during the 2009 Ig Nobel ceremony courtesy of designer Dr. Elena Bodnar. (Credit: Alexey Eliseev) In keeping with the general sense of levity, the ceremony is punctuated by a number of time-honored traditions, including Miss Sweetie-Poo, a young girl who ensures that presenters keep to their strict 60-second time limit by yelling "Please stop, I'm bored!" until they leave the stage and the regular rain of paper airplanes that inundates the auditorium. Not all of the research is frivolous though — one paper examining the effects of researchers' beards on contamination in lab experiments went on to form the basis for lab guidelines the world over, and another showing that mosquitos like limburger cheese would go on to inform mosquito-trapping techniques in Africa. As the Ig Nobel committee puts it, the best of their winners conduct research that combines serious inquiry with a respect for the absurd, with the goal of making "people laugh, and then think." The 2016 honorees studied fascinating subjects like rats in pants, the personalities of rocks and the eternal question of whether things look different when you view them between your legs.

Egyptian researcher Ahmed Shafik took home an Ig Nobel for his research into the effects of wearing various kinds of pants on male reproductive success. He first tested his theory on rats, yielding one of the most adorable illustrations ever seen in a scientific paper, before moving to human subjects. The consensus? Don't wear polyester.

A trio of researchers from New Zealand won the Ig Nobel for Economics based on a paper assessing the personalities of rocks. Study participants were shown pictures of various rocks and asked to infer what kind of personality the rocks had, based on appearance alone. Surprisingly, people assigned very different kinds of personalities to different rocks, revealing that the human ability to personify inanimate objects apparently knows no bounds.

Swedish researchers took the crown for physics after publishing a paper reaffirming the age-old adage: "Even less than a fly likes a white horse"* by showing exactly why white-haired horses don't seem to have trouble with horseflies. As a bonus, they also illustrated how black tombstones conspire to kill dragonflies. *Note: This has never been said before.

The dirt only appears when the EPA isn't looking. (credit: villorejo/Shutterstock)

In a pleasant twist, the winners of the chemistry prize weren't even scientists. Volkswagen got the chemistry prize this year for their years-long effort to develop an efficient and barely detectable method for significantly lowering the emissions of diesel automobiles, with the caveat that it only works when regulatory agencies are watching.

The winners of the medicine Ig Nobel offer relief to anyone who's ever suffered from an itch they just can't scratch. Their research actually casts a lot of doubt on the basic reality of itches as a whole by showing that we can relieve an itch on one side of our body by looking in a mirror and scratching in the same place on the other side. Itches: All in our heads?

Two people split the biology prize this year — in an astonishing coincidence, two unrelated men both decided to become animals this year and write a book about it. One is Charles Foster, who lived variously as a fox, badger and deer, in addition to numerous other animals, in pursuit of some kind of perspective on his own life as a human being. The other is Tom Thwaites, who took the quality over quantity route and attempted to become a goat, even going so far as to build a customized suit that brought him closer to his grass-munching idols.

This researcher picked the most reliable subjects he could to research how and why we lie: liars. His results, which he swears are all true, indicate that we lie the most as adolescents and the least when we are children and seniors.

The most important Ig Nobel prize went to a team of Canadian researchers that demonstrated some people are more inclined to read meaning into statements that could very well be labeled BS. They had participants read a series of seemingly profound statements like "Hidden meaning transforms unparalleled abstract beauty," that were actually just random collections of words from Deepak Chopra's Twitter organized into sentences. Participants were then asked to rate the statements based on how insightful they seemed. The study also wins the prize for most utterances of "bullshit" in a single paper.

"The Fly Trap," by Swedish author and amateur entomologist Fredrik Sjöberg is a lovingly detailed examination of the authors unusual habit of collecting flies. He doesn't attempt to rationalize his peculiar passion, instead saving his words for a thorough synopsis of the particulars of fly catching, filled with digressions that extol the virtues of appreciating the world around us simply as it is.

A brand new category for the Ig Nobel, the Perception Prize, went to two researchers from Japan who proved what every kid knows to be true: Things look different when you look at them with your head between your legs. Unfortunately, no images from the study were available.

More From Discover
Health
What is Epilepsy and What Should We Know About it?
Health
What is Long COVID and What are the Symptoms?
Health
A Blood Test That Screens For Multiple Cancers At Once Promises To Boost Early Detection
Health
Feeling Sleepy After a Thanksgiving Meal? It Might Not Be the Turkey
Health
The Surprising History of the Bidet Started with the Wealthy and Brothels
Health
How These Top 10 Favorite Thanksgiving Dishes Impact Your Health
Recommendations From Our Store
My Science ShopDiscover STEM Kits
My Science ShopDiscover 2022 Calendar
My Science ShopStrange Science
My Science ShopElements Flashcards
Shop Now
Stay Curious
Join
Our List