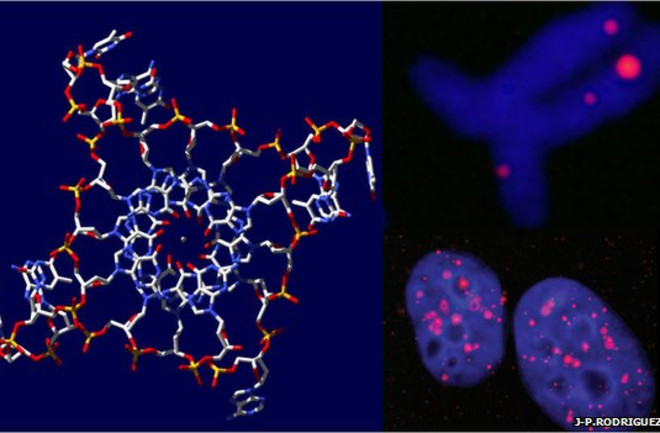 The quadruple helix structure is shown at the left. Fluorescent markers on the right show where the helix appears on an individual chromosome (top) and in cells (bottom). What does DNA look like? According to the biology textbooks of the last half century, it consists of a twisting ladder of base pairs: A with T and C with G. But a new study in Nature presents evidence that some human DNA may actually have four strands instead of two, and researchers say the quadruple helix may be linked to cancer. The now-ubiquitous double-helix structure was first published in the journal Nature in 1953 by scientists James Watson and Francis Crick from the University of Cambridge. Nearly 60 years later, scientists from the same institution have published a paper in the same journal, but their results suggest that there may be more to the structure of DNA than their predecessors thought. Researchers have been studying and searching for quadruple-helix DNA for the better part of a decade. They knew such structures existed in microscopic ciliates, but had never observed them in humans. By building antibodies that bind to the four-stranded structure, the Cambridge team was finally able to pin down the existence of the quadruple helix in human DNA and pinpoint its location on individual chromosomes. The researchers say the quadruple helix forms in the presence of unusually high levels of guanine (the G from the four nucleobases), so they call the structure a G-quadruplex. They also found that it forms during the phase of DNA replication when the genetic material is being copied, and that the number of quadruple-helices increased with each replication. The growth is somewhat similar to that of cancer, which alters the genetic code to increase DNA replication and cause tumor growth. This finding suggests that the quadruple-helix may be linked to cancer, researchers told the BBC. Understanding the helix's structure and function may well be key to solidifying its association with cancer. If proven true, researchers may one day treat the disease by making structure-specific antibodies to block the replication response that causes tumors.