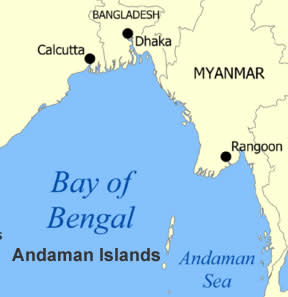 As I've been harping on and on for the past few years that the patterns of contemporary genetic variation are probably only weakly tied to past patterns of genetic variation (though Henry Harpending warned me about this as far back as 2004). A major reason that scholars operated under this presupposition is the axiom that most of the variation we see around us crystallized during the Last Glacial Maximum (~20 thousand years before the present). This may be true in some cases, but I doubt it is true in most cases. I was pointed to a classic case of this problem just today. A reader alerted me to a short paper from this spring which attempts to ascertain the point of origin of the dominant mtDNA haplogroup among the Onge tribe of the Andaman Islanders, M31a1. This is an interesting issue because some researchers proposed, plausibly in the past, that these indigenous people in the Andaman Islands represent the descendants of the first wave "Out of Africa," who took the rapid "beachcomber" path. Understanding the key to their genetics may then unlock the key to the "Out of Africa" event. Or so we thought. It looks like the human evolutionary past was a lot more complicated than we'd presumed. The paper is in the Journal of Genetics and Genomics. Mitochondrial DNA evidence supports northeast Indian origin of the aboriginal Andamanese in the Late Paleolithic:

In view of the geographically closest location to Andaman archipelago, Myanmar was suggested to be the origin place of aboriginal Andamanese. However, for lacking any genetic information from this region, which has prevented to resolve the dispute on whether the aboriginal Andamanese were originated from mainland India or Myanmar. To solve this question and better understand the origin of the aboriginal Andamanese, we screened for haplogroups M31 (from which Andaman-specific lineage M31a1 branched off) and M32 among 846 mitochondrial DNAs (mtDNAs) sampled across Myanmar. As a result, two Myanmar individuals belonging to haplogroup M31 were identified, and completely sequencing the entire mtDNA genomes of both samples testified that the two M31 individuals observed in Myanmar were probably attributed to the recent gene flow from northeast India populations. Since no root lineages of haplogroup M31 or M32 were observed in Myanmar, it is unlikely that Myanmar may serve as the source place of the aboriginal Andamanese. To get further insight into the origin of this unique population, the detailed phylogenetic and phylogeographic analyses were performed by including additional 7 new entire mtDNA genomes and 113 M31 mtDNAs pinpointed from South Asian populations, and the results suggested that Andaman-specific M31a1 could in fact trace its origin to northeast India. Time estimation results further indicated that the Andaman archipelago was likely settled by modern humans from northeast India via the land-bridge which connected the Andaman archipelago and Myanmar around the Last Glacial Maximum (LGM), a scenario in well agreement with the evidence from linguistic and palaeoclimate studies.

Geologically unless the Andaman Islanders' ancestors were accomplished open ocean travelers they almost certainly did arrive via Myanmar. The inference they're making is based on the likely false axiom that mainland Southeast Asia has been genetically stable for the past 10 to 20 thousand years

. It hasn't been genetically stable over the past 1,000 years!

The authors themselves offer up a good explanation for what's going on here in the conclusion:

In summary, by extensively studying a large number of Myanmar samples, our results failed to find any root lineage of haplogroup M31 in Myanmar, therefore suggesting that aboriginal Andamanese were unlikely originated from Myanmar, the closest region to the Andaman archipelago in geographic. Nevertheless, we still cannot completely rule out the possibility that the matrilineal landscape in Myanmar had been largely shaped by the Neolithic immigrants from the neighboring regions, addressing this issue needs extensive studying on the Myanmar populations. Significantly, our further analyses strongly suggested that Andamanese-specific M31a1 finds its origin in northeast India. Therefore, it seems that the ancient people bearing M31a root type likely had peopled the Andaman archipelago via the land-bridge connecting the Andaman archipelago and southeast Asia continent around the LGM.

Bingo! At a minimum it seems likely that the Onge have been resident in the Andaman Islands for ~10 thousand years. Therefore we should be cautious I think about making too many inferences as to whether their ancestors were resident only in Mynamar, or spanned the South China Sea to the Indus, and so forth. But, I think we can grant that they arrived via Mynamar, and were once resident in Myanmar. The disjunction between mtDNA lineages in their rather large sample strongly implies that Myanmar has seen major demographic reshaping since the ancestors of the Andaman Islanders parted ways with their mainland kin. This stands to reason. It is almost certainly likely that Myanmar was dominated by populations speaking Austro-Asiatic languages at some point in the past. These were replaced by the ancestors of the Burmans, Karen, etc. And to some extent even these have been displaced by newcomers, such as the Shan.

But the Austro-Asiatic people themselves probably came from further east.

If, and it's a big if, the kin of the Andaman Islanders were the population which immediatedly predated the Austro-Asiatic groups, then there have been two linguistic shifts, likely accompanied by major genetic turnover. In fact I suspect there were probably more transitions in the past. I doubt hunter-gatherer populations were quite as static as we sometimes seem to posit, at least in the past 40 thousand years. Here's a table of haplogroup frequencies:

And here is how the branches of M31 are related to each other: 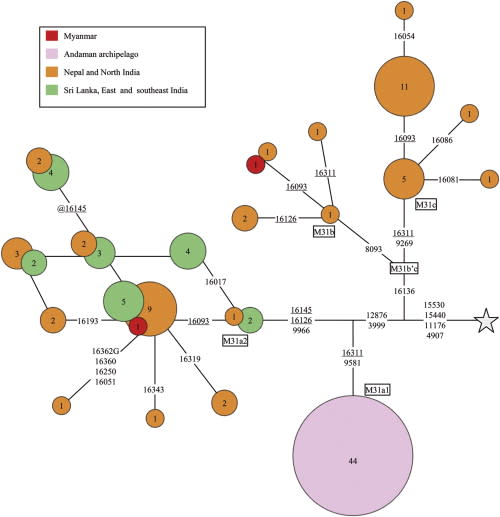 The Onge branch is distinct, as you might expect from an isolated island population. Using the molecular clock models they came up with a series of coalescences back to the last common ancestor (represented by the star in the figure above). I'll quote them:

Previous work has suggested the “recent settlement” of the Andaman archipelago about 24 ± 9 kilo-years ago (kya) (Barik et al., 2008). In view of the time estimation results based on the updated phylogeny tree of haplogroups M31, peopling the

(Table 2). Intriguingly, a similar result was achieved by studying the whole nuclear genome, in which the Andaman aboriginals were suggested to be originated from the potential ancestral populations of South Asian sub-continent before the admixture of ASI-ANI on the mainland (Reich et al., 2009). Noticeably, the paleoclimate evidence and data of Global Ocean Associates prepared for the office of Naval Research have showed that the sea level of Southeast Asia was about 120 m lower than that of today before 17 kya, and most of the sea level of Andaman sea was above 100 m today, supporting the existence of the potential land-bridge connecting Andaman archipelago and southeast Asia continent before the Last Glacial Maximum (LGM) (22–18 kya) ([Voris, 2000] and [Clark et al., 2009]). Taking into account the interesting distribution patterns and time estimation results of different subclades within haplogroup M31, it is likely that the ancestors of aboriginal Andamanese had arrived at Andaman arhcipelago around the LGM through the land-bridge before it was submerged with the raising of the sea level after the peak of the LGM.

They're right that their number is in rough alignment with the results from Reich et al. The Andaman Islanders diverged from "Ancestral South Indians" on the order of a few tens of thousands of years before the present. But I wonder as the value-add of their estimate when they have a interval over ~10 years on their expectation. That being said, it seems clear that this mtDNA estimate at least pegs a lower boundary. As cultural anthropology would tell us the Andaman Islanders diverged from mainland South Asians well before agriculture. And, the arrival of "Ancestral North Indians." On a final note, if the Andaman Islanders arrived ~20 thousand years before the present from the South Asian mainland they don't tell us very much about the "Out of Africa" people. They're not "living fossils," and it was frankly somewhat stupid probably to think they would be. Until recently the "Out of Africa" event was pegged at ~50 thousand years, at its most recent. Even assuming this date the Andaman Islanders arrived in their present location closer to the present than the point at which their ancestors left Africa. But now there is more of a tendency to accept the possibility that the "Out of Africa" event wasn't so cut & dried in any case, and may date as far back as ~100,000 years. If so we may simply have to acknowledge that fine-grained understanding of paleodemographics will always elude us if we can't get our hands on a sample of ancient DNA. Even among pre-agricultural peoples there was probably too much population genetic turnover for the palimpsest to be teased apart with enough subtly to read the tea leaves of the past