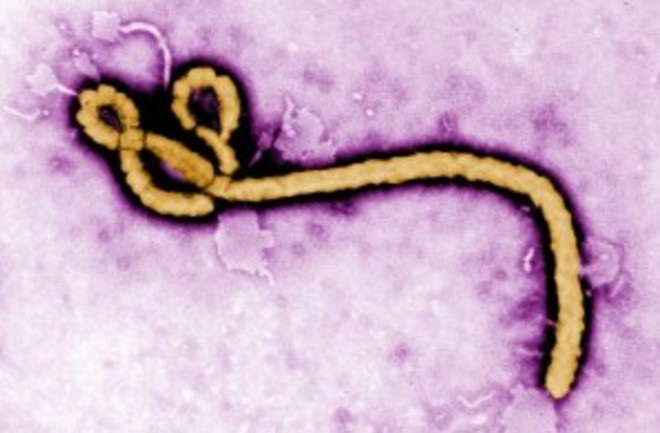 Transmission electron micrograph of Ebola virus. Credit: CDC Some of the most lethal viruses, including Ebola, may have met their match. A molecule related to plant-derived compounds known as indoline alkaloids appears to block crucial elements of replication in nonsegmented, negative sense (NNS) RNA viruses, an order that includes such unsavory members as Ebola, rabies and measles. The molecule, CMLDBU3402, could become the basis for an effective, broad-spectrum therapy to treat NNS viruses, according to the study, published today in the journal Chemistry & Biology. There are currently no effective therapies or vaccines for many NNS viruses, several of which are highly contagious and have high mortality rates. Ebola, for example, can kill 90 percent of those infected. Researchers in the study first identified a number of chemotypes that had not previously been screened for potential activity against NNS viruses. They identified several molecules within this group that appeared to inhibit infection in cells exposed to Ebola or another NNS virus, vesicular stomatitis, which primarily affects cattle, horses and swine.

The newly discovered compounds are illustrated as green molecules "blocking" the spread of orange Ebola virus virions from an infected cell. Image created by Claire Marie Filone and John Connor; Ebola virus micrograph by Chris Reed at USAMRIID. The most promising compound in the study — CMLDBU3402 — appeared to target viral RNA-dependent RNA polymerase (RdRp). RdRp is required for many aspects of RNA synthesis, which is how one virus replicates to become many. The enzyme is produced by all NNS viruses and inhibiting it appears to block transcription, preventing the spread of infection in the host. Because RdRp is found in all NNS viruses and is necessary for replication, researchers believe molecule CMLDBU3402 can be used to develop a treatment for the entire virus order, potentially wiping out not just Ebola and newer NNS discoveries such as the Nipah and Hendra viruses, but also old scourges including rabies, mumps and measles.