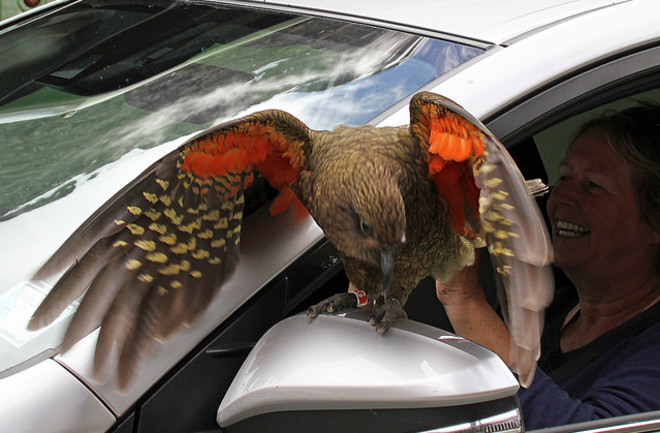 Image: Flickr/Tony HisgettInstead of parroting the author's own words (below), we will leave you with a video showing the contagious laughter-like vocalization of Kea parrots. We hope it doesn't ruffle any feathers. [embed]https://youtu.be/N37rN29nUIc[/embed] Positive emotional contagion in a New Zealand parrot. "Positive emotional contagions are outwardly emotive actions that spread from one individual to another, such as glee in preschool children or laughter in humans of all ages. The play vocalizations of some animals may also act as emotional contagions. For example, artificially deafened rats are less likely to play than their non-hearing-impaired conspecifics, while no such effect is found for blinded rats. As rat play vocalizations are also produced in anticipation of play, they, rather than the play itself, may act as a contagion, leading to a hypothesis of evolutionary parallels between rat play vocalizations and human laughter. The kea parrot (Nestor notabilis) has complex play behaviour and a distinct play vocalization. We used acoustic playback to investigate the effect of play calls on wild kea, finding that play vocalizations increase the amount of play among both juveniles and adults, likely by acting as a positive emotional contagion." Related content: Study finds that parakeet yawning is contagious. And super cute.Parrots are "more human" than chickens.Double feature: Duck, duck, dick!