Out of the Lab & Into the Mouth

Many pitfalls await the undergraduate in the laboratory. Bunsen burners! Liquid nitrogen! The slack work ethic of one's peers! The dreaded group projects! But the most common risk budding researchers face are the rubber glove-donners themselves, perpetrator and victim rolled into one lab coat-wearing pipetter, armed and often dangerous with great knowledge but little know-how. 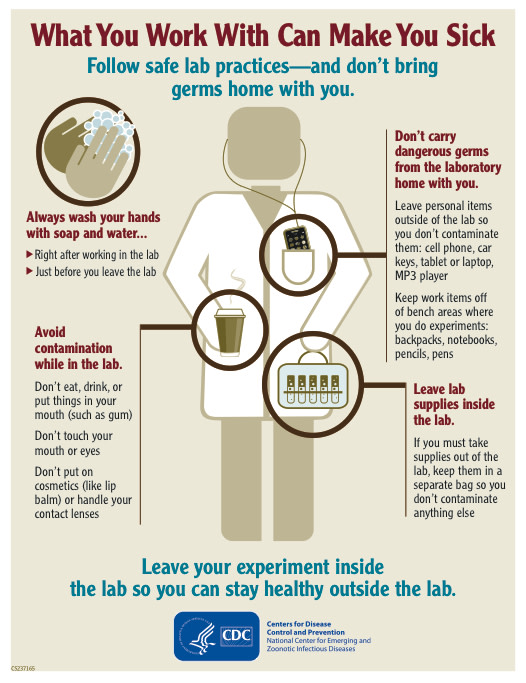 So perhaps we ought to greet a recent report from the CDC with little surprise. The study investigates the outbreak of laboratory-associated infections with Salmonella typhimurium, a microbe that is spread fecal-orally and which we most commonly associate with the consumption of chicken and the ownership of reptiles

. However, this pathogen is also used as a lab specimen for scholarly tinkering and research, and frequently plays a significant role in the laboratory escapades of a great many Microbiology 101 classes. From November 1, 2013 to May 3, 2014, 41 cases of salmonellosis were been reported in thirteen states, all associated with clinical and teaching microbiology labs in colleges and universities (1). The same flavor of S. typhimurium was responsible for all infections, a commercially available strain that is used for both teaching and quality control in research experiments. Of those 40-odd cases, 62% occurred in eager young scientists-in-training stuck in the pre-legal college purgatory below drinking age, i.e. 21 years and younger. Though the median age of those infected was 20 years, the ages of those identified in the study ranged from 1 year to 87 years. A laboratory-associated infection in a one-year child suggests that salmonella was possibly brought out of the lab and into the home via contaminated objects or clothing, raising further questions about laboratory decontamination habits, though the CDC's report doesn't go into any detail about individual cases. In the CDC's investigation of the "hows and whys" of this outbreak, researchers found that many ill people reported behaviors that put them at direct risk of infection via accidental contamination. These included failure to engage in regular handwashing as well as an occasional to chronic negligence in donning protective gloves and lab coats. Most critically, as alluded to above, there seems to be a crack in that necessary division between the laboratory and the outside world. Microbes meant for Petri dishes and test tubes partook of a raucous and infectious joyride into the real world via "contaminated lab coats, pens, notebooks, personal electronic devices, and other items that were use[d] while in the microbiology laboratory" (2). Most surprisingly, many of those infected in the outbreak that were interviewed did not recall having received any training on lab safety protocols and working practices. Perhaps they were simply distracted during such training lectures, tapping away on their phones with salmonella-soaked fingers, adding tags to their scientific selfies: #biofails #vectorlife. The CDC has gone so far as to say that laboratory-associated salmonellosis is a "public health problem"; this is not the first time that this pathogen has struck fear into the heart of coed bio nerds (3). From August 2010 to June 2011 a strain of S. typhimurium - ominously referred as "strain X" in the CDC's report - infected 109 individuals through 38 states (3). Twelve people were hospitalized and one died from the infection. The same set of conditions as this year's spate of infections were at the heart of this outbreak, with many of those infected reporting a recent history of education in microbiology teaching laboratories or having worked in clinical microbiology laboratories. Once again, many infections were brought beyond the lab and into homes to be generously shared among friends and family, resulting in many children and elderly among those diagnosed with an infection by this unique commercial strain X. These are not necessarily unexpected outbreaks, though they could not be more unnecessary. The laboratory is a sacred and confined space where research and biological tinkering must be safely contained. Microbes used for academic research and education should be restricted to the laboratory, to test tubes and Petri dishes and vials, not smeared along counters, pens, notebooks, and iPhones because of sloppy lab techniques and lapses in good hygiene. Experiments, especially those involving potentially pathogenic microorganisms, should remain in the lab. The release of research strains of S. typhimurium out of the lab and into homes highlights the weaknesses and shortcomings in the safety and security of university and clinical microbiology labs. As the ongoing epidemic of antibiotic-resistant microbes in our hospitals goes to show, good public health starts small with handwashing and glove-wearing. Teaching good laboratory technique is actually more than just a way to ensure good research results. It is also a guarantee of public safety and health as well as the establishment of habits that will guide the next generation of scientists as they combat more worthy challenges that the future will bring. Resources "The safe handling of microorganisms in the teaching laboratory is a top priority. However, in the absence of a standard set of biosafety guidelines tailored to the teaching laboratory, individual educators and institutions have been left to develop their own plans. This has resulted in a lack of consistency, and differing levels of biosafety practice across institutions." Check out this article

on recently developed biosafety guidelines for handling microbes in the teaching laboratory. And, lest we forget, there's aways mouth pipetting

to worry about. More from the Body Horrors archive: Salmonella in your marijuana

and Salmonella in/on Fluffy the snake