Out of South Africa? 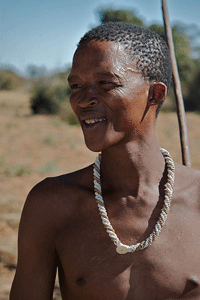 Apparently there's a new paper on Bushmen genetic diversity coming out in PNAS. It reports that this group is the most diverse in the world in terms of intra-population variance. This is not a great surprise after the much heralded Naturepaper

Since the paper is not on the PNAS website I can not evaluate it, but this seems like a very strong objection to me.

Henn admits that migration could certainly be a possibility, but counters that when a population migrates, typically only a subset moves to a new area, and this subset is less genetically diverse than the parent population. She argues that if a group left eastern African for southern Africa it would be expected to have less diversity in the south. "This is not what we find in the data," she says.

This is not addressing what I think is implicit in in Tishkoff's critique: the Bantu expansion

may have resulted in a near replacement of the original hunter-gatherer substrate of eastern Africa. Therefore, the presumably most genetically diverse source population from which the Bushmen derive may no longer exist. Of course there's no reason to assume that anatomically modern humans do come from eastern Africa. I simply think that there's plenty of historical money "left on the table" which could immediately question the plausibility of an "Out of South Africa" thesis. Hunter-gatherer groups like the Bushmen have likely had larger long term effective population sizes than farming groups, who may have expanded rather rapidly from a small initial group.