One Protein Makes Ebola Deadly. Scientists Can Turn it Off 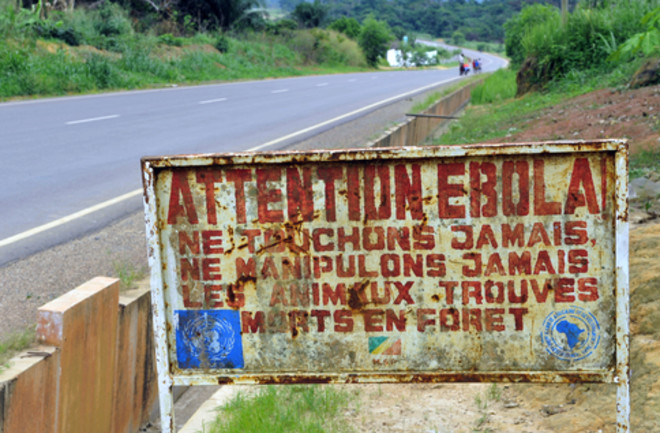 A sign in the Democratic Republic of the Congo warns people that Ebola is in the area. (Credit: Sergey Uryadnikov/Shutterstock)

The Ebola virus continues to ravage populations across Africa. But earlier this week, researchers reported that they’ve figured out what makes Ebola just so virulent. One particular protein is giving Ebola its punch, and researchers know how to switch it off. The find could lead to new vaccines and may give a huge boost to Ebola research safety.

The Ebola virus disease progresses quickly and is transmitted easily; it’s killed tens of thousands of people since the first major outbreak in 2014. Vaccines that would protect people from the disease have been in the works for years, but despite their successes in trials, they’re still in the experimental phase — none are widely available.

One of the reasons the Ebola pathogen is so virulent is that it has ways of thwarting the body from putting up a normal immune defense. The virus impairs the immune system’s internal communications network, delaying the body’s immune response long enough to do major damage. The body can’t catch up.

For the past few years, researchers have been homing in on a specific protein on the Ebola virus’ outer structure, called a nucleocapsid. Experiments in cells and tests in rodents have confirmed that the protein, called VP35, is a major factor in how Ebola disrupts the immune system. But exactly how VP35 would interact with the whole Ebola system — in a human — was unclear.

So researchers turned to closer approximations of humans: macaque monkeys.

Chris Basler is a virologist at Georgia State University who studies emerging viruses and how they interact with the immune system. Basler and his team, which included researchers from the University of Texas Medical Branch and the University of California, Irvine, created mutated versions of the Ebola virus that had a key function — the one that messes with the immune system — of their VP35 proteins disabled. Then, they exposed the macaques to it.

As the team expected, the monkeys didn’t get sick. The virus didn’t proliferate in the body — and, their bodies were able to put up a normal immune response.

“Despite the fact that the mutant virus grows at a really quite minimal level in the animal, it can induce a robust adaptive immune response,” explains Basler. “So we get antibodies; we get T- cell responses that can control infections.

“And that’s in contrast to how we think of the lethal [Ebola] virus disease, where it seems like the infection progresses so rapidly that you don’t really have time to mount a robust effective immune response,” he says.

More, this immune response to the mutant Ebola had a lasting effect that protected the monkeys against other strains: the wild, lethal Ebola. In essence, they were vaccinated. And the more mutant virus they were exposed to, the more immune they were to the wild Ebola.

“It was very striking,” says Basler. “There really was no sign of disease in the animals.”

Basler says the team isn’t promoting VP35-mutants as a new vaccine candidate just yet. Other vaccines in the works are quite effective, he says, and the safety tests and regulatory approval that would be required to get a vaccine with a live Ebola virus in it — mutated or not — would be intense.

The more immediate application of this work is that the VP35 mutant strain opens up avenues for much safer Ebola research.

“You wouldn’t be studying the immune evasion functions, but you could be studying all the other functions of the virus in a manner that would be safer than working with the fully wild type virus,” he says.