On the varieties of Roma

Dienekes has a pointer to a new paper on Gypsy genetics which surveys Y lineage variation among three Roma groups from Serbia in the context of Europe-wide Gypsy genetic variance, as well as their potential host (European) and source (Indian) populations. Since I recently posted on the topic, and Dienekes didn't post some of the figures, I thought I'd do so. In particular here's the MDS of the Gypsy groups in the international context: 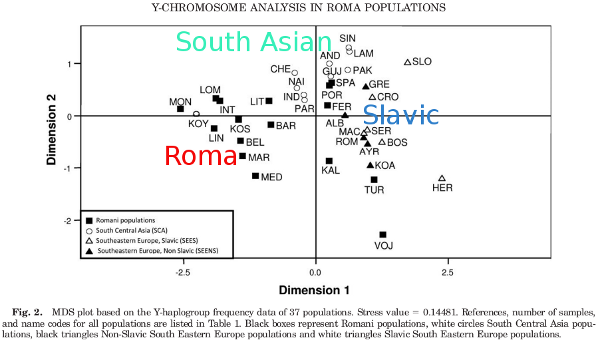 Remember that that's just the Y chromosomes, the male lineages. There are some broad affinities, but note how scattered the Gypsy groups are. I assume that's an artifact of large shifts in Y lineage frequencies because of genetic drift through bottlenecks. Additionally, the Vojvodina Roma group which was surveyed specifically in this study is a definite outlier (VOJ). As I stated above they typed three Roma groups from Serbia. They were resident in Kosovo, Belgrade and Vojvodina (which is north of Belgrade, near Hungary). They calculated admixture estimates for the three groups based on their Y haplogroup proportions, and found that ~100% of the male line ancestry of the Kosovo Roma was South Asian, ~75% of the Belgrade Roma was South Asian, but ~0% of the Vojvodina Roma sample had South Asian male ancestry. For what it's worth, they estimate that the balance of the Belgrade Roma ancestry was Slavic European (based on the frequency of the given haplogroups in regions and ethno-linguistic groups of Europe), while the Vovjodina Roma had all non-Slavic ancestry. The Vovjodina Roma men overwhelmingly carry a variant of haplogroup E1b1b1a2. Here's the frequency map from Wikipedia: 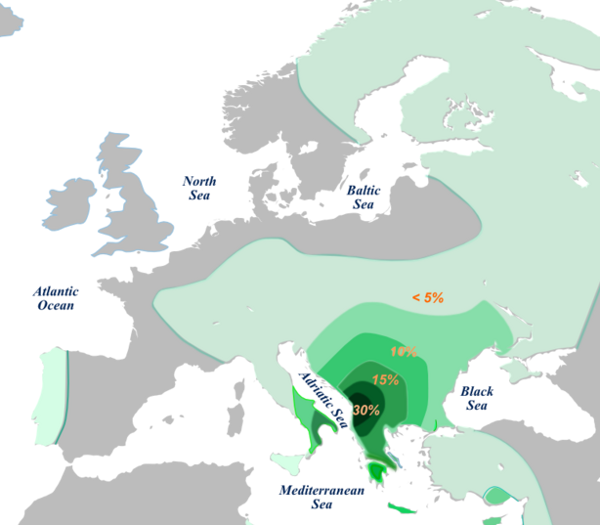 Since they're Kosovo Roma, and they seem to be a subclade of a lineage at high frequency among Albanians, it stands to reason that at some point in history a group of Albanian men, or a Albanian man, was culturally assimilated into a Roma identity. From the earlier charts I posted using variation on autosomal loci, instead of just a uniparental lineage, that shouldn't be too surprising. The interesting point, as Dienekes noted, is that despite the genetic variation the Roma are surprisingly similar culturally across Europe. In particular it is striking that they tend to continue speaking an Indo-Aryan language. It's not like this is unprecedented though. Some commenters have already observed striking analogies between Gypsies and Jews genetically and culturally, or at least in terms of the ethnogenesis of both groups as genetic and cultural compounds on the European scene. The analogy is tight enough that you have papers such as Multiple Origins of Ashkenazi Levites: Y Chromosome Evidence for Both Near Eastern and European Ancestries, which I believe will be recapitulated for the Gypsies broadly, and even the particular subset who are termed Roma. Image Credit: Wikimedia Commons