On the real possibility of human differences

I have discussed the reality that many areas of psychology are susceptible enough to false positives that the ideological preferences of the researchers come to the fore. CBC Radio contacted me after that post, and I asked them to consider that in 1960 psychologists discussed the behavior of homosexuality as if it was a pathology. Is homosexuality no longer a pathology, or have we as a society changed our definitions? In any given discipline when confronted with the specter of false positives which happen to meet statistical significance there is the natural tendency to align the outcome so that it is socially and professionally optimized. That is, the results support your own ideological preferences, and, they reinforce your own career aspirations. Publishing preferred positive results furthers both these ends, even if at the end of the day many researchers may understand on a deep level the likelihood that a specific set of published results are not robust. This issue is not endemic to social sciences alone. I have already admitted this issue in medical sciences, where there is a lot of money at stake. But it crops up in more theoretical biology as well. In the early 20th century Charles Davenport's research which suggested the inferiority of hybrids between human races was in keeping with the ideological preferences of the era. In our age Armand Leroi extols the beauty of hybrids, who have masked their genetic load through heterozygosity (a nations like Britain which once had a public norm against 'mongrelization' now promote racial intermarriage in the dominant media!). There are a priori biological rationales for both positions, hybrid breakdown and vigor (for humans from what I have heard and seen there seems to be very little evidence overall for either once you control for the deleterious consequences of inbreeding). In 1900 and in 2000 there are very different and opposing social preferences on this issue (as opposed to individual preferences). The empirical distribution of outcomes will vary in any given set of cases, so researchers are incentivized to seek the results which align well with social expectations. (here's an example of heightened fatality due to mixing genetic backgrounds; it seems the exception rather than the rule). Thinking about all this made me reread James F. Crow'sUnequal by nature: a geneticist’s perspective on human differences. Crow is arguably the most eminent living population geneticist (see my interview from 2006). Born in 1916, he has seen much come and go. For those of us who wonder how anyone could accept ideas which seem shocking or unbelievable today, I suspect Crow could give an answer. He was there. In any case, on an editorial note I think the essay should have been titled "Different by nature." Inequality tends to connote a rank order of superiority or inferiority, though in the context of the essay the title is obviously accurate. Here is the most important section:

Two populations may have a large overlap and differ only slightly in their means. Still, the most outstanding individuals will tend to come from the population with the higher mean. The implication, I think, is clear: whenever an institution or society singles out individuals who are exceptional or outstanding in some way, racial differences will become more apparent. That fact may be uncomfortable, but there is no way around it. The fact that racial differences exist does not, of course, explain their origin. The cause of the observed differences may be genetic. But it may also be environmental, the result of diet, or family structure, or schooling, or any number of other possible biological and social factors. My conclusion, to repeat, is that whenever a society singles out individuals who are outstanding or unusual in any way, the statistical contrast between means and extremes comes to the fore. I think that recognizing this can eventually only help politicians and social policymakers. 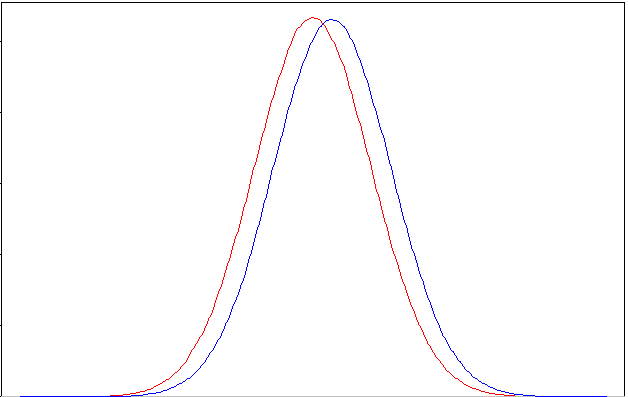 Observe the close overlap between the two distributions. Most of the variance occurs within both sets of populations. Now let's impose a cut-off of about ~130 on the curves: 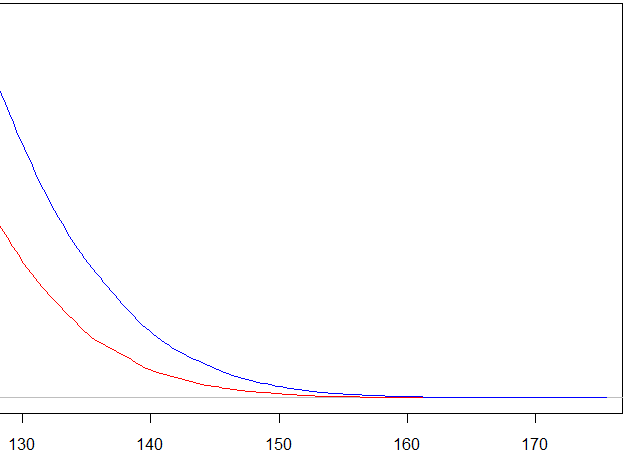 Now the similarity between the two curves is not as striking. As you move to the tails of the distribution they begin to diverge. In other words, the average of the two populations is pretty much interchangeable, but the values at the tails differ. Now let's move the cut-off to 145: The difference is now even more stark. Let's compare the ratios of the area under the curve for the two populations as defined by the cut-offs: Value at 100 = 1.26 (any given individual in the blue population is 1.26 times more likely to be above 100 than in the red population) Value at 130 = 1.83 Value at 145 = 28 A major caveat: quantitative traits are only approximately normally distributed, and there tends to be a "fat tail" dynamic, where deviation from the normal increases as one moves away from the mean. Concretely, this means that the ratios at the tails are probably not quite as extreme, as there are more individuals in all populations at the tails than you'd expect. What does this entail concretely? As Crow noted above if you sample from the tails of the distribution then very modest differences between groups become rather salient. Consider long distance running. To be successful in international competitions one presumably has to be many, many, standard deviations above the norm. One can't be a 1 out of 100, or 1 out of 1,000. Rather, presumably one should be 1 out of hundreds of thousands, at a minimum. This would be the fastest ~100,000 or so people in the world (out of 7 billion). With this in mind, we should not be surprised a priori at the success of the Kalenjin people of Kenya in this domain. They may have both the biological and social preconditions which allow their distribution of talent to be moderately above that of the human norm. Even a marginal shift can make a huge difference at the tails. 1 out of 100,000 is 4.26 deviation units above the mean. Increasing the mean of a population by half a standard deviation units (e.g., if 100 is the mean, 15 is the standard deviation, then for the population with the higher mean you'd be at 107.5) results in a disproportion in ratio of above 8:1 at 4.26 units (as measured in the first population). This is modest, about 1 order of magnitude, but consider possible gene-environment correlations and synergies that might ensue when you have a critical mass of very fast individuals. This could amplify the effect of a difference in distributions on a single variate (more importantly I suspect, consider that virtuosity in many domains requires an intersection of aptitudes many units deviated from the norm across many traits). In the early 2000s James F. Crow was responding to the Human Genome Project. As has been thoroughly covered elsewhere human genomics has probably underwhelmed in terms of outcomes 10 years out. But it is often the case that with new technologies we overestimate the short-term change which they will effect and underestimate their long-term consequences. I believe with the rise of mass genomics, a radical increase in population coverage and full genome sequencing, we may finally start to adduce the underpinnings of quantitative traits. We already have indirect methods, but I believe that by 2020 we will have direct means at our disposal. We'll have a good sense how deeply humans are commensurable on a population genetic level. I doubt it will change much in our values, but it may entail some rhetorical adjustments.