On the function of zebra stripes. 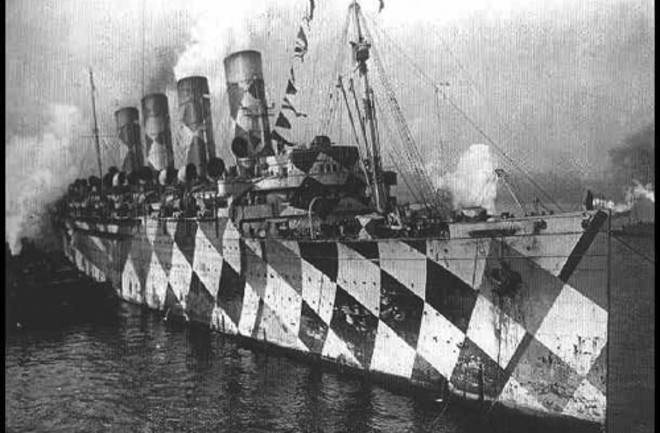 Photo: flickr/James VaughanMany prey species use camouflage to hide from predators. But other prey species, like zebras, have very prominent stripes that seem to make them stand out rather than hide. So why have stripes not been naturally selected out of the population? A popular explanation has been that stripes make moving targets difficult to catch by making their direction and speed harder to estimate. In fact, this explanation was the reason stripes and repeating patterns were painted on warships (left), patterns called "dazzle camouflage". The participants in this study played a computer game in which they tried to "catch" moving targets, or capture stationary ones, in order to directly test this hypothesis. The researchers found that stripes do indeed make targets harder to catch, but also make them more conspicuous when stationary.Motion dazzle and camouflage as distinct anti-predator defenses. "BACKGROUND:Camouflage patterns that hinder detection and/or recognition by antagonists are widely studied in both human and animal contexts. Patterns of contrasting stripes that purportedly degrade an observer's ability to judge the speed and direction of moving prey ('motion dazzle') are, however, rarely investigated. This is despite motion dazzle having been fundamental to the appearance of warships in both world wars and often postulated as the selective agent leading to repeated patterns on many animals (such as zebra and many fish, snake, and invertebrate species). Such patterns often appear conspicuous, suggesting that protection while moving by motion dazzle might impair camouflage when stationary. However, the relationship between motion dazzle and camouflage is unclear because disruptive camouflage relies on high-contrast markings. In this study, we used a computer game with human subjects detecting and capturing either moving or stationary targets with different patterns, in order to provide the first empirical exploration of the interaction of these two protective coloration mechanisms. RESULTS: Moving targets with stripes were caught significantly less often and missed more often than targets with camouflage patterns. However, when stationary, targets with camouflage markings were captured less often and caused more false detections than those with striped patterns, which were readily detected. CONCLUSIONS: Our study provides the clearest evidence to date that some patterns inhibit the capture of moving targets, but that camouflage and motion dazzle are not complementary strategies. Therefore, the specific coloration that evolves in animals will depend on how the life history and ontogeny of each species influence the trade-off between the costs and benefits of motion dazzle and camouflage."

Discoblog: NCBI ROFL: Your rug is so ugly it makes me sick. Literally.

Discoblog: NCBI ROFL: Lions at the zoo not roaring enough. What to do?