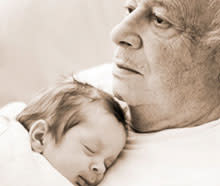 Older men have an increased risk of fathering children who eventually develop bipolar disorder, according to new research. It's the latest study to refute the earlier theory that men could father children into their old age with no ill effects; other recent studies have linked older fathers to an increased risk of miscarriages, and to children with schizophrenia or autism.

The theory linking paternal age with an offspring’s health rests on the genetics of aging sperm. Spontaneous mutations can accumulate in the genes of a man’s sperm cells as he ages. These cells divide as many as 660 times by the time a man reaches 40, by some estimates. Each division increases the risk of acquiring a harmful mutation from erroneous gene copying, the theory holds [Science News].

Women are born with their full complement of eggs already in place in the ovaries, and therefore don't have to worry about increased genetic errors as they age. In the study, published in the Archive of General Psychiatry [subscription required], researchers

identified 13,428 patients in Swedish registers with a diagnosis of bipolar disorder. For each one they randomly selected from the registers five controls who were the same sex and age but did not have bipolar disorder [BBC News].

After controlling for factors such as the family's history of mental illness, they found that the older the father, the greater the likelihood of a bipolar child.

[T]he researchers found that children born to fathers older than 30 had an 11 percent higher risk of developing bipolar disorder compared to younger fathers. Children whose fathers were older than 55 had a 37 percent increased risk [Reuters].

The correlation was particularly pronounced in early-onset bipolar disorder that is diagnosed before the age of 20, and which is believed to have a strong genetic component. Image: iStockphoto Related Post: Men Have a Biological Clock, Too