Older Dads Pass on More Mutations to Their Kids 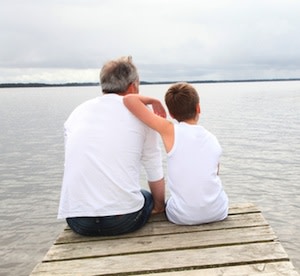 The hard-working precursor cells that produce sperm just can't catch a break. Since men make sperm throughout their lives, these cells have to divide again and again, sending one copy of themselves off to become sperm cells each time. DNA doesn’t always copy itself perfectly, so over the years, genetic errors pile up

. And now a new study has quantified

just how many mutations sperm will accumulate---and pass on to any offspring---for fathers of various ages. Scientists think that these mutations may be partly to blame for the fact that children with older fathers tend to have higher rates of bipolar disorder

. In this study, Icelandic researchers sequenced the whole genomes of 78 family groups, consisting of two parents and a single offspring, many of whom had mental disorders. Looking at the child's DNA, researchers could recognize de novo mutations

, which come from errors in either the egg or the sperm that gave rise to the child, and, based on the sequences near the error, they traced the mutation to either the mother or the father. It turns out that men transmit more mutations than women, and on average, for each increasing year of age, a father passed two additional mutations on to his offspring

. By the time a man reached the age of 40, his offspring had on average 65 random mutations that traced back to the paternal genetic material---that’s 260% more mutations than a 20-year-old dad would, on average, give to his children. Earlier research has shown that older men are more likely to father children with bipolar disorder, schizophrenia, and autism. Young fathers, however, do not guarantee healthy children, nor to old fathers doom their children to problems. Some of the autistic participants were the offspring of dads in their 20s, and while the children of older dads did have more mutations, they didn't always develop mental disorders as a result. Still, this potential genetic link between fathers' ages and their children's health suggests that the growing numbers of older dads

Image of father and son via Shutterstock