too A few readers reminded me of the recent Rachel Caspari article in Scientific American, The Evolution of Grandparents. It's actually based on her earlier research, published in PNAS in 2004, Older age becomes common late in human evolution. I was already pointed to this paper by Milford Wolpoff, who seems to be of the opinion this is a very underappreciated dynamic in our species' history (note: he's married to Caspari). And Wolpoff sent me a copy of the Scientific American article too, so it's been in my "to read" folder for a bit. Honestly it's a lot more persuasive than the scientific paper because it's so non-technical. It really makes me appreciate the power of science communication. I don't know anything about the analysis of dental remains, so I really hummed along through a lot of the paper with minimal comprehension. With the article Caspari could present her results and interpretation more cleanly. 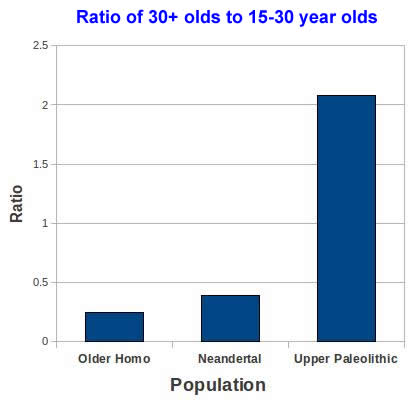 The major finding in the PNAS finding, which is reported in the Scientific American article, is the ratio of parents to grandparents in a total sample of ~750 remains separated by population class varies a great deal. Parents here means those who are 15-30 years old in age, and grandparents are those who are 30+ years in age. The major qualifier here is obviously potential, but that's a side issue. What the authors found in their sample was quite striking: notice the huge qualitative shift when you move to a population set of Upper Paleolithic behaviorally modern humans (less than 50,000 years before the present). In contrast, the European Neandertals much more resemble the larger collection of archaic Homo (most of which would presumably have been termed "archaic H. sapiens" in the past because they span 50 to 150,000 years B.P.). This still leaves the question of whether this is nature or nurture is left hanging. But in the Scientific American article Caspari reports a further set of results from another sample: West Asian anatomically modern humans and Neandertals (this sample spans 40 to 110,000 years B.P.) The major finding is that both populations tended to cluster together in their ratios, which were lower than Upper Paleolithic Europeans. The implication that Caspari draws is that the change was not one of biology, because West Asian and European Neandertals would presumably form a monophyletic clade against West Asian and European anatomically modern humans (the tree would have four branches, with two sets of two). And yet on this particular trait behaviorally modern humans are particularly distinctive, and the two West Asian populations are next in line. The authors' ascribe this to the milder climate of Western Asia, but as a Malthusian I think we need to be careful of this sort of conclusion. It may be that environmental variables are the biggest factors in long term population structure, but just as often intra-specific competition driven by scramble for scarce resources is also a major factor. Did the peasants of the lower Yangtze live a richer and easier life than the nomads of Mongolia? Because the density was so much greater in the lower Yangtze the reality is that there wasn't that much variance on the margin of subsistence. Personally I am not that convinced that these results confirm a cultural origin for the change in ratios. They are certainly consistent with it. But one could suggest that a gene of rather large effect swept across human populations, introgressing across distinct lineages. Ultimately this is where genomics may have some utility. Once we have some solid biology around the grandmother hypothesis we may be able to compare the genetic architecture of hominin lineages which we know from ancient DNA. Overall Rachel Caspari presents to me a entirely reasonable case for a series of positive feedback loops being triggered by a change in the age ratio structure of human populations. But I think it is just as likely that the change in ratio was an effect of some other cultural or biological innovation. This change was what resulted in various knock-on effects, which might include the rise of elder wisdom, the ratchet-process of rapid cultural evolution, and accumulation of skills.