Advanced Paternal Age Is Associated with Impaired Neurocognitive Outcomes during Infancy and Childhood:

A sample of singleton children (n = 33,437) was drawn from the US Collaborative Perinatal Project. The outcome measures were assessed at 8 mo, 4 y, and 7 y (Bayley scales, Stanford Binet Intelligence Scale, Graham-Ernhart Block Sort Test, Wechsler Intelligence Scale for Children, Wide Range Achievement Test). The main analyses examined the relationship between neurocognitive measures and paternal or maternal age when adjusted for potential confounding factors. Advanced paternal age showed significant associations with poorer scores on all of the neurocognitive measures apart from the Bayley Motor score. The findings were broadly consistent in direction and effect size at all three ages. In contrast, advanced maternal age was generally associated with better scores on these same measures.

Below the fold I've reformatted some numbers from a model the authors offered in the paper:

As you can see, controlling for many factors older fathers seem to produce duller offspring. A few points of difference in the mean can have large effects on the tails, so this is not trivial. The biological rational for this is laid out in the paper, older fathers are likely to pass on more mutations to their offspring because sperm replicates enough that errors are likely to slip past DNA repair mechanisms. Older fathers within a population increases genetic variation by increasing genetic load (therefore, the contention that de novo mutations tend to come through the paternal line), but may also decrease mean fitness. I'm not too interested in the intelligence tests for the super-young, but the WISC and WRAT for 7 year olds is notable (though it would be critical to follow up into adulthood as the effects of paternal age might wear off). Now, some data from the GSS, here is the mean age when the first child is born to categories of individuals who have a particular score on a vocabulary test. In short, the stupid people are on the left and the smart on the right (0 out of 10 vs. 10 out of 10). 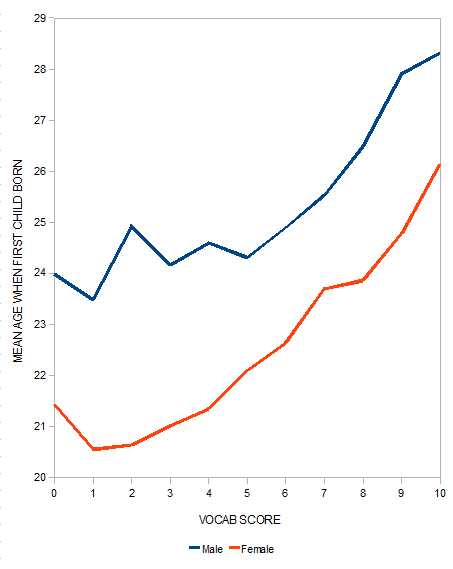 As you can see the smarter you are the older you are when your first child is born. I doubt this surprises anyone. From the paper:

With respect to the mechanism of action underpinning these findings, several hypotheses warrant further scrutiny. While twin studies have demonstrated that cognitive ability and brain structure are heritable...studies based on sibships within the CPP have also confirmed that socioeconomic factors play a role in mediating the heritable aspects of intelligence...With respect to paternal age, a broad range of socioeconomic factors improve with increasing age, thus most commentators believe that the offspring of older parents would have better access to health and educational services compared to the offspring of younger parents (who tend to have lower education and poorer income)...For example, Fergusson and Lynsky...found that offspring of younger mothers tended to be born into relatively poorly educated and socially disadvantaged families. These authors commented that children born to young mothers were exposed to less nurturing and more changeable home environments. One would expect that such mechanisms would also operate with respect to paternal age. Clearly, our findings linking APA with impaired neurocognitive development cannot be readily explained by these social mechanisms.

There's an alternative model here: those who have children young are simply less intelligent and more impulsive on average, and these traits are heritable. But ultimately this still doesn't refute the primary finding of this paper, that older fathers produce duller children than we would expect them to, especially given the advantages that older fathers tend to have. Perhaps one might do a cost vs. benefit analysis about the storage of sperm by young men for utilization later on in life when they find that "special someone"?