Oh, the Irony: Canadian Pigs Get Swine Flu From an Infected Human 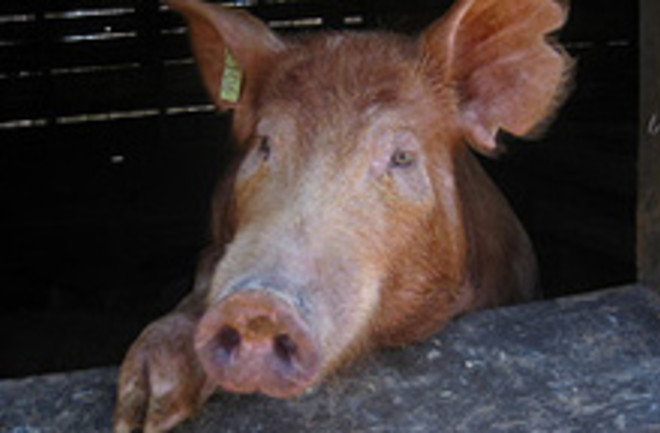 In an ironic twist to the swine flu epidemic, an infected farm worker has infected a Canadian herd of pigs with the virus, and the development is a bad public relations blow for the pork industry. The outbreak came on an isolated Alberta farm after

a farm worker returned from Mexico on April 12 and had contact with pigs on the farm two days later. On April 24, pigs began showing signs of influenza; about 220 of the 2,200 pigs on the farm were found to be infected with H1N1 [The Globe and Mail].

The farm remains quarantined although the human and all the pigs have recovered from the flu. World Health Officials note that the virus hasn't yet been found in other pigs, including any pigs in Mexico--although epidemiologists are testing pigs in the towns where the flu first emerged in humans. The WHO has also begun calling the virus by its scientific name, H1N1, to avoid confusing consumers (the virus is passing from human to human with sneezes and coughs, like a seasonal flu virus).

There is no risk of contracting influenza from pork products. Flu viruses are fragile: They can survive only hours outside a live body – human or animal – and are easily destroyed in meat by cooking [The Globe and Mail].

Still, Canadian pork industry says that exports have dropped 10 to 15 percent as other nations took precautions.

With China now banning Alberta pork specifically, and more than a dozen countries banning Canadian pork and live hogs, the worry is how Canada's export-dependent industry is going to fare should the situation snowball out of control [Canwest News Service].

Researchers are advising pig farms to take precautions, and to isolate any human workers or pigs who show flu symptoms. But they say

that even if the virus were to take root in the broader pig population, odds are it would become more adapted to pigs and less adapted to humans. The likelihood of the virus genetically morphing into a new, more deadly strain capable of jumping from pigs and back into humans is extremely low [Scientific American].

Canada has reported 140 cases of swine flu in humans, with one young girl in Alberta hospitalized for severe symptoms.

In Geneva on Tuesday, the World Health Organization said 1,490 cases had been officially confirmed in 21 countries [The New York Times].