Of pigs, people and porcine polygenism 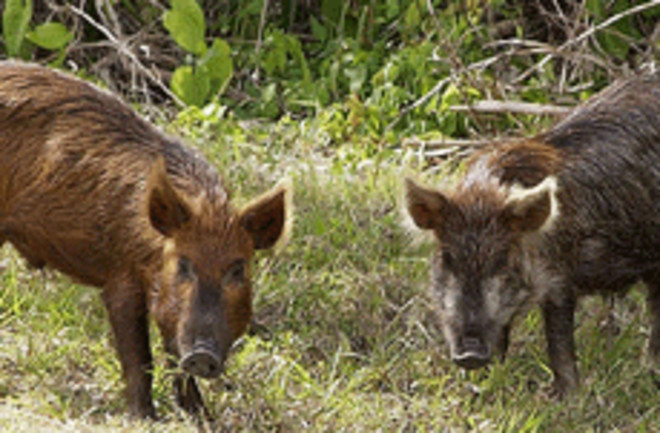 Jared Diamond famously argued in Guns, Germs and Steel that only a small set of organisms have the characteristics which make them viable domesticates. Diamond's thesis is that the distribution of these organisms congenial to a mutualistic relationship with man shaped the arc of our species' history and the variation in wealth that we see (though his a human-centric tale, we may enslave them, eat and use them as beasts of burden, but these are also species which have spread across the world with our expansion). This thesis has been challenged, but the bigger point of putting a focus on how humans relate to their domesticated animals, and the complex co-evolutionary path between the two, is something that we need to consider. In a plain biological and physical sense animals have utility; we eat them, and for thousands of years they were critical to our transportation networks. Some have argued that the rise of Islam, Arab monotheism, was contingent on the domestication of the camel (which opened up interior trade networks previously unaccessible). In The Horse, the Wheel, and Language: How Bronze-Age Riders from the Eurasian Steppes Shaped the Modern World the argument is made that the distribution of the Indo-European languages has to do with the facility of Central Eurasian plainsmen with their steeds. And of course there is the domestic dog, arguably the one creature which is able to read our emotions as if they were a con-specific. I suspect that the evolution and ethology of domesticated animals will offer a window into our own evolution and ethology. Konrad Lorenz famously believed that humans were going through their own process of domestication all the while that they were selecting organisms suited to their own needs. More pliable, less intelligent, faster growing and maturing, and so forth. Know thy companions, and know thyself, so to speak. What about an animal as intelligent as a dog, but famously tasty? (the combination of the two characters causing some ethical tension in the minds of many) I speak here of the pig. A few years ago research came out which showed that pig-culture was introduced to Europe from the Middle East. That is, Middle Eastern pigs came with Middle Eastern people in all likelihood. But modern European pigs do not derive from these lineages, rather, by comparing modern genetic variation with ancient DNA the authors showed that the Neolithic pigs had been replaced by local breeds. Just as pigs can go feral and fend for themselves rather easily, it seems that their basic morph can be derived from wild boar populations easily as well (by contrast, it will perhaps take some effort to derive a pekingese from wolf populations, offering a reason for why small dogs seem to have emerged once). A new paper explores the evolutionary history and phylogeography of the pigs of the swine-loving societies par excellence, those of East Asia. Patterns of East Asian pig domestication, migration, and turnover revealed by modern and ancient DNA:

The establishment of agricultural economies based upon domestic animals began independently in many parts of the world and led to both increases in human population size and the migration of people carrying domestic plants and animals. The precise circumstances of the earliest phases of these events remain mysterious given their antiquity and the fact that subsequent waves of migrants have often replaced the first. Through the use of more than 1,500 modern (including 151 previously uncharacterized specimens) and 18 ancient (representing six East Asian archeological sites) pig (Sus scrofa) DNA sequences sampled across East Asia, we provide evidence for the long-term genetic continuity between modern and ancient Chinese domestic pigs. Although the Chinese case for independent pig domestication is supported by both genetic and archaeological evidence, we discuss five additional (and possibly) independent domestications of indigenous wild boar populations: one in India, three in peninsular Southeast Asia, and one off the coast of Taiwan. Collectively, we refer to these instances as “cryptic domestication,” given the current lack of corroborating archaeological evidence. In addition, we demonstrate the existence of numerous populations of genetically distinct and widespread wild boar populations that have not contributed maternal genetic material to modern domestic stocks. The overall findings provide the most complete picture yet of pig evolution and domestication in East Asia, and generate testable hypotheses regarding the development and spread of early farmers in the Far East.

They used conventional phylogeographic techniques to catalog the variation in modern populations, as well as supplementing their data set with ancient samples. Here the genetic variance they're looking at is the mtDNA, the maternal lineage. Easy to get at, and easy to analyze (lots of it, and non-recombinant). In general they seem to have found that there is a common genetic heritage of East Asian domestic pigs, who are embedded geographically among varieties of wild pig who exhibit localized genetic variants. Additionally, there are other varieties of domestic pig in Southeast and South Asia who seem to have arisen from their own boar populations (though there is a Pacific pig variant which seems to have been from mainland Southeast Asia, but that original source population has now been replaced by East Asian pigs). Finallythey find a strong continuity between ancient domestic East Asian pigs and the modern populations. This is a contrast with the findings in European which exhibited disjunction between past and present. Perhaps this has to do with the fact that East Asian pigs are more genuinely indigenous, derived from local wild lineages with regional adaptations, while the Middle Eastern pigs brought to Europe were short-term kludges easily superseded by domesticates derived from European boar populations.

This figure shows the nature of haplotype sharing between wild and ancient & contemporary domestic pigs. The larger the pie, the more frequent the haplotype. The slices of the pie by color show wild (black), ancient (red) and modern domestic (white) shares of that haplotype. The line across the networks show the putative separation between the genetic variants relatively private to the wild populations, and those which lean toward a mix of wild & domesticates. The wild populations seem more diverse. 45 haplotypes out of 167 samples are found only in wild specimens, 92 haplotypes out of 339 samples are found only in domestic specimens, and 21 haplotypes are found in both 87 wild and 582 domestic pigs. One assumes that the domesticates are derived from a small subset of wild pigs, and that population underwent demographic expansion within the last 10,000 years. That's not too different from our species, we're descended from a small subset of H. sapiens, and we've undergone major demographic expansion. Our "wild" cousins among the great apes tend to have a lot more genetic variation even within their small populations because their demographic history has presumably been a bit more staid. As man was, so shall he turn his domesticates. And yet a major difference between the domestic pig and man seems to be that some variant of multiregionalism, the evolution of modern pigs from local lineages, and their subsequent hybridization to produce a genetically unified species, has been operative. One major caution with these studies is that they're looking at mtDNA. The dog genomics work has been modified and overturned when they shifted from the mtDNA that most phylogeographers focus on to the total genome. One does not know the evolutionary history of an organism by one locus alone. The pig is a peculiar beast, retaining its feral nature as evident by the periodic reemergence of morphs from released domestic populations which have no difficulty in going "wild." There are 4 million feral hogs in the United States, and they can get quite large indeed. What would the pekingese do in a world without man? Probably be some other creature's meal. But generalists like the pigs would no doubt flourish. The story of the pig is a story of piggybacking, so to speak, on the success of the upright ape and spreading across the world on the backs of the other white meat. Let me finish from the author's conclusion:

The evidence presented here suggests the following evolutionary history of pigs in East Asia. Having originally evolved in ISEA [Island Southeast Asia], wild Sus scrofa migrated (without human assistance) across the Kra Isthmus on the MalayPeninsula into Mainland Asia. From here, they spread across the landscape and, after traveling over land bridges, onto the islands of Japan, the Ryukyu chain, Taiwan, and Lanyu where they evolved unique mitochondrial signatures. After millennia of hunting and gathering, a major biocultural transition occurred early in the Holocene during which human populations in East Asia domesticated a variety of plants and animals, including pigs. This process took place at least once in the Yellow River drainage basin wheremilletmay have been first domesticated as early as 10,000 B.P...and may have also taken place independently in the downstream Yangtze River region where rice may have been domesticated...Two things are clear from the ancient DNA evidence presented here. First, unlike Europe, modern Chinese domestic pigs are the direct descendants of the first domestic pigs in this region. Second, despite the occurrence of a genetically distinct population of wild boar throughout modern China, this population has neither been incorporated into domestic stocks nor exterminated.