Now *This* Is a Cell Phone: Using Radio Waves to Control Specific Genes in Mice 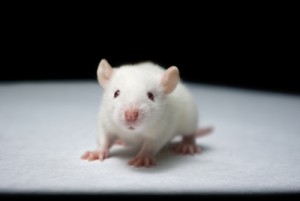 With some clever genetic engineering but without ever touching a cell or an animal, scientist can remotely control cells using ultrasound

. The electromagnetic waves can be used to selectively heat up parts of cells and activate a gene to make insulin in mice

, according to a recent study published in Science. But why care about radio waves if we have light and ultrasound? Radio waves have a couple distinct advantages over existing techniques. In the current study, the radio waves didn't heat up a whole patch of tissue or even a whole cell---it only affected specific pores in the cell, called TRPV1

, that open in response to heat. To get this specificity, the scientists made special iron oxide nanoparticles attached to an antibody that only sticks to TRPV1. When they turned on the radio waves, the iron oxide particles warmed up and opened the TRPV1 channel, minimally affecting the rest of the cell or surrounding cells. Ultrasound, on the other hand, heats up a whole patch of tissue to 42° Celsius

, which could have damaging or confounding effects on the cells. Radio waves, unlike light, can also penetrate deep into tissue. To show how the radio could safely work inside an animal, scientists injected mice with special cells that had been genetically engineered to include both the TRPV1 pore and a "gene switch" that would release insulin when exposed to calcium. Then they got those cells in the mice to start making insulin with a little Rube Goldberg

-esque cellular machine: heat from the radio waves opened the TRPV1 channels, calcium rushed into the cells through the open TRPV1, the flood of calcium turned on the insulin gene switch, and, finally, the cells began making insulin. (The whole chain of events makes you appreciate the complexity of biology, right?) In one last step, the scientists did away with the synthetic iron oxide nanoparticles altogther. They got cells to produce their own iron nanoparticles, a iron storage protein called ferritin. When they tested ferritin in cells, it was 2/3 as effective at inducing insulin production as the synthetic nanoparticles. There could be medical applications for activating genes in stem cell therapy in the future, but for now, this is just pretty cool: scientists can turn on some radio waves and hack right into the cellular machinery of a mouse. [via Nature News