Not misunderstanding the past requires suspicion

It was famously reported last winter that Bushmen seem to differ genetically amongst themselves more than Europeans and Asians do. These two latter groups have been separate for at least 40,000 years.

The italics are my words, emphasized by the commenter. The bolding is the commenter's as well (I had to fix some HTML in that comment, but I think I corrected in line with the commenter's intent). I read (and blogged) the paper cited, so I'm well aware of the low bound value implying more recent common ancestry of East and West Eurasians posited here. I'm moderately skeptical. Part of the issue is that these sorts of computational models are tricky, and most of us aren't versed in the various moving parts which go into constructing the model. Consider the following from the cited paper:

, ancestral migration rate is the proportion of migrants before the Out-of-Africa exodus) and an African exodus of modern humans between ~40,000–100,000 years ago...By tuning the replacement rate δ, we then simulated scenarios that consider different levels of replacement of archaic hominids by modern humans (i.e. different levels of introgression of archaic material into the modern gene pool), including the most extreme cases of complete (δ = 1) and no replacement (δ = 0) as well as several scenarios with varying intermediate levels of replacement...The summary statistics were calculated by merging all population samples (except for global FST) in order to minimize the effects of recent demographic events related to the continental populations. We thus considered in all models a constant size for the three modern human populations.

...highest ψ1, the ψ1 of this model is significantly higher after correction for multiple testing when compared with the other ψ1 values, P<0.01).

replacement of archaic hominids (difference between ψ1 is not significant for this pairwise comparison), indicating that a small contribution of archaic humans to our present-day genome cannot be completely ruled out....

This part of the paper produced predictions which are likely false. The highest probability scenario derived from their model is "full replacement," which was close to falsified in less than a month after the publication of the paper (though until more data comes in we should still obviously include in some wiggle room for error in the results which indicated Neandertal admixture). But even the second highest probability model, 0-1% archaic admixture, is also probably false. Neandertal admixture is estimated between 1-4%, with the probability naturally that it will be within the interval, not on the margin (I am to understand that future research will clarify the fraction, and it is nearly the midpoint, not along the edges of the distribution). Obviously that does not necessarily falsify the contention that Europeans and East Asians share ancestors ~20,000 years BP, but, it should make us cautious of putting too much weight on models which are likely sensitive to a range of inputs when it comes to putative demographic models. I assume that a very similar model with some parameters fine-tuned could align appropriately with the more recent findings which confirm admixture via ancient DNA. But what's the utility of such models post facto? 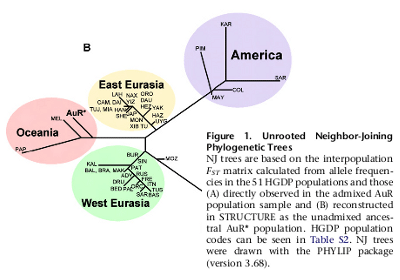 A bigger issue when it comes to positing relatively recent common ancestry of Eurasians has to do with the fact that in many analyses (though not all) it is clear that East Asians are closer to Oceanians than Europeans. When it comes to Oceanians, Papuans, Melanesians, and Australian Aboriginals, the archeology is nicely clear and distinct. It looks as if Sahul was settled ~50,000 years ago. The assumption currently is that the modern populations of the highlands of Papua and the Australian Aborigines are descendants of these populations. This means that Oceanians have been isolated from other non-Africans for ~50,000 years, excluding recent admixture (e.g., Austronesian influence, European admixture among Aborigines). By intuition then East Eurasians and West Eurasians should form a clade with Oceanians as an outgroup, and yet this is not what we always see (though we do see it sometimes). The above is a visualization of Fst distances from the recent paper on Australian Aborigines. It is likely that you are seeing more than simply time to last common ancestor between the groups. Some of these populations have been isolated, and likely gone through population bottlenecks (both Amerindians and Oceanians). 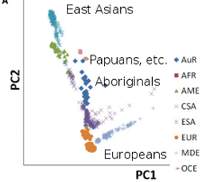 To the right is a PCA from the same paper. It's the standard one you see of HGDP populations, along with the addition of Aborigines, who clearly have a great deal of admixture with Europeans. Rather, focus on the Papuans. Remember that you're capturing only the two largest components of variation in the HGDP set. But the PCA 3 and 4 show that Eurasians and Africans cluster against Oceanians and Amerindians, who are distributed orthogonally with respect to each other. I personally wouldn't read too much into the Papuan position closer to Europeans than East Asians, though I don't think it is admixture with Europeans in this case. Let's look at this in another way. Below is a standard STRUCTURE bar plot from the same paper, K = 2 to K = 8. The populations on the far right on Oceanian, Aborigines, Melanesians and Papuans. On the far left Africans, then East Asians, then Europeans (I removed South and Central Asians): 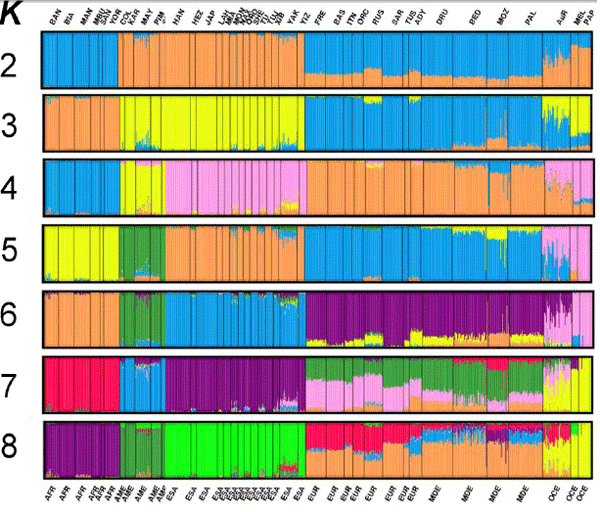 Again, you have to interpret these results with care. East Asians, Amerindians, and Oceanians tend to separate off from Eur-Africans first. Later you see the obvious European admixture among Aborigines, as well Austronesian admixture among the Melanesians. But still observe that the genetic variation among Oceanians and Eurasians tends to split off from Europeans first as you ascend up the K's. Now let's look at another paper, The Genetic Structure and History of Africans and African Americans. Two figures. 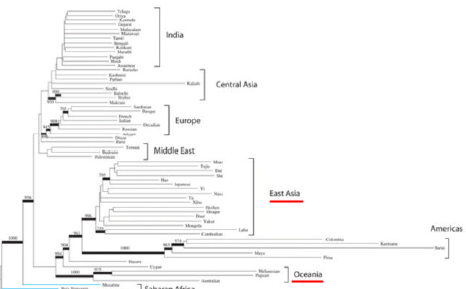 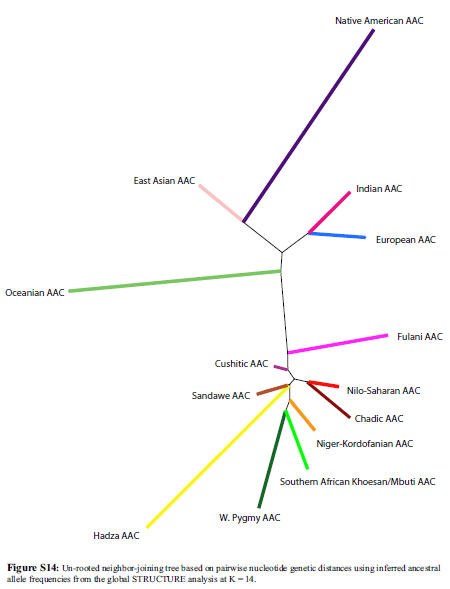 As they say, curiouser and curiouser. The second figure might actually be consistent with a branching off of Oceanians far earlier than Europeans + East Asians. But look again at the Amerindian branch. All the research currently suggests they're derived from Siberian groups. Their genetic distance is probably a function of population bottlenecks and/or lack of genetic exchange with populations on the World Island. One issue is that this second paper has as inputs a wider range of African populations. Here's a slice of the STRUCTURE results from this paper:

Finally, a tree from Worldwide Human Relationships Inferred from Genome-Wide Patterns of Variation: 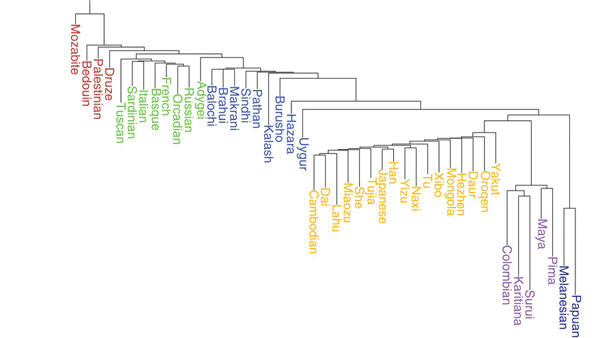 I kind of saturated this post with charts, but the reason is that these sorts of charts always run through my head whenever I'm trying to evaluate a historical or archaeological hypothesis. Obviously this doesn't prevent flubs. I so internalized the model whereby non-Africans are a branch of Africans that I neglected to consider the variant genetic distances of non-Africans from Africans, even excluding those with obvious recent admixture from Sub-Saharan Africa such as the Mozabites. Additionally, you always have to account for local genetic peculiarities due to isolation which might deceive as to the time of the last common ancestor between populations because of different evolutionary parameters on some branches of a lineage. And obviously the Neandertal admixture story combined with other confusing results from ancient DNA should make us exceedingly cautious about how rock solid the priors are which we use to frame our probability calculations for any given assertion. So back to Eurasians and Oceanians. The key for me is that I do believe that archaeologists are correct in pegging the population of Sahul, New Guinea and Australia, to 50,000 years B.P. I also have modest confidence that the populations of the highlands of New Guinea and the non-Eurasian component of Aborigine ancestry derive back to this period of first settlement. Looking at the set of trees above I am simply not confident that East Asians and Europeans separated as half as long ago as they did from Oceanians. One part of the solution though could be admixture. I modestly accept the proposition that South Asians are a hybrid population, and their position between West Eurasians and East Eurasians, but closer to the former, has to do with admixture between and ancient substrate and a West Eurasian population which was intrusive to the subcontinent within the last 10,000 years. A similar model may apply to East Eurasia, where these populations are a compound of an ancient group which was distantly related to those of Sahul, and an intrusive group from the fringes of Siberia. The relative closeness of East Asians to Oceanians (in particular, Papuans, who do not seem to have Austronesian admixture) can then be explained by this common ancient ancestry during the Paleolithic. The current pattern of East Asian variation south of the Amur may be due mostly to a demographic expansion of farmers from a locus of agricultural innovation somewhere in northern China. Of course there are plenty of models one could construct verbally, and find some support for the literature. My own preference, though only weakly at that, would be a separation of West Eurasians and all other non-Africans ~40,000 years ago. Then a separation of Oceanians from all other non-West Eurasian non-Africans. Then the separation of Amerindians from the East Eurasians. And then finally an expansion of a subset of West Eurasians and East Eurasians during the Holocene which replaced by and large the Southeast Eurasian population which spanned India to the fringes of Sahul. This does not negate the possibility (likelihood in fact) of gene flow around the northern fringe of Eurasia. But at the end of the day these are the days for humility and caution. Naturally in the course of writing I will forget this on occasion, but the response is not to refute and assert boldly ex cathedra one's own position.