Nobel Week Continues With the Chemistry Prize, Awarded To... 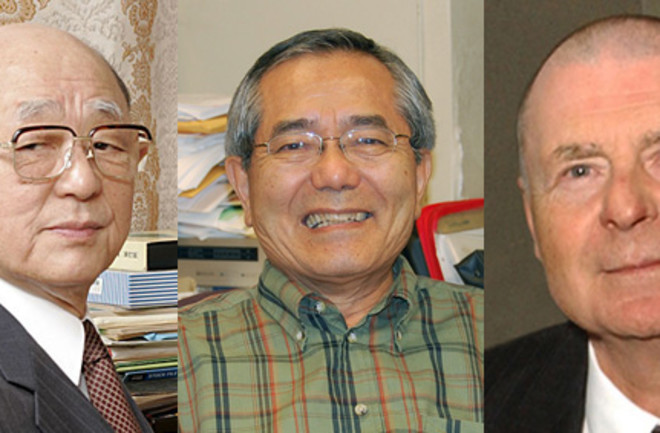 Akira Suzuki, Ei-ichi Negishi, and Richard Heck. These three scientists won the Nobel Prize for Chemistry this morning for their discoveries that made it easier and cheaper to build long carbon chains in the lab, and use those chains to develop new drugs, build electronics, and more. Despite the ubiquity of carbon chains in nature, they're hard to make in the lab at room temperature. The three chemists independently created essentially the same way to skirt this problem, using palladium to link carbon atoms through a process called palladium-catalyzed cross coupling. The palladium is a go-between, bonding to carbon to bring its atoms closer to one another than they could go on their own. The carbons then break their attachment to palladium and bond together in chains.

"What palladium does is to lower those energy barriers between atoms to make it easier for these reactions to occur," says chemist Joseph Francisco, president of the American Chemical Society. "Some reaction processes that required hundreds of degrees Celsius in order to make those reactions go can often be done with this at room temperature. You can imagine the energy savings of producing new materials." [Scientific American]

Because the three chemists' method is so easy to use, it shows up across fields. Claes Gustafsson of the Nobel committee says electronics companies use a version to create thin monitors and TVs. But the most important applications are in the pharmaceutical industry.

"There have been calculations that no less than 25 percent of all chemical reactions in the pharmaceutical industry are actually based on these methods," Gustafsson said. [AP]

However, these three are not the first to take home the prize for linking carbon atoms.

Forming carbon-to-carbon bonds has long been a focus of chemistry, and various methods—starting with Victor Grignard's use of magnesium to help bind carbon atoms in 1912—have been awarded the chemistry Nobel."This won't be the last one," Francisco says. "What this does is add to the toolbox for a chemist in terms of tools that they can use to build [compounds] more cleanly and more efficiently." [Scientific American]

to two scientists for their work with graphene, a material made of carbon sheets one atom thick. All this credit for carbon work pleased David Phillips, president of Britain's Royal Society of Chemistry:

"I'm pleased to say this year's Nobels have had a distinctly chemical flavour." [The Guardian]

Related Content: 80beats: The 2010 Nobel For Physics Goes For…

80beats: The Nobel Prize For Medicine Goes To…

DISCOVER: 10 Obscure Elements That Are More Important Than You'd Think