Nobel Prizes! We all want one, don’t we? While fantasizing about heavy gold medallions and the Swedish Nobel Assembly, I wondered how many of the Nobel Laureate prizes in Physiology and/or Medicine have gone towards scientists studying infectious diseases, immunology and the tropical medicine field. Snooze button alert, am I right? This is the product of a one-track mind so you have my apologies. But! If it’s any consolation, there’s a story hidden in this article of a Nobel Laureate Nazi sympathizer that infected mental patients with malaria to cure them of their psychoses.

Let’s get down to numbers. As of 2011, this prize has been awarded 101 times to 199 scientists for their research in this field. In recent years, the Nobel Prize has often been awarded jointly to two or three scientists for either collaborative research or for research that is similar in scope and specialty. Of those 101 occasions, 22 of these awards have been given to 39 researchers for their work in infectious diseases, virology, parasitology and/or immunology. Only one woman is on this list, Françoise Barré-Sinoussi, for her incredible work with Luc Montagnier in identifying HIV at the height of the HIV/AIDS epidemic in the 1980s.

The Nobel Medal for Physiology or Medicine is embossed with the Genius of Medicine "holding an open book in her lap, collecting the water pouring out from a rock in order to quench a sick girl's thirst." Description from NobelPrize. Click for image source.

So roughly one-fifth of the Nobel Prizes in medicine have gone to scientists making breakthroughs in the study of infectious diseases or in the immunological response to those diseases, indicating how crucial this particular field of medicine is to the scientific community. We’re not talking dermatology or podiatry here, folks.

In the early years, the Assembly awarded prizes for game-changing advances in the research of big killer diseases of the day - diptheria, tuberculosis and malaria, to name a few. The development of a yellow fever vaccine (1951), discoveries of vital antibiotics that are still used today globally (1939, 1945 and 1952), and the finding that HPV causes cervical cancer (2008) are just a few of the discoveries that the Nobel Assembly considered so revelatory to the field of medicine. Until the past century, how infectious diseases entered the body, their mechanisms of pathogenesis and even their treatment was largely unknown. Malaria is transmitted by mosquitoes? Not known till 1899 and Sir Ronald Ross’s discovery of the parasite hiding inside the stomach of an Anopheles mosquito was justly recognized by the Nobel Assembly in 1902. Lice transmit typhus? Charles Nicolle’s finding won him a good amount of money and worldwide recognition/obscurity in 1928. In 1954, a trio of American researchers were awarded the Nobel for identifying a method to culture the polio virus, launching the beginning of the end of polio’s affliction on humanity.

Many of the awarded discoveries laid the foundation for productive research that has led to profound advancements in disease and pest control, the emergence of the field of public health, development of the pharmaceutical industry and the industrial production of vaccines, antibiotics, and antivirals. Life-changing stuff, ya’ll. Flipping through this list is a reminder of how far we’ve come in the past century in establishing our domain over bacteria and viruses that previously wiped us out with shocking regularity. In fact, some of their findings and methods are so commonplace, hell! even banal, in today’s laboratories that it’s like stepping into a science time-warp reading about their discoveries. Thanks to these scientists, we possess the complex knowledge of genetics, immunology, antibiotics, vaccines and their respective methods to identify, culture and combat new diseases.

The list of winners is below and includes the year they were awarded, their country of origin and the award’s justification from the Nobel Assembly in quotes; those quotes come from the official website of the Nobel Prize. I’ve included in the list a few winners awarded for their work in immunology and antibiotics; while these are not strictly related to infectious diseases, their research laid a strong foundation for future infectious disease work and, well, they’re related and it’s important so get over it.

Scroll past this engrossing list that I’ve compiled for your disease-seeking pleasure.

1901 Emil Adolf von Behring (Germany) "for his work on serum therapy, especially its application against diphtheria, by which he has opened a new road in the domain of medical science and thereby placed in the hands of the physician a victorious weapon against illness and deaths." Victorious weapon! I'd think the flowery language alone should do the trick. In any case, von Behring developed a diphtheria antitoxin, known as a "serum," by repeatedly injecting a horse with diphtheria toxin.

A Future Pharmacy: An editorial cartoon mocking Emil Adolf Von Behring and his discovery of serum therapy, in which a diphtheria antitoxin was developed by repeatedly exposing a horse to the diphtheria toxin. Click for source.

1902 Sir Ronald Ross (United Kingdom) for his discovery that malaria is transmitted by mosquitoes.

1905 Robert Koch (Germany) "for his investigations and discoveries in relation to tuberculosis.”

1907 Charles Louis Alphonse Laveran (France) "in recognition of his work on the role played by protozoa in causing diseases."

1927 Julius Wagner-Jauregg (Austria) "for his discovery of the therapeutic value of malaria inoculation in the treatment of dementia paralytica." In 1927, Wagner-Jauregg received the Prize for his discovery of pyrotherapy, the treatment of mental disease by febrile diseases. Besides being a Nobel Laureate, Wagner-Jauregg was also a Nazi sympathizer, anti-semite and racial hygienist. A charmer of a man who forced sterilization upon the mentally ill and the criminal and the so-called “father of fever therapy(1)."

Since 1887, he had been investigating the phenomenon of how fever, as induced by tuberculosis or St. Anthony’s Fire, may reduce the effects of psychosis caused by tertiary syphilis. Bacterial infections didn’t seem to do the trick in terms of bringing about recurrent high fevers and so in 1917 Wagner-Jauregg turned to the malaria parasite. Turns out, malaria is an excellent specimen for this sort of thing and led to its usage as an established treatment for paralytic dementia and neurosyphilis. An application of quinine would end the fever therapy, eliminating the infection and leaving the patient free of his psychoses. For this hot discovery, Wagner-Jauregg is the only psychiatrist to have ever won the Nobel for investigative fieldwork on mental illness.

Charles Jules Henri Nicolle (France) for his discovery that lice transmitted typhus. Nicholle was a master researcher of infectious diseases and made many discoveries regarding the pathology and epidemiology of brucellosis, leishmaniasis, measles, rinderpest, scarlet fever, Mediterranean spotted fever, toxoplasmosis, trachoma and tuberculosis. Nicholle’s typhus work was performed in Tunisia using chimpanzees and toque macaques (2). 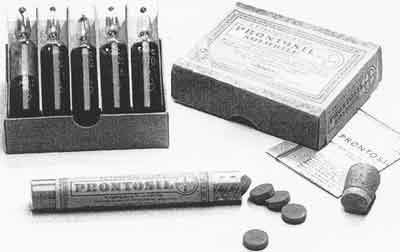 Vials and tablets of prontosil, an industrial dye discovered to have antibacterial properties by Gerhard Domagk. Click for source.

Gerhard Domagk (Germany) "for the discovery of the antibacterial effects of prontosil.” Prontosil was the first drug to be found effective against bacterial infections and Domagk made quick use of this fact - as a streptococcal infection threatened his daughter, his treatment with prontosil prevented the therapeutic amputation of her arm.

Max Theiler Union (South Africa) "for his discoveries concerning yellow fever and how to combat it." He had an enormous forehead. His award is the only one that has gone towards a virus vaccine.

There's really no reason why I'm including this photo of Selman Waksman here aside from the fact that it's so gloriously Science!-y. Lab coat, check. Flask of something liquid, check. Mood lighting, check. Click for image source.

John Franklin Enders, Thomas Huckle Weller and Frederick Chapman Robbins (all from the United States) "for their discovery of the ability of poliomyelitis viruses to grow in cultures of various types of tissue." Their work laid the groundwork for Jonas Salk's development of the polio vaccine.

1958 Joshua Lederberg (United States) "for his discoveries concerning genetic recombination and the organization of the genetic material of bacteria."

Peyton Rous (United States) "for his discovery of tumour-inducing viruses." In 1911, Rous found that some cancers can be transmitted by viruses, known as retroviruses. Forty years later, he was awarded for his work.

1969 Max Delbrück, Alfred D. Hershey and Salvador E. Luria (all from the United States), "for their discoveries concerning the replication mechanism and the genetic structure of viruses." The trio discovered that bacterial resistance to bacteriophages (viruses that infect bacteria) was a result of random mutations.

1976 Baruch S. Blumberg and D. Carleton Gajdusek (United States) "for their discoveries concerning new mechanisms for the origin and dissemination of infectious diseases." These guys were awarded for their research on kuru, a disease caused by human prions. Fun fact: Blumberg also discovered the hepatitis B virus and developed the diagnostic test and vaccine for it.

Niels K. Jerne (Denmark), Georges J.F. Köhler (Federal Republic of Germany) and César Milstein (Argentina and the United Kingdom) "for theories concerning the specificity in development and control of the immune system and the discovery of the principle for production of monoclonal antibodies."

J. Michael Bishop and Harold E. Varmus (United States) "for their discovery of the cellular origin of retroviral oncogenes."

Stanley B. Prusiner (United States) "for his discovery of Prions - a new biological principle of infection."

2005 Barry J. Marshall and J. Robin Warren (Australia) "for their discovery of the bacterium Helicobacter pylori and its role in gastritis and peptic ulcer disease." Marshall is famously known for downing culture medium loaded with H. pylori to directly prove that the bacterium is responsible for causing ulcers.

2008 Harald zur Hausen (Germany) "for his discovery of human papilloma viruses causing cervical cancer," along with Françoise Barré-Sinoussi and Luc Montagnier (France) "for their discovery of the human immunodeficiency virus.”

The Nobel Prize website has a fleshed-out timeline for every Laureate and includes their biography, a short article about their research, the lecture they delivered to the Nobel Assembly and much much more.