Nobel Prize in Medicine Awarded for New Weapon Against Cancer 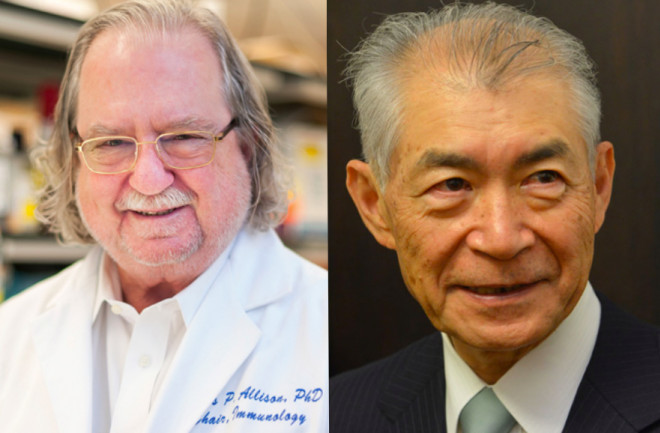 James Allison (left) and Tasuku Honjo we awarded the Nobel Prize in Physiology or Medicine on Monday for their discovery of "cancer therapy by inhibition of negative immune regulation." (Credit: Nobel Prize) (Inside Science) — The 2018 Nobel Prize in physiology or medicine has been awarded to James P. Allison, from the University of Texas MD Anderson Cancer Center in Houston, and Tasuku Honjo, from Kyoto University in Japan, "for their discovery of cancer therapy by inhibition of negative immune regulation." This type of therapy is a new approach in cancer treatment. Instead of targeting the tumor cells themselves, it releases the brakes on immune cells, allowing them to attack cancer cells. The drugs that have been developed from their discoveries are known as checkpoint inhibitors. "It is all about interference with the brakes of our immune system as a means to unleash this defense and harness it to develop treatment of cancer," said Klas Karre, an immunologist at Sweden's Karolinska Institute and a member of the Nobel committee, after the announcement in Stockholm this morning. Allison, an immunologist, studied a protein receptor called CTLA-4 on T-cells, which acted as a brake to keep the immune system under control. He realized that by blocking that brake the immune cells could be unleashed on tumor cells, and he began developing therapies based on that principle. In 2011 a drug based on CTLA-4, ipilimumab, was approved for treating melanoma. More than 20 percent of people using the drug have complete remission from the disease. Honjo, also an immunologist, discovered a second receptor called PD-1 that also acted as a brake, but with a different mechanism of action. This discovery has also proved to be effective in developing treatments. Two drugs based on PD-1 inhibition, nivolumab and pembrolizumab, have been approved for treating melanoma and lung cancer. Checkpoint inhibitors have proved to be stunningly successful treatments for many different kinds of cancer, in particular, melanoma. They also show promise for lung cancer, kidney cancer and lymphoma. Combinations of the two types can be even more effective. That ability to work against different types of cancer is unusual and shows great promise, said Karre. “It will be exciting to see in the future exactly how broadly this can be applied.” [This story originally appeared on Inside Science.] Editor's Note: An earlier version of this story misspelled the name of Tasuku Honjo.

More From Discover
Health
10 Science-Backed Ways to Boost Your Brain
Health
Extreme Fatigue: 4 of the Longest-Lasting Sporting Events
Health
What Science Says About the Weight-Loss Potential of The One-Meal-a-Day Diet
Health
How Saliva Changes The Flavor Of Food
Health
Walking vs. Running Benefits: Should You Walk or Run for Exercise?
Health
What is the Purpose of Hiccuping?
Recommendations From Our Store
My Science ShopDiscover STEM Kits
My Science ShopDiscover 2022 Calendar
My Science ShopStrange Science
My Science ShopElements Flashcards
Shop Now
Stay Curious
Join
Our List