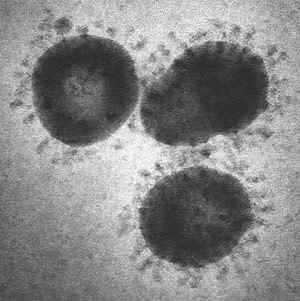 When a 49-year-old Qatari man fell ill in England this month, doctors realized that his respiratory problems and kidney failure were due to a previously unknown virus

. Earlier this year, a nearly identical virus, 99.5 percent genetically identical to be exact, killed a middle-aged Saudi man. While a new disease is always cause for caution, there have been only two confirmed cases thus far. So what's the worry? The problem is that this new virus belongs to a family called coronaviruses

, a family that includes the common cold...and the deadly and fast-spreading Severe Acute Respiratory Syndrome

, or SARS. While the new respiratory disease is certainly more harmful than a cold---as of Monday, the Qatari patient remains in critical condition

---it appears to be much less contagious than SARS: nobody who has been in contact with the most recent case has contracted the illness

. But because of the virus's severity and its relation to SARS, which first appeared in China in 2002 and caused a global outbreak

of over 8,000 confirmed cases and 774 deaths the following year, authorities such as the World Health Organization and United Kingdom's Health Protection Agency remain on the alert. Health workers are investigating whether a few other recent cases of respiratory illnesses in the Middle East could be due to the same coronavirus. Until they learn more about this new virus, health organizations won't be able to breathe easy.