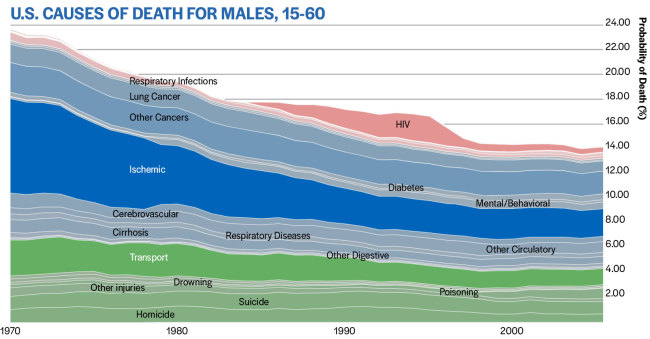 IHME visualizations allow easy comparison between patterns of disease, injury and death over periods of time. At left, a stream graph depicts the shifting probability that a 15-year-old male in the United States will die before reaching the age of 60, broken down by cause. According to the institute’s research, the probability of adult men dying early from traffic accidents or cerebrovascular disease more than halved between 1970 and 2006, while death by suicide held relatively steady through the years.

Newly published data point to seven causes that accounted for more than 40 percent of years of life lost to premature death in the United States in 2010. Ischemic heart disease tops the list, followed, in order, by trachea, bronchus and lung cancers; stroke; chronic obstructive pulmonary disease; road injuries; suicide; and diabetes. Rising fast were kidney and other urinary organ cancers as well as Alzheimer’s disease and other dementias. A deep dive into the numbers reveals the U.S. lagging behind other wealthy and even middle-income nations in wide-ranging aspects of health, from preterm birth and maternal mortality rates to life expectancy.

Check out this interactive version of the visualization to find out more about cause of death trends for the United States and Australia, 1970-2006. 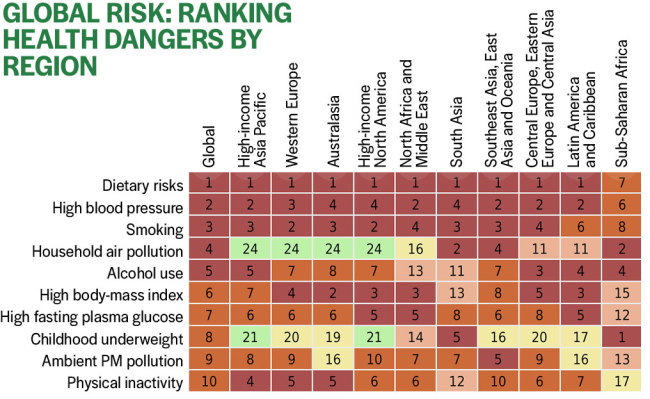 Relatively few risk factors account for a large proportion of the global burden of disease. Smoking and indoor and outdoor air pollution together lead to more than 13 percent of total years of healthy life lost — and they wreck the body almost identically. “Particulates get inhaled, go into the lung, and the harm they do seems the same,” Murray says.

Dietary risks in aggregate top the rankings worldwide: In the U.S., too little fruit is the lead factor. In Italy, it’s high sodium. Murray says Americans could alter diet, tobacco use and exercise to powerful effect. “Where it’s good for you and it’s easy, why not do it?” he says. Risk varies by region. Household air pollution is the fourth-highest-ranked risk worldwide, but of much less consequence in the United States and Canada, where it’s ranked 24th and marked on the grid in coral green.

Rank and compare causes and risks in different countries by age group and sex with this interactive version of the visualization.

When Americans imagine an epidemic, they are most likely to think of HIV. But as the dark red swath on the map above shows, in much of the world an equally formidable foe is tuberculosis, a bacterial disease characteristically concentrated in the lungs. Globally, the burden of disease from TB in 2010 ranked 13th overall, ahead of drug use, suicide, diabetes or any kind of cancer. In Southeast Asia, TB was second only to strokes. Based in part on an early global burden analysis, The Global Fund to Fight AIDS, Tuberculosis and Malaria was started in 2002. 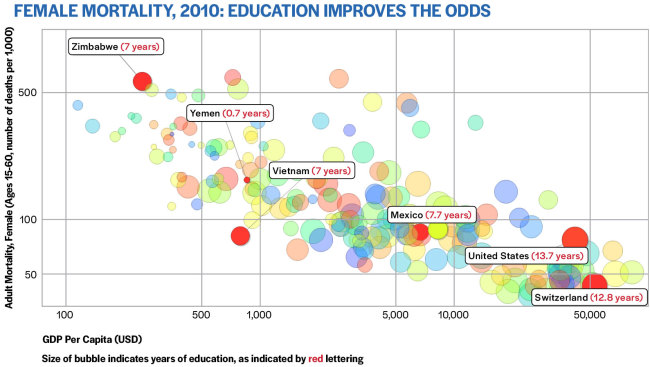 To live the longest and healthiest life possible, get smarter. IHME data show that past a certain threshold, health and wealth (as indicated by female adult mortality rate, vertical axis, and per capita gross domestic product, or GDP, horizontal axis) are just weakly correlated. However, overall health is closely tied to how many years people spend in school (indicated by circle size). Mexico, for instance, has a fifth the per capita GDP of the United States, but, for women, more than 50 percent of the latter’s schooling.

In line with the trend, Mexico’s female adult mortality rate is only narrowly higher. Vietnam and Yemen have roughly equivalent per capita GDP. Yet Vietnamese women average 6.3 more years in school and are half as likely to die between the ages of 15 and 60. Outliers are Switzerland and Zimbabwe, with one of the world’s lowest and highest female adult mortality rates, respectively, and a 200-fold difference in per capita GDP. “Economic growth is also significantly associated with child mortality reductions, but the magnitude of the association is much smaller than that of increased education,” comments Emmanuela Gakidou, IHME’s director of education and training. “One year of schooling gives you about 10 percent lower mortality rates, whereas with a 10 percent increase in GDP, which is huge, China has achieved it for a few years, your mortality rate would go down only by 1 to 2 percent.”