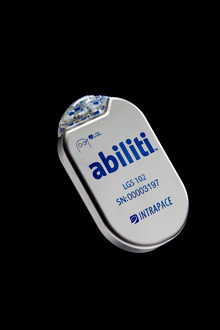 Not many people would be excited about getting shocks to their vagus nerve, but a new electronic device implanted into the abdomen does just that in an effort to keep appetites in check. The tiny device, called abiliti and made by Intrapace, attaches to the vagus nerve, which sends status updates about the body's organs to the brain. The pacemaker then hacks the nervous system's normal communication, according to the company's website:

Intrapace reports that the 65 study participants in the initial trials have lost on average 22 percent of their body weight; the biggest loser dropped 38 percent. (These results haven't been published or peer-reviewed.) The device is billed as an alternative to more invasive weight-loss procedures, like stomach bypasses or gastric bands

, and may have fewer side effects. It is implanted into the abdomen, where it floats around near the stomach, connected to nerves by electrodes through which it senses how extended the stomach is and sends the "not hungry" signals to the brain. The AP's Maria Cheng

talked about the experience with an abiliti patient who dropped 22 of his 229 pounds:

He said they make him feel full after finishing about half the amount of food he would normally eat. "It feels like a little pressure on my stomach or a tickle, but it's not a bad feeling," he said in a telephone interview. "It's been like a little guide to help me change my life," he said.

The pacemaker also has an accelerometer, so your doctor spy on you to find out how much you eat and how often you are exercising (though presumably it wouldn't work for an exercise like biking), the website states

The system also collects the output of the food detection and activity sensors intended to provide a detailed picture of food consumption and exercise trends. These data can be downloaded at the physician’s office and may be used by patients and their healthcare provider to monitor their progress toward weight loss goals.

Some experts worry that the brain might get used to the stimulation and ignore it; Stephan Rossner, an obesity expert quoted by Cheng

"A lot of obese patients eat because they're depressed, they can't sleep at night, or they have nobody to have sex with," he said. "So whatever you insert into their stomach, they can out-eat that device because it's other things that drive them to consume."

Sadly, the device is only currently available in Germany, Spain and the UK, so us chubby, lazy Americans will have to wait until 2014 to have our bionic, self-regulating stomachs implanted. Related Content: Discoblog: NCBI ROFL: Eating behavior and obesity at Chinese buffets.

Science Not Fiction: The Obesity Bug, And Other News From Nerdland

Reality Base: Will Obesity Regulation Turn the U.S. Into a Police State?

The Paleo Diet: Should Modern Humans Eat the Way Our Ancestors Did?